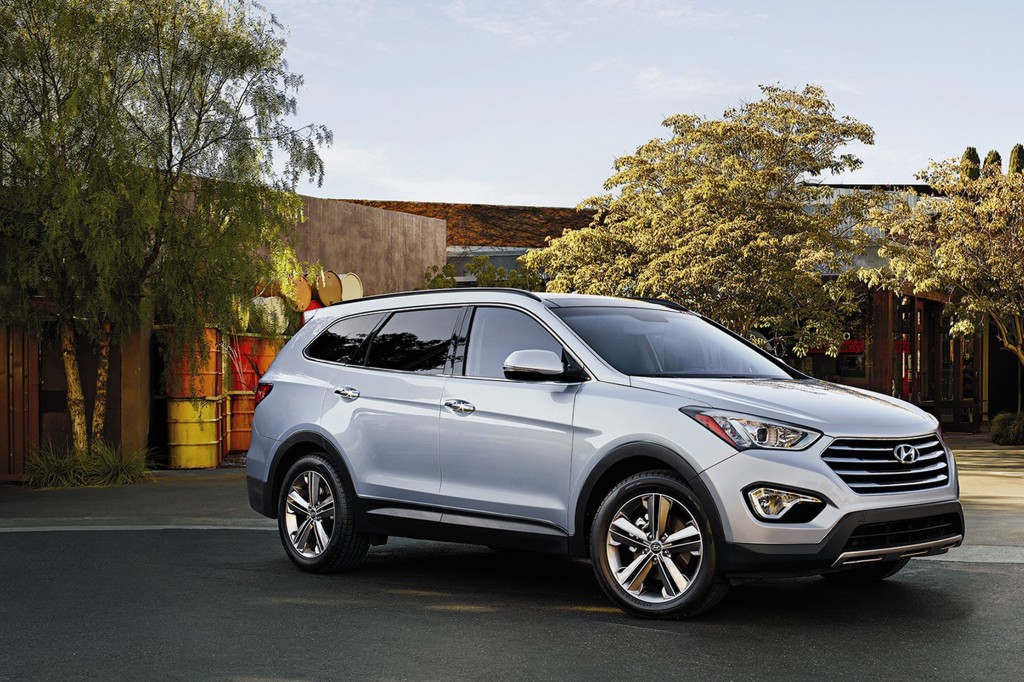 If you’re a parent, you know how much children cost. This puts many a parent in bargain-hunting mode. Which brings us to Hyundai, the Korean automaker long known for selling four-wheeled, blue-light specials — or at least that’s the image many consumers still have in their minds. Nevertheless, while the company’s new models have long eschewed the discount rack, they still offer compelling value.

Given the amount of standard gear, you would not only say that it’s not just an undeniable value, it’s positively luxurious. But value and luxury are words rarely used in the same sentence. So is the 2015 Santa Fe a true luxury vehicle or just a pretender?

The Oxford English Dictionary defines luxury as “the state of great comfort and extravagant living or an inessential but desirable item.”

The cabin is roomy and comfortable, with generous head and leg room up front, and equal amounts of the same in the second row. Third-row space seems a bit tight, but most of the time, these seats will be folded to make best use of the available cargo space.

That said, the second-row captain’s chairs’ seating position felt a little low for adults. Up front, seat comfort was very good, providing good support during long stints behind the wheel. The interior was fairly quiet, as well.

The instrument panel is easy to understand and operate, and the gauges are easy to read. Some lesser-used controls, such as the heated steering wheel button, are buried on the left side of the steering wheel where it’s hard to see or reach. More useful were the steering-wheel mounted audio controls.

And while frosty mornings left me appreciative of the heated seats and steering wheel, it’s annoying that they shut off after a certain amount of time, rather than staying on. That said, despite the long list of standard gear, the quality of the interior, while very good, is clearly not that of a premium automobile.

Such snotty considerations may not matter once you slide behind the wheel.

For 2015, Hyundai has revised the steering and suspension of the Santa Fe, although its personality remains intact. The Santa Fe delivers a compliant ride that ably soaks up bumps without undue body motions. While pockmarked pavement showed the body structure to be fairly stiff, it brought with it a symphony of interior rattles and caused the second-row captain’s chairs to vibrate noticeably. Handling is not sporty, but the suspension revisions lend the driver a bit more confidence, with little of the excessive softness once typical of Korean automobiles. Drivers can adjust steering feel, choosing Normal, Sport or Comfort modes. Normal mode is the best, as Sport feels artificially heavy and Comfort seems too loose.

There’s one driveline: a 3.3-liter V-6 mated to a six-speed automatic transmission provides an effortless, refined stream of power. The six-speed automatic is responsive most of the time. However, if you need extra power while cruising at highway speed, you will have to wait for it to downshift.

Once you leave the gas station, you’ll find it tries to mimic the RX350’s otherworldly serenity, but never quite makes it.

And while the Santa Fe is certainly comfortable, even fully loaded, it’s not extravagant. You’d never describe it as “an inessential but desirable item” — it’s too practical to wear that label.

That’s because luxury goods possess the perception of superior quality. The Santa Fe is a well-designed vehicle with upscale airs. No doubt it’s a decent value. But there’s no mistaking it for a premium vehicle; it’s the cubic zirconia of the three-row crossover world.