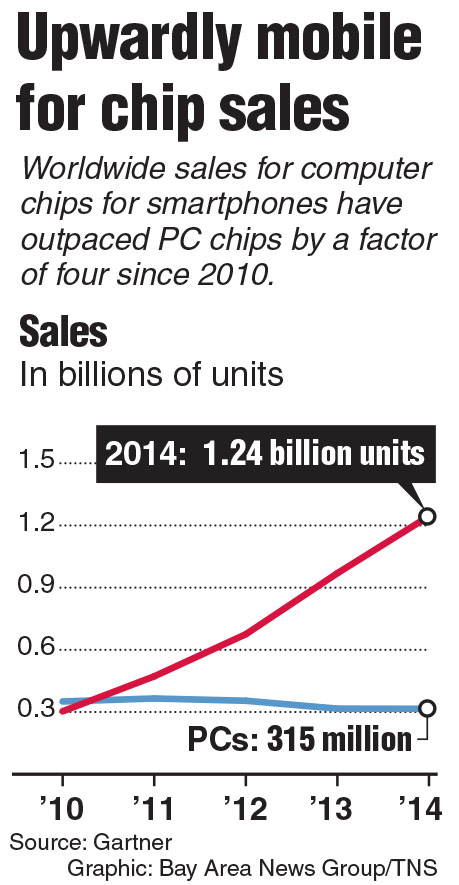 With a flurry of new chips and strategies, Intel is mounting its biggest push ever into a mobile-computing market that threatens one of its key business lines.

It’s not the first time.

In 1996, Intel supplied the processor for the Nokia Communicator that had early features of smartphones, but it was replaced two years later by an AMD chip.

In 1999, it supplied the computer processor for the early BlackBerry, but sold the business to Marvell in 2005.

In 2004, it supplied the brains for the Palm Treo 650, an early smartphone that was discontinued four years later.

And in 2006, to its lasting regret, it passed on a request from Apple to make a processor for the iPhone, sending the Cupertino, Calif., company into the arms of competitors.

Now, under new CEO Brian Krzanich, Intel is trying again. It spent billions in 2014, and will again this year, to gain a mobile foothold, as it introduces new Atom microprocessors for smartphones and tablets.

It’s a critical move for Intel, which faces declines in the sales of personal computers, where Intel dominates as the supplier of silicon brains.

Just last week it revised a first-quarter revenue estimate downward by nearly $1 billion, citing slower-than-expected PCs sales. The industry-watching International Data Corp. predicts a 4.9 percent fall in PC sales in 2015, with a $201 billion market in 2014 falling to $175 billion by 2019. Tablets are nibbling at the PC market and smartphone usage has soared.

But she called Krzanich “a huge breath of fresh air. He’s got a lot of work to do. It’s a huge ship, and turning a ship of that size takes a lot of time. He is taking the right steps, the question is, will they be able to catch up?”

In March, Intel announced a range of new products for mobile computing at the Mobile World Congress in Barcelona. In January, Intel combined its mobile and personal-computing businesses into a single computing group, recognizing the two product lines will probably merge in the future.

It has also formed alliances with two Chinese companies that make chips for mobile phones and consumer-electronic products. And last year, it bought Basis Science, which makes a wrist-worn health tracker, adding to its Internet of Things arsenal.

“They’re determined not to miss the next big thing,” said Mark Hung, of the technology-research group Gartner.

Intel’s biggest lost opportunity happened in 2006, when the company turned down a request from Apple for a chip to power a new phone, fearing that it couldn’t economically make it for the cost and volume Apple needed. So Apple designed its own chip using technology licensed from British firm ARM Holdings and had Samsung make it.

Today, most mobile devices run on ARM’s designs, which offer low power consumption and longer battery life and cost advantages. Seven hundred million iPhones later, Intel is trying to find a way back in. The company notes that it hasn’t languished, growing revenue from $35.4 billion in 2006 to $56 billion in 2014. It bought Infineon’s wireless business in 2010, making it a supplier of modems — but not processors — for mobile devices.

Last year, Intel posted a $4.2 billion loss in its mobile group by essentially subsidizing the purchase of its tablet chips by tablet makers. The company expects its mobile group to break even in 2016.

“This is the price you pay for sitting on the sidelines for a number of years and then fighting your way back into the market,” Intel’s Bryant said last November. “We will improve this. We will not continue to accept a business with multibillion-dollar losses, but this is the price you pay to get back in. We are getting back in.”