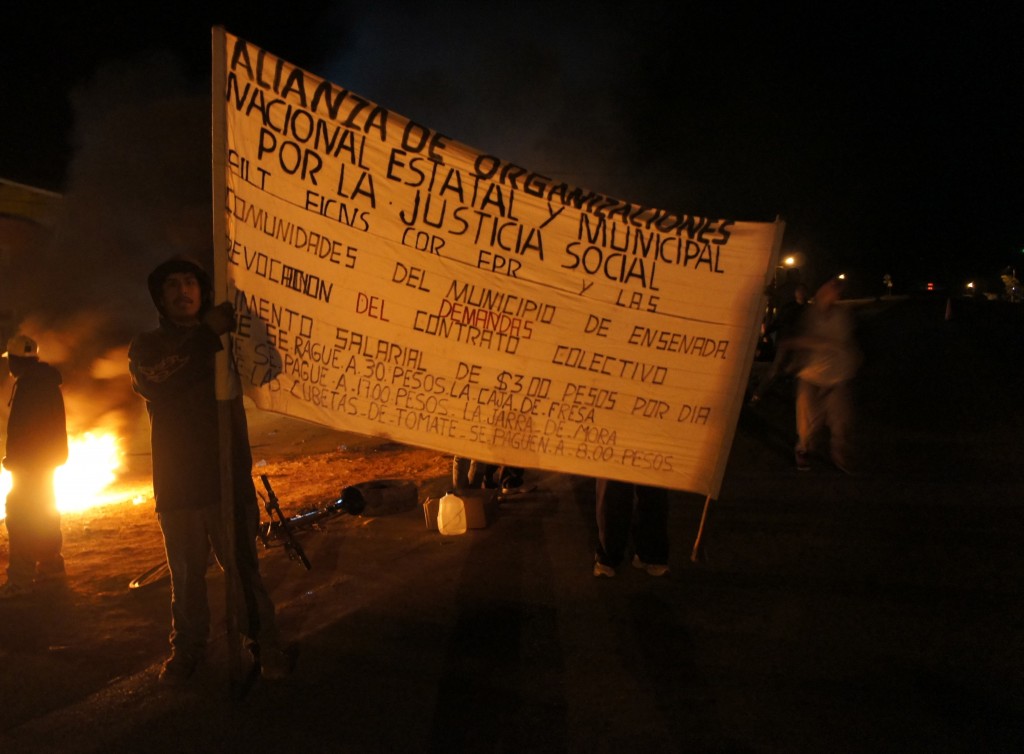 Workers at large, export-oriented farms in the Mexican border state of Baja California have led a week of violent protests over low pay, abuses and poor conditions, threatening a harvest that supplies millions of dollars’ worth of tomatoes, strawberries and other crops to the United States.

Burning tires and tossing rocks at vehicles, hundreds of farmworkers have blocked Baja’s main north-south highway on and off, and as many as 50,000 are believed to be on strike statewide as of Tuesday.

Baja California Gov. Francisco Vega said over the weekend that the harvest – and thousands of jobs – were at risk. “If the fields continue without a workforce, the harvests will be lost and that will affect everyone who depends on this part of the economy,” his office said in a press statement.

Many of the workers are migrants from southern Mexican states like Guerrero and Oaxaca who toil at huge hot-house farms just south of Ensenada. Their demands – health care, overtime pay, days off, an end to abuse by field bosses and more pay than the $8 many earn for a full day of stoop-labor – echo those of farmworkers in the United States 40 years ago.

“We all saw it as something normal for them (farm owners) to suspend people from work for three or four days, or fire them without severance for demanding respect for our rights, for demanding overtime or days off,” said Jose Ignacio Garcia, a 19-year-old who has worked the fields in Baja since he was 12 and is expecting his first child in August. “We got used to working more than 10 hours a day for 100 pesos ($7), but that doesn’t even buy the minimum necessities you need to live, to support a family.”

Demonstrations have exploded into rock-throwing scuffles with riot police and the arrest of about 200 protesters. Many businesses in the area have closed, and the highway blockades prompted the U.S. consulate in Tijuana to advise travelers – which include many U.S. citizens with retirement or vacation homes on the peninsula – to exercise caution.

Baja California’s state government has used police armored vehicles to break up road blockades and warned “that there will be no tolerance for those who use demonstrations to act outside the law.”

The growers’ association representing farms that dominate the coastal valleys around San Quintin declined to respond to requests for comment, but some companies have defended their practices and appealed for calm.

“We respect everyone’s right to demonstrate peacefully … but we condemn the violence and looting,” the commercial farm BerryMex, a branch of the U.S. Reiter Affiliated Companies, said in a statement. While the company didn’t specifically say what it pays employees, it did say they get health insurance, overtime and maternity leave, saying “our main objective continues to be the well-being of our employees.”

But of those who live in the area, about 110 miles (180 kilometers) south of Tijuana, 64 percent lack adequate housing and access to water, power and sanitation; 47 percent lack health-care services; and 59 percent of children between 15 and 17 are not in school, according to Mexico’s National Institute of Statistics and Geography. Many are functionally illiterate.

“The economic and social problems in San Quintin have to do with social inequality,” Diaz Bautista said.

Workers say the frustration over grindingly low pay is mingled with stultifying labor and petty abuse. Protesters say they want wages raised to about $20 a day, an end to arbitrary firings and access to health care, water and breaks.

Celina Sierra, 27, who has worked in the fields since she was 14, supports her two children and her mother on her paycheck.

“We get up at 4 in the morning to wait for the truck to take us to the fields,” Sierra said. “We get to the fields at 6:30 even though we’re not supposed to start work till 7 … They never pay overtime, they tell us we have to finish a harvest and work until four or five o’clock in the afternoon, bent over and sometimes without water.”

Pablo Alejo Lopez, the assistant interior secretary for Baja California state, said the state government has tried to open negotiations with the demonstrators, but the protesters’ main demand is that the growers send representatives to the talks, “something that, up to now, has not been possible,” he said.

“We know there are problems that have to be taken care of, ” Lopez said. “There are some very responsible companies, but there are also companies that take advantage of the weakness of the laws, the rules and policies. There is a lot to be done.”