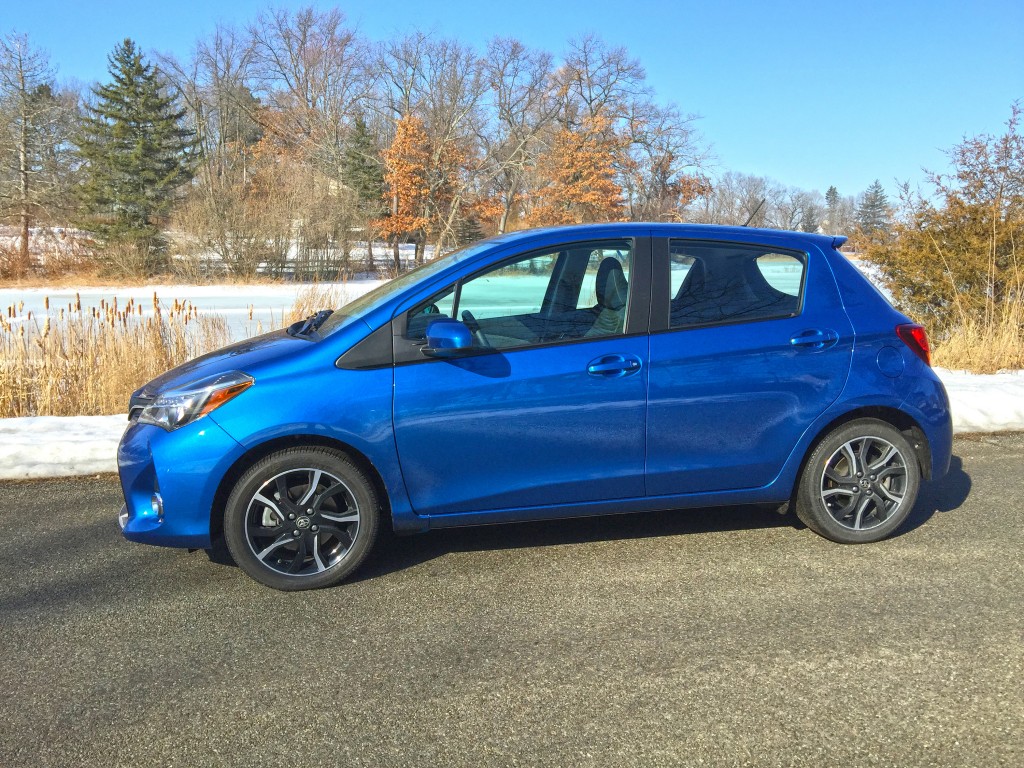 Can you buy a decent new car and pay less than $20,000 for it? Yes, in fact, you can, and here’s the big news: You won’t have to steel yourself for a total hose-out special. Increasingly, you can get a small car laden with many features that used to be reserved for higher-end vehicles.

A case in point is the Toyota Yaris. Once a tiny, boring box, the Yaris in 2015 has a new, modern, and attractive appearance — that is, if you approve of the angry-mesh-grille look that is so popular these days. Which I do. Toyota pretty much had to update; the city-car category is jammed with little hatchbacks at small prices. The new Yaris has to elbow its way through Ford’s Fiesta, the Honda Fit, the Kia Rio, Chevy’s Sonic and the Mazda 2, all worthy competitors.

The Yaris model we tested was the top-end SE five-door hatchback, equipped with a five-speed manual transmission, which comes in at $18,724. (The base model, the three-door Yaris L, is priced at $15,670.) But if you were expecting an el strippo look for an el strippo price, you would be pleasantly surprised. Remarkably sophisticated-looking for such a small car, the Yaris SE has projector-beam headlights with an LED light bar, LED daytime running lights, a black grille with piano black accents, a rear spoiler and 16-inch alloy wheels (versus the standard 15-inch wheels). Compare the 2015 Yaris to the ones from 2014 or earlier, and you’ll appreciate Toyota’s leap of faith in overhauling this small car’s appearance.

Looks would certainly be one reason to buy a new car, instead of used, at this price point. Another would be modern conveniences on the inside. Our Yaris SE had a 6.1-inch touchscreen, navigation (an $899 option) and Bluetooth connectivity. Cruise control, a leather-trimmed steering wheel and shift lever, and power windows and locks are all there, as is remote keyless entry. Having said that, don’t look for luxury or coziness: There’s no center arm rest, the seats are narrow and stiff — although not uncomfortable, even on a 100-mile highway run — and the overall feeling is still somewhat … economical.

Missing is a rearview camera, something you’ll find on the Yaris’s arch-competitor, the Honda Fit. Thinking about the number of young, inexperienced drivers who are likely to own a Yaris, this is disappointing. In fairness, most cars in this class don’t have one. It would be a welcome option, though.

Also missing is the kind of capacious rear storage the Honda Fit has so much of. The Yaris has 60/40 split-folding rear seats, but the amount of rear space you get when you fold them down doesn’t approach the 52.7 cubic feet the Fit can boast. Having said that, the rear seating area is surprisingly comfortable. I wouldn’t go so far as to call it “spacious,” but it’s no mere package holder; you could put kids back there, at least kids up through elementary-school age, and adults could stand it for short drives, at least.

If you think the Yaris seems like it’s much better suited for use around town than on a road trip, you’re not wrong, but a couple of hours on the highway, including a spate of rush-hour traffic, showed that it is capable enough and feels bigger than it is. You can push 70 mph comfortably, although you won’t forget you’re in an economy car. The SE model has upgraded suspension and brakes, and it shows. Wind noise was manageable, turbulence was minimal, and the 1.5-liter four-cylinder was reasonably competent. This is an older engine, teamed with a five-speed manual transmission versus the six-speed you’ll find on the Fit. Other competitors, including the Ford Fiesta and the Chevrolet Sonic, also have five-speed manuals as standard. The automatic transmission is an old-school four-speed. Today’s newest transmissions are much smoother and quieter. I would at least stay with the manual so I could get every last drop of shifting fun available. So, the Yaris may not have the latest and greatest under the hood, but it’s reasonably competent, especially as an around-town errand runner.

Subcompact shoppers are also concerned with fuel economy and safety. The Yaris bests its competitors with an impressive 30 mpg in town and 37 mpg on the highway. By comparison, the Chevrolet Sonic gets 26/35 mpg, and the Honda Fit gets 29/37 mpg. The 2015 Yaris did well in Insurance Institute for Highway Safety testing, rated Good in all but the small-overlap front-crash rating. Here again, it’s outgunned by the Honda Fit, which got Acceptable on the small-overlap test and was named a Top Safety Pick for 2015.

Why would you choose the Toyota Yaris? You might choose it if you’re a Toyota loyalist, or want to be one. You might like its styling better than that of its more prosaic-looking competitors. But there’s no doubt that you will have lots of other cars to check out before you make that decision.

Competition (all prices include destination charges):