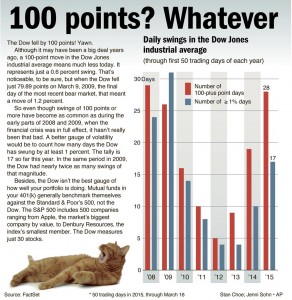 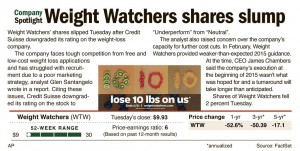 The guessing game over higher interest rates is making for a jerky stock market.

A day after their biggest gain in six weeks, U.S. stock indexes mostly fell on Tuesday as oil continued to slide and investors fretted over when the Federal Reserve will raise a key borrowing rate. Low rates have helped stocks soar over the past six years. The Fed kicked off a two-day meeting on Tuesday to discuss rates, and will release a policy statement on Wednesday.

Losses were small, but spread across industries. Nine of the 10 sectors of the Standard & Poor’s 500 index dropped, led by a 1.2 percent fall in raw-material companies.

“The economy is stronger, and can handle it and people will realize that,” he said. “But now we’re in the fear phase.”

Energy stocks sank as the price of oil slid for the sixth straight day to another six-year low. U.S. benchmark crude fell 42 cents to close at $43.46 a barrel in New York.

In its statement released Wednesday, the Fed is widely expected to drop the word “patient” in describing how long it will wait to raise rates. Many economists think that will signal that the Fed will make its first move in June.

Others aren’t so sure, with some predicting the central bank will wait until next year.

Mixed signals on the economy have been adding to the uncertainty.

U.S. employers have added more than 200,000 jobs in each of the past 12 months, and the unemployment rate has fallen to 5.5 percent. That is the lowest rate in seven years.

On the down side, a report on Monday showed output at the nation’s factories fell for a third straight month in February.

On Tuesday, the Commerce Department said construction of new homes plummeted 17 percent in February from the month before, to a seasonally adjusted annual rate of 897,000. Bad winter weather in Northeast and Midwest was mostly to blame.

Homebuilder stocks dropped on the news. Hovnanian Enterprises fell 8 cents, or 2.4 percent, to $3.27.

Other stocks in the news:

• Weight Watchers sank 20 cents, or 2 percent, to $9.93 after Credit Suisse downgraded its rating on the stock. The bank said the company faces tough competition from free and lower-cost weight loss alternatives.

In oil markets, Brent crude for May delivery, a benchmark for international oils used by many U.S. refineries, fell 43 cents to close at $53.51 in London. The Brent contract for April delivery expired Monday at $53.44 a barrel.

U.S. government bond prices rose. The yield on the 10-year Treasury note fell to 2.05 percent from 2.08 percent on Monday.