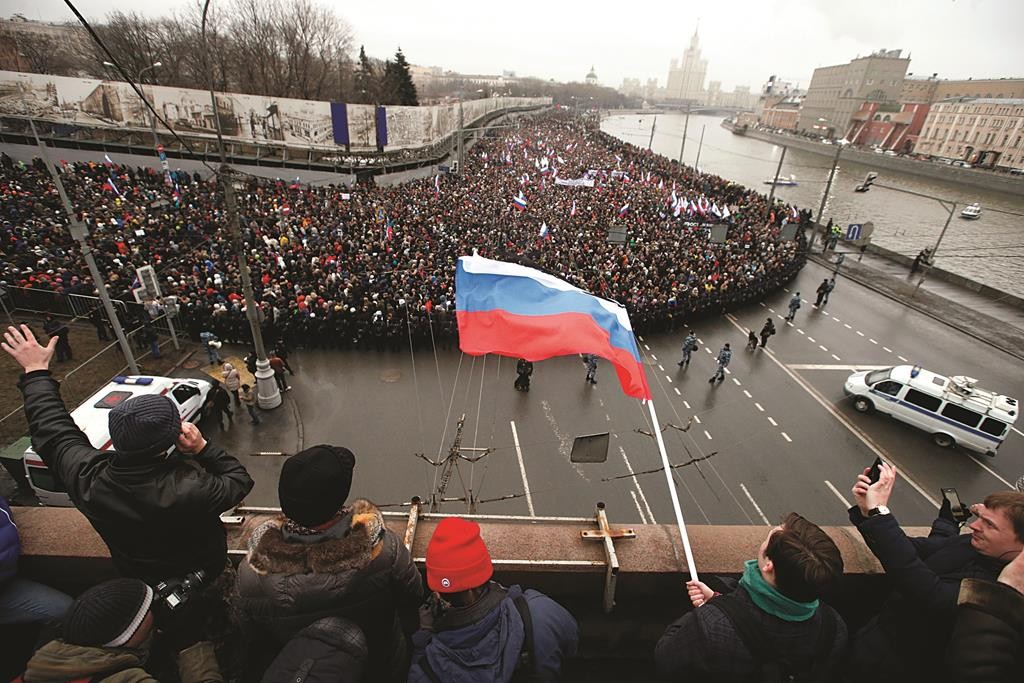 For the tens of thousands bearing flowers and tying black ribbons to railings in honor of slain Russian opposition politician Boris Nemtsov, the solemn march through the Moscow drizzle on Sunday was a time for silence, not slogans.

The marchers occasionally broke into chants of “Russia without Putin,” or “Say no to war,” but often the only sound was the steady thwack of police helicopters overhead or the hum of police boats patrolling the shores of the Moscow River.

While the killing of Nemtsov has shaken the Russian opposition, which sees the Kremlin as responsible, it is unclear whether his death will be enough to invigorate the beleaguered movement. Despite the Ukraine conflict and Russia’s economic crisis, support for President Vladimir Putin has been above 80 percent in the past year.

Since mass anti-Putin protests brought hundreds of thousands to the streets of Moscow in 2011 and 2012, Putin has marginalized and intimidated his political opponents, jailing some, driving others into exile, and ramping up fines and potential jail time for those detained at protests.

The 55-year-old Nemtsov was among the few prominent opposition figures who refused to be cowed. But while many at the march expressed respect for his long political career and grief at his loss, few believed that his death would spark major change in Russia because of the Kremlin’s control over national media, where a vast majority of Russians get their news.

The Kremlin had identified Nemtsov as among the leaders of a “fifth column,” painting him and other opposition figures as traitors in the service of a hostile West.

About 30,000 people attended the march, making it the largest opposition rally in more than a year. The demonstrators bore Russian flags and signs that read “I am not afraid” or “Propaganda kills.”

Nemtsov was gunned down shortly before midnight Friday as he walked across a bridge near the Kremlin. The killing came just hours after a radio interview in which he denounced Putin’s “mad, aggressive policy” in Ukraine.

At the time of his death, Nemtsov was working on a report that he believed proved that Russian troops were fighting alongside the separatists in Ukraine, despite the official denials.

No one has been arrested in the killing. Investigators said they were looking into several possible motives and have offered 3 million rubles (nearly $50,000) for information about the shooting.