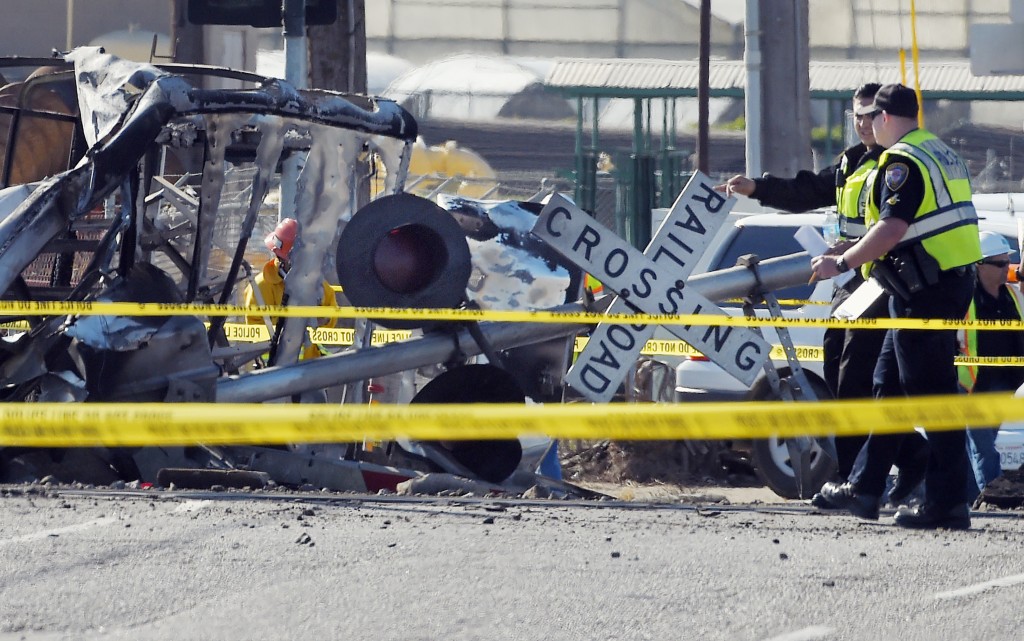 Nearly a decade ago, the U.S. Secretary of Transportation stood at the site of a horrendous commuter-train crash near downtown Los Angeles and called for the adoption of a new train-car design that testing showed could blunt the tremendous force of a head-on collision.

On Tuesday, that investment appeared to have paid off when a Metrolink train smashed into an abandoned truck in a crash remarkably similar to the 2005 wreck.

This time, three of the four double-decker passenger cars had the technology. Of the 50 people on board, only eight were admitted to hospitals, even though the impact at an estimated 55 mph was violent enough to fling several of the cars onto their sides. No one died.

“Safe to say it would have been much worse without it,” Metrolink spokesman Jeff Lustgarten said of how the technology performed during the crash in Oxnard, about 65 miles northwest of Los Angeles.

Yet the technology is not widely used in the United States. And while federal regulators have for years weighed rules that might require it, they have not formally proposed such measures.

Aside from Metrolink, crash energy management equipment is used by Amtrak, including on its Acela line in the Northeast, and two systems in Texas, according to the Federal Railroad Administration.

Such systems can vary in design, but the general idea is to disperse the energy of a crash away from where the passengers sit. Metrolink’s cars have collapsible “crush zones” at the ends of its cars that help absorb the impact, along with shock absorbers, bumpers and couplers.

It is the same principle at work in the “crumple zones” in newer cars. They are designed to absorb the force of a crash while keeping people inside safe.

One obstacle to more-widespread use of the train technology is that it has to be designed into new passenger cars, and railroads that bought cars without it in recent years might not want to invest in new ones so soon. Railroads can’t simply retrofit existing cars.

“It is not a bolt-on device,” said Martin Schroeder, chief technology officer for the American Public Transportation Association. He has been working with the Federal Railroad Administration as it considers whether to propose rules for the systems.

The advisory committee on which he sat finished its work in 2010. The Federal Railroad Administration would not comment Wednesday on the status of possible regulations.

Meanwhile, federal investigators looking into the Southern California wreck focused on the man who drove his pickup truck onto the tracks, then abandoned it as the train approached before dawn. Jose Alejandro Sanchez-Ramirez, 54, was arrested on charges of leaving the scene of an accident.

An attorney for Ramirez said that the pickup got stuck and that Ramirez did “all he could” to try to free it, then ran for help. But National Transportation Safety Board member Robert Sumwalt said late Tuesday that the truck was not stuck. He also noted that its emergency brake was on.

Metrolink began investing in new cars with the technology soon after the 2005 crash between a train and an SUV in Glendale. In 2010, the first of those cars rolled into use. By June 2013, the system had 137 of the cars – about two-thirds of its fleet – bought for $263 million from South Korea’s Hyundai Rotem Inc., Metrolink spokesman Scott Johnson said.

There are already signs that this week’s Metrolink crash may speed the adoption of the technology in the U.S.

A spokesman for Metro-North, the New York City commuter railroad that had a number of crashes recently, including a fiery collision between an SUV and a train Feb. 3 that killed six people, said that its passenger cars meet federal design standards but do not include crash energy management systems.

Experts said it was not clear whether the technology would have made a difference in the most recent Metro-North crash, in which more than 400 feet of electrified third rail snapped into a dozen sections and speared the train.

Still, the Southern California accident will prompt Metro-North “to assess whether the system could be beneficial in enhancing safety,” spokesman Aaron Donovan said in a statement.