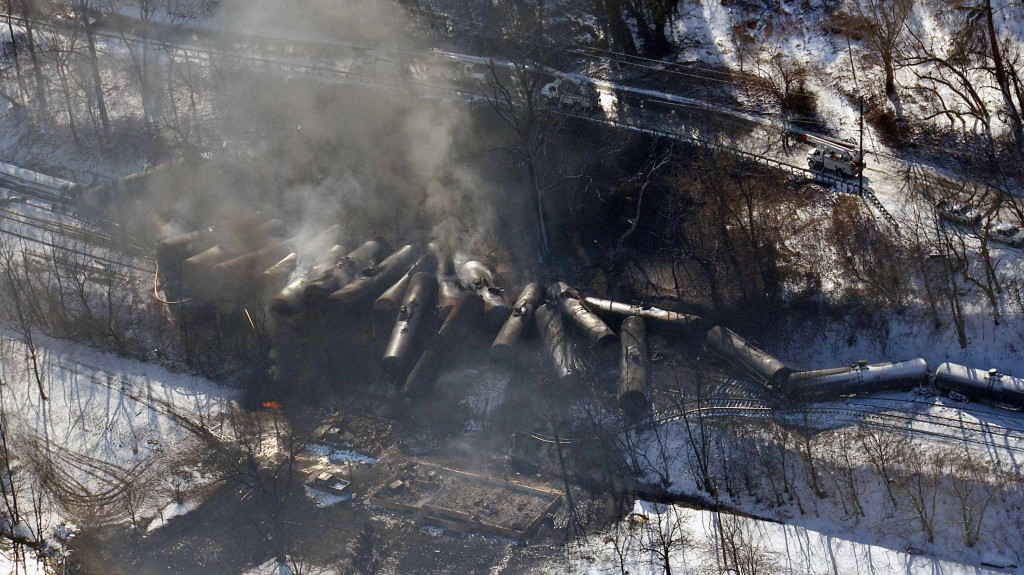 The federal government predicts that trains hauling crude oil or ethanol will derail an average of 10 times a year over the next two decades, causing more than $4 billion in damage and possibly killing hundreds of people if an accident happens in a densely populated part of the U.S.

The projection comes from a previously unreported analysis by the Department of Transportation that reviewed the risks of moving vast quantities of both fuels across the nation and through major cities. The study completed last July took on new relevance after a train loaded with crude derailed in West Virginia last Monday, sparked a spectacular fire and forced the evacuation of hundreds of families.

The accident was the latest in a spate of fiery derailments, and senior federal officials said it drives home the need for stronger tank cars, more effective braking systems and other safety improvements.

“This underscores why we need to move as quickly as possible getting these regulations in place,” said Tim Butters, acting administrator for the Transportation Department’s Pipeline and Hazardous Materials Safety Administration.

The volume of flammable liquids transported by rail has risen dramatically over the last decade, driven mostly by the shale-oil boom in North Dakota and Montana. This year, rails are expected to move nearly 900,000 car loads of oil and ethanol in tankers. Each can hold 30,000 gallons of fuel.

Based on past accident trends, anticipated shipping volumes and known ethanol and crude rail routes, the analysis predicted about 15 derailments in 2015, declining to about five a year by 2034.

The 207 total derailments over the two-decade period would cause $4.5 billion in damage, according to the analysis, which predicts 10 “higher consequence events” causing more extensive damage and potential fatalities.

If just one of those more-severe accidents occurred in a high-population area, it could kill more than 200 people and cause roughly $6 billion in damage.

“Such an event is unlikely, but such damages could occur when a substantial number of people are harmed or a particularly vulnerable environmental area is affected,” the analysis concluded.

The two fuels travel through communities with an average population density of 283 people per square kilometer, according to the federal analysis. That means about 16 million Americans live within a half-kilometer of one of the lines.

Such proximity is equivalent to the zone of destruction left by a July 2013 oil-train explosion that killed 47 people and leveled much of downtown Lac-Megantic, Quebec, the analysis said.

Damage at Lac-Megantic has been estimated at $1.2 billion or higher.

A spokesman for the Association of American Railroads said the group was aware of the Department of Transportation analysis but had no comment on its derailment projections.

“Our focus is to continue looking at ways to enhance the safe movement of rail transportation,” AAR spokesman Ed Greenberg said.

Both the railroad group and the Railway Supply Institute, which represents tank-car owners and manufacturers, said federal officials had inflated damage estimates and exaggerated risk by assuming an accident even worse than Lac-Megantic, which was already an outlier because it involved a runaway train traveling 65 mph, far faster than others that had accidents.

To get to refineries on the East and West coasts and the Gulf of Mexico, oil shipments travel through more than 400 counties, including major metropolitan areas such as Philadelphia, Seattle, Chicago, Newark and dozens of other cities, according to routing information obtained by The Associated Press through public-record requests filed with more than two dozen states.

Since 2006, the U.S. and Canada have seen at least 21 oil-train accidents and 33 ethanol-train accidents involving a fire, derailment or significant amount of fuel spilled, according to federal accident records reviewed by the AP.

At least nine of the trains, including the CSX train that derailed last week in West Virginia, were hauling oil from the Northern Plains’ Bakken region that is known for being highly volatile. Of those, seven resulted in fires.

Both the West Virginia accident and a Jan. 14 oil-train derailment and fire in Ontario involved recently built tank cars that were supposed to be an improvement to a decades-old model in wide use that has proven susceptible to spills, fires and explosions.

Safety officials are pushing to make the tanker-car fleet even stronger and confronting opposition from energy companies and other tank-car owners.

Industry representatives say it could take a decade to retrofit and modify more than 50,000 tank cars, not the three years anticipated by federal officials, who assumed many cars would be put to new use hauling less-volatile Canadian tar-sands oil.

The rail industry’s overall safety record steadily improved over the past decade, dropping from more than 3,000 accidents annually to fewer than 2,000 in 2013, the most recent year available, according to the Federal Railroad Administration.

But the historical record masks a spike in crude and ethanol accidents over the same time frame. Federal officials also say the sheer volume of ethanol and crude that is being transported – often in trains more than a mile long – sets the two fuels apart.

Most of the proposed rules that regulators are expected to release this spring are designed to prevent a spill, rupture or other failure during a derailment. But they will not affect the likelihood of a crash, said Allan Zarembski, who leads the railroad engineering and safety program at the University of Delaware.

Derailments can happen in many ways. A rail can break underneath a train. An axle can fail. A vehicle can block a crossing. Having a better tank car will not change that, but it should reduce the odds of a tank car leaking or rupturing, he said.

Railroads last year voluntarily agreed to reduce oil-train speeds to 40 mph in urban areas. Regulators said they are considering lowering the speed limit to 30 mph for trains not equipped with advanced braking systems. Oil and rail industries say it could cost $21 billion to develop and install the brakes, with minimal benefits.