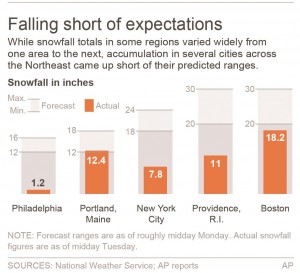 Boston bounced back quickly Wednesday from the Blizzard of 2015, with subways, buses and trains up and running again the morning after the storm buried a swath of New England in two to three feet of snow.

Many businesses reopened, as did Logan Airport, and homeowners, motorists and storekeepers dug out with grudging praise for the forecasters, who missed the mark in New York but got it right in New England.

Chris Laudani, a Boston resident, became an instant symbol of the city’s resilience for shoveling snow off the yellow and blue Boston Marathon finish line on Boylston Street, where the 2013 terrorist bombing killed three people and wounded more than 260.

Meteorologists had warned that Boston would get more than two feet of snow by Tuesday night, and the National Weather Service said the city ended up with 24.4 inches, the sixth-highest total on record. Other areas received around two to three feet, pretty much as predicted.

Boston is accustomed to big snowstorms, and with ample warning that a blizzard was coming, officials mobilized thousands of snowplows and called up the National Guard.

Around Massachusetts, Worcester got 33.5 inches — the highest amount recorded since 1905 — and Auburn and Lunenburg each reported 36 inches.

Parts of the New Hampshire coastline got 31 inches. Providence, Rhode Island, received around 19 inches. Thirty-one inches piled up in Sanford, Maine, and 33.5 inches in Thompson, Connecticut. Orient, on the eastern end of New York’s Long Island, got about 30 inches.

This article appeared in print on page 3 of the January 29th, 2015 edition of Hamodia.