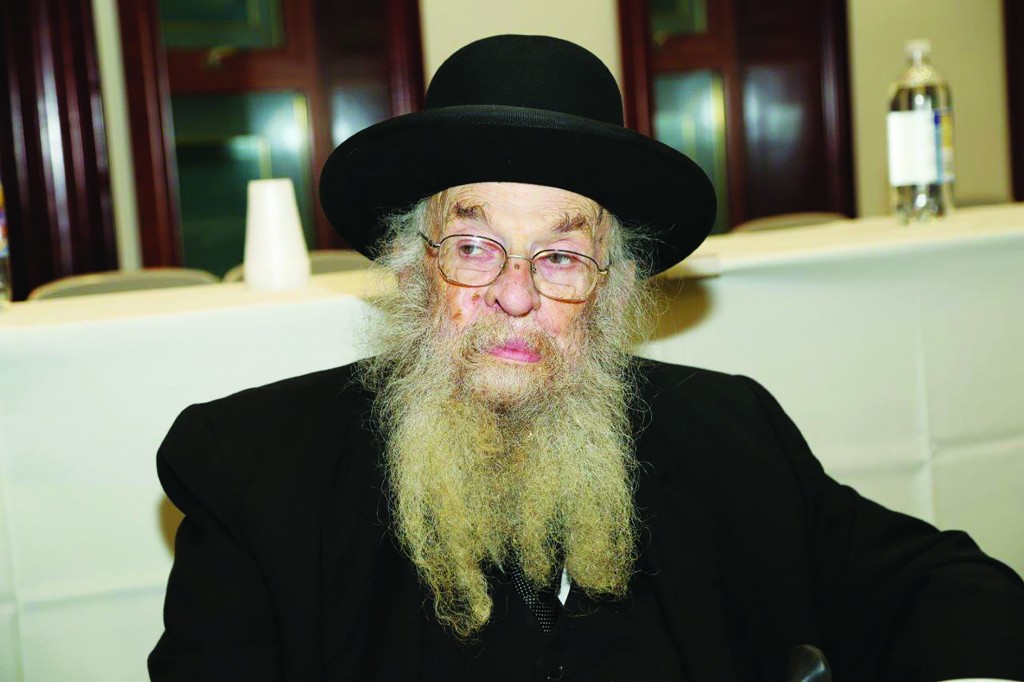 Thousands gathered at Yeshivas Zichron Meilech in Boro Park Wednesday morning to bid a tearful farewell to one of the elder Roshei Yeshivah of the Torah world, Hagaon Harav Chaim Leib Epstein, zt”l, one of the prized students of Hagaon Harav Aharon Kotler, zt”l, rebbi to countless talmidim, and a foremost leader among Gedolei Yisrael.

The masses in attendance quickly filled the yeshivah’s beis medrash on Dahill Road in Boro Park, with hundreds more listening to hespeidim on speakers outside, on what was a particularly cold and dreary morning.

The Palace, a hall one block away, provided a ook-up and was filled with thousands of mourners.

“Someone who demonstrated and demanded what it means to live a life of Torah has been taken from us,” said Harav Yaakov Perlow, Novominsker Rebbe, shlita. “His words and his essence demanded of individuals and of the tzibbur high standards to live up to. Hashem should help that this great Yid should stay in our memories and in our ideals.”

The many hespeidim lasted for nearly four hours. Each speaker tearfully and in a cracked voice mourned the loss of a Rosh Yeshivah who served as a connection, carrying the Torah between generations.

“He was a bridge from the generation that was, to the one that was going to be,” said Rabbi Yitzchok Finkel, formerly of Yeshivas Torah Temimah and a brother-in-law of Harav Epstein. “He saw the Roshei Yeshivah and Gedolim who had existed previously and gave over to the yeshivos of today the ruach and Torah of the world that was.”

Besides his greatness in Torah, both as a scholar and educator par excellence, many speakers spoke of the profound influence that his mussar discourses had on generations of talmidim.

“His shmuessen were spoken from the heart and were directed at every individual talmid. Over the years there were all types of talmidim in the yeshivah, but he was able to relate to and inspire all of them,” said Rabbi Tzvi Hirsch Basch of Yeshivas Zichron Meilech. “He has a tremendous power to affect people through the great sincerity with which he spoke and with his dedication to truth. His very appearance and essence obligated everybody to strive for higher levels. He had a passion for Yiddishkeit and for kedushah. Zichron Meilech is a small corner of the world, but it is a pure corner.”

Harav Yaakov Bender, Rosh Yeshivah of Yeshivas Darchei Torah of Far Rockaway, a nephew of the niftar, gave a glimpse into the multi-faceted greatness that Harav Epstein embodied. He spoke emotionally of how, when he was orphaned at a young age, it was his uncle, the extolled Rosh Yeshivah, who stepped in to care for his bereft family members.

“He led the house for us; it was all Reb Chaim. His whole essence and all that he taught us was Torah,” said Harav Bender, with particular emotion. “The way he conducted himself was such an example. He advised people on everything — chinuch, shalom bayis — everything.”

Many speakers stressed the shleimus, perfect balance of characteristics, which Harav Epstein personified. Rabbi Aharon Dov Epstein, a son of the niftar, spoke of his father’s capacity to feel the pain of others.

“I was walking back from the Yeshivah of South Fallsburg on a Shabbos in the summer with my father when a Hatzolah ambulance drove by with its siren on. My father stopped walking and just stood there,” he said, choking back sobs. “Eventually, I asked him, ‘Tatte, what’s wrong, why aren’t you moving?’ He answered, ‘There’s someone who’s sick and in danger and we should just go eat cholent?’”

The huge crowd escorted the aron for a number of blocks before the levayah continued to Lakewood for hespeidim in Beth Medrash Govoha, where Harav Epstein studied for so many years under his beloved rebbi, Hagaon Harav Aharon Kotler, zt”l.