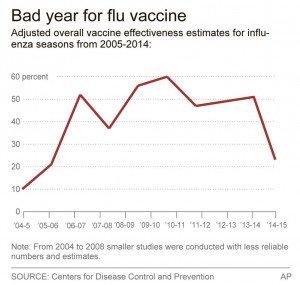 As predicted, this year’s flu vaccine is doing a pretty crummy job. It’s only 23 percent effective, primarily because it doesn’t include the bug that is making most people sick, according to a government study released Thursday.

That’s one of the worst performances in the last decade, since U.S. health officials started routinely tracking how well vaccines work. In the best flu seasons, the vaccines were 50 to 60 percent effective.

“This is an uncommon year,” said Dr. Alicia Fry, a flu vaccine expert at the Atlanta-based Centers for Disease Control and Prevention, who was involved in the study.

The findings are not surprising. In early December, CDC officials warned the vaccine probably wouldn’t work very well because it isn’t well matched to a strain that’s been spreading widely.

Each year, the flu vaccine is reformulated, based on experts’ best guess at which three or four strains will be the biggest problem.

But this year’s formula didn’t include the strain of H3N2 virus that ended up causing about two-thirds of the illnesses this winter. And that strain tends to cause more hospitalizations and deaths, particularly in the elderly, making this a particularly bad winter to have a problem with the flu vaccine.

This article appeared in print on page 3 of the January 16th, 2015 edition of Hamodia.