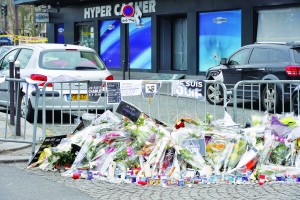 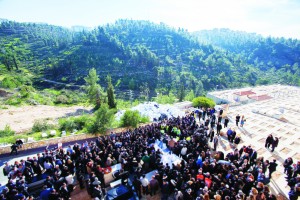 The four Kedoshim murdered last Friday in a kosher supermarket in Paris were brought to their final resting place Tuesday afternoon on Har Hamenuchos in Yerushalayim.

The levayah was broadcast live on all Israeli media, making it a nationwide expression of mourning and solidarity.

The Kedoshim were brought to the Kiseh Rahamim Yeshiva in Bnei Brak early in the morning where Rabbi Meir Mazuz, the spiritual leader of the Tunisian community in Israel and the Rosh Yeshivah, delivered a hesped. Yoav Hattab and his family are of Tunisian origin and the family requested that the levayah first stop in Bnei Brak.

Rabbi Mazuz called the terrorists “the lowest of the low … but the holy men did not die in vain … They will pray for the entire people of Israel and let the whole world know there is nowhere [else] in the world that is a refuge for the people of Israel. Terror strikes America, England, Ukraine and now France. There’s no safe place in the world. Had they stopped the terrorism in time we wouldn’t have come to this. This week they finally remembered to hold a rally. Everyone needs to unite and come to the land of Israel.”

At Har Hamenuchos, after tearing kriah and reciting Kaddish, representatives of each of the mourning families lit a torch and said a few words. “My father was in love with Israel,” said Yonatan Saada, the son of François Michel. “He really wanted to live here, and he will. I’m sure he’s really happy to be here with you.”

The wife of Phillipe Braham spoke movingly about what it meant to her to feel that she was not alone in her grieving, but part of a nation sharing in her pain. “I’m crying, but I know that you are all crying with me and I’m grateful to all of you for that,” she said, adding, “Phillipe, watch over me, over Naor, over Elad.”

The father of Yoav Hattab, Harav Binyamin Hattab, had just one message to deliver: “I lovingly accept the judgment from Shamayim.”

The uncle of Yohan Cohen, who worked at the supermarket and saved a three-year-old boy from the terrorists, recalled the 22-year-old’s courage. “When he faced terror head-on, he didn’t hesitate to demonstrate courage and protect the lives of his colleagues and customers,” he said. He expressed gratitude to the governments of France and Israel for making it possible “to bury our holy angel in Eretz Hakodesh.”

President Rivlin opened his remarks by saying, “This isn’t the way we wanted to welcome you to … Israel. … I stand before you with a broken heart, and with me is an entire nation that is crying with you.”

Regarding the brutal murders in Paris, the president stressed that the terrorists had specifically targeted Jews, in a Jewish neighborhood, making their Shabbos purchases on a Friday. “What’s more Jewish than shopping for Shabbos?” he asked.

He noted that François Michel Saada had purchased an apartment, but never had the chance to affix the mezuzah. Citing parashas mashuach milchamah, that a person who built a home but did not live in it isn’t sent to war, Rivlin said that in Phillipe’s case, “the war came to him.”

Speaking directly to the niftar, 21-year-old Yoav Hattab, the president said: “Yoav, two weeks ago you came to Yerushalayim for the first time and visited the Kosel. Today, you come here for the second and final time.”

Rivlin said the attack was “pure, venomous evil, which stirs the very worst of memories. This is sheer hatred of Jews … which seeks to strike, wherever there is Jewish life.

“It would be dangerous to deny that we are talking about anti-Semitism, whether old or new,” Rivlin added, calling on the leaders of Europe to act and “commit to firm measures to return a sense of security and safety to the Jews of Europe; in Toulouse, in Paris, in Brussels, or in Burgas.”

The leaders of Europe, he said, can no longer ignore or act with leniency against anti-Semitic incitement. “Ignorance and violence will not simply go away on their own,” Rivlin said.

Israeli Prime Minister Binyamin Netanyahu stressed that all of Am Yisrael was embracing the grieving families. “In the ground of Yerushalayim, four new graves have been dug [for] four people who were murdered only because they were Jews. The murderers aren’t just enemies of the Jewish people but of all humanity, and the time has come for cultured people to unite and uproot the enemies from our midst.”

France’s environment minister vowed to fight anti-Semitism, which she said “has no place in France,” and awarded each of the victims an Order of the Legion of Honor, the country’s highest civilian honor.

This article appeared in print on page 2 of the January 14th, 2015 edition of Hamodia.