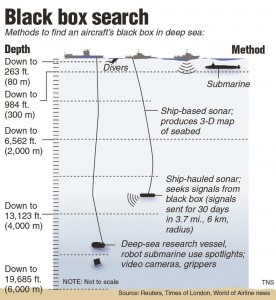 Bad weather forced divers trying to identify sunken wreckage from a crashed AirAsia passenger jet to abort their mission on Sunday and Indonesian officials said they had not yet picked up any signals from the lost plane’s “black box.”

Indonesia’s meteorological agency has said seasonal tropical storms probably contributed to last Sunday’s crash and the weather has persistently hampered efforts to recover bodies and find the cockpit voice and flight data recorders that may explain why the Airbus A320-200 plunged into the sea.

“Conditions did not allow diving operations,” the head of Indonesia’s search and rescue agency, Fransiskus Bambang Soelistyo, told a news conference in Jakarta. “Our priority is to dive in the location we suspect parts of the plane to be.”

Flight QZ8501 crashed into the Java Sea about 40 minutes after taking off last Sunday from Indonesia’s second-largest city Surabaya en route for Singapore. There were no survivors.

“Based on past experience, the black box is not far from the plane debris we have found,” Soelistyo said. But he added that none of the searching ships had detected any “pings,” the locator signals the black box should transmit after a crash.

Until investigators can examine the black box recorders, the cause of the crash remains a mystery, but the area is known for intense seasonal storms. BMKG, Indonesia’s meteorological agency, has said bad weather may have caused ice to form on the aircraft’s engines.

“The flight document provided by the BMKG office shows fairly worrying weather conditions for the aircraft at cruising level on the chosen route,” the agency said in a report.

This article appeared in print on page 3 of the January 5th, 2015 edition of Hamodia.