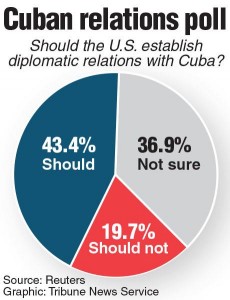 When Cuban and American leaders announced they would restore diplomatic relations after a standoff lasting more than a half-century, all eyes in the U.S. immediately turned to Miami, where many expected the country’s largest population of Cuban exiles to pour angrily into the streets.

Outrage was decidedly muted, however, with only a handful of demonstrations, while some of the expatriates known for their support of isolationist tactics actually expressed support for the changes.

The response to Wednesday’s surprise announcement by President Obama and Cuban President Castro was a reflection of how much the Cuban-American community has changed since the Cold War days, when the U.S. began trying to freeze out the island’s communist government.

Younger generations and recent arrivals from Cuba tend to be more open to exchange and dialogue. Older exiles whose relatives were killed or imprisoned after the 1959 revolution are less likely to approve of a thaw.

But there are exceptions at all ages: Cuban-born Raul Hernandez, 60, has lived in Miami for 35 years and has two brothers in Cuba. Travel restrictions kept him from seeing his parents before they died.

“I think the embargo has not been good for the Cuban people because the government never changed,” he said.

Then there’s Ahmed Martel, 43, a designer who is too young to remember the revolution but lived under the Castro government until he left the island in 1992.

Martel says he is opposed to the plan to strengthen ties with Cuba.

“Now we’re going to be friends and get dinner together…? No. You can’t erase history,” she said, waving a Cuban flag.

This article appeared in print on page 1 of the December 19th, 2014 edition of Hamodia.