Crown Heights Reacts to Attack in 770 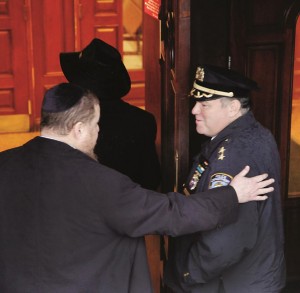 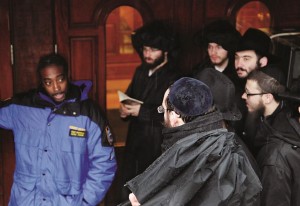 Tuesday morning, the Jewish community awoke to the frightful news that a bachur, Levi Rosenblatt, had been stabbed and seriously injured in Chabad’s world-famous headquarters, “770,” an abbreviated name based on its address, 770 Eastern Parkway.

“I’m not really afraid, but it is a major shock; there never has been such a thing in 770,” said a bachur from France, one of many who come from overseas to study in Crown Heights. Visibly exhausted and shaken, the bachur, who asked to be identified only as Shlomo, had been present at the time of the attack and said that he had not slept since then. “We have had a lot of news like this in France, but we did not expect it here.”

By Tuesday afternoon, the 770 complex, which had been partially shut by police after the incident — which took place at approximately 1:40 a.m. — until 11 a.m. while the investigation was underway, was its usual buzz of activity; filled with minyanim, young men learning, and Lubavitcher chassidim from near and far continually coming and going. The busy “life as usual” appearance was bizarrely juxtaposed against the flurry of news reporters from all streams of New York media and a steady flow of police and political officials who dotted the building’s already-crowded entranceway.

“The policeman was very apprehensive about dealing with the attacker, I guess because of all that has been going on with the police,” said Yisrael Aryeh Leib Engelberg, a bachur who is also from France, and who took the widely circulated video of the incident. “I did not sleep all night, and did not want the video to get out in the first place.”

Memories of the 1991 Crown Heights riots and recent nation-wide racial tensions over police incidents heightened the concerns of many, given that the knife-wielding assailant, who was black, was shot by a white police officer and later died of his wounds.

“The worry is that this will be the beginning of something unpleasant between us and the broader community,” said a Crown Heights resident in his late twenties. “No one minds or is afraid of peaceful protests, but we certainly don’t want rioting or looting here. The situation is not what it was 20 years ago here; things have only been improving. Hopefully it will be a one-time incident that will not repeat itself here or anywhere else. We all hope that the bachur will have a full recovery and that it will give us all a boost in Torah and mitzvos in a real and sincere way.”

While many local residents felt that the assailant’s obviously unbalanced mental state made it clear that this was not an indication of any greater pattern, others were more cautious.

“One extreme is to look at it as being an isolated incident, the other is to see it as premeditated, but I think the concern of many people is that it is a copy-cat crime from what occurred in Eretz Yisrael. If it is, then we are in a sad state of affairs, because the copy-cat syndrome can be very scary,” said Rabbi Shea Hecht, Chairman of the National Committee for the Furtherance of Jewish Education (NCFJE) and long-time community askan. “An additional issue is that no matter what the situation is, I’m not so sure that much can be done about it. Since Yankel Rosenbaum’s murder there has been a lot a work on relations between us and the broader community. The relationship between us and the blacks in Crown Heights is very good now. However, in terms of security, 770 is open 24 hours a day. It’s not just us coming in and out — people come to see 770 as tourists all the time, all different sorts of people. We have to be realistic. How much can really be done to prevent such things from happening?”

This article appeared in print on page 6-7 of the December 10th, 2014 edition of Hamodia.