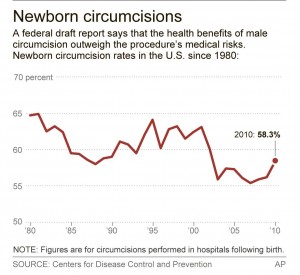 Ever since Avraham Avinu fulfilled a commandment of Hashem and circumcised himself at the age of 99, bris milah has been a sacred covenant between Hashem and us. Bris milah is a mitzvah so lofty that we cannot possibly grasp its holiness.

The only reason that a Jew ensures that milah is performed on his young son is in order to fulfill this great mitzvah and to join this bris, this holy covenant.

Regardless of the views and opinions of the CDC, we would continue, with the help of Hashem, to perform bris milah precisely the way our ancestors have safely performed it for more than 3,000 years.

But there are two reasons why the CDC guidelines are a positive development.

We live in a generation in which, tragically, the vast majority of Jews know virtually nothing about Yiddishkeit and have no inkling of what bris milah represents. So if the new CDC guidelines convince even a single wavering individual to agree to allow his son to have a bris, that alone is a tremendous achievement.

According to Rabbi Levi Heber of the International Bris Association, a Chabad-affiliated organization that performs numerous brisos for non-religious Jews, this report may be helpful in situations when the child is born to a Jewish mother and  non-Jewish father: It will encourage the father to allow a bris.

Each Jewish child is akin to an entire world. It is stated that Avraham Avinu personally intervenes to ensure that anyone who underwent a bris milah (provided he does not intermarry) merits a place in the World to Come.

At a time when milah is increasingly under attack in Europe and elsewhere around the globe, word of these CDC draft guidelines may strengthen the defenders of this fundamental mitzvah as they battle those who wish to deprive us of this most basic of religious liberties. While their attacks against other religious rituals prove that those who seek to ban or limit milah are motivated by a malice towards religion and not out of any supposed humanitarian concerns, this report may prove useful in efforts to counter some of their misleading propaganda.

However, Rabbi Heber is concerned that the recommendation for insurance companies to start paying for circumcisions may, ironically, cause some parents to  have the circumcision performed in the hospital in a manner that does not comply with halachah, instead of a having a kosher bris performed by a mohel.

We can only daven and hope that, in the end, these guidelines will bring about more halachic brisos.

This article appeared in print on page 8 of the December 3rd, 2014 edition of Hamodia.