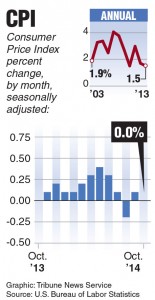 The Consumer Price Index was flat in October after rising just 0.1 percent the previous month.

For the 12 months ending Oct. 31, prices have risen 1.7 percent, below the Federal Reserve’s annual target of 2 percent.

But those increases were offset by a sharp drop in energy prices, particularly at the gas pump.

In late October, the average price for a gallon of regular unleaded fuel fell below $3 for the first time since 2010, according to AAA. Prices have continued to fall in November, as well.

The Fed uses a different inflation gauge, based on personal consumption expenditures, that has been running lower than the Consumer Price Index.

October’s data keep pressure low on Fed officials to start raising its benchmark short-term interest rate, which has been near zero percent since late 2008.

At their meeting last month, Fed policymakers expected falling energy prices to hold down inflation in the short term, according to minutes released Wednesday.

Some Fed officials expressed concern that inflation might keep running below the 2 percent annual target “for quite some time.”

This article appeared in print in the November 21st, 2014 edition of Hamodia.