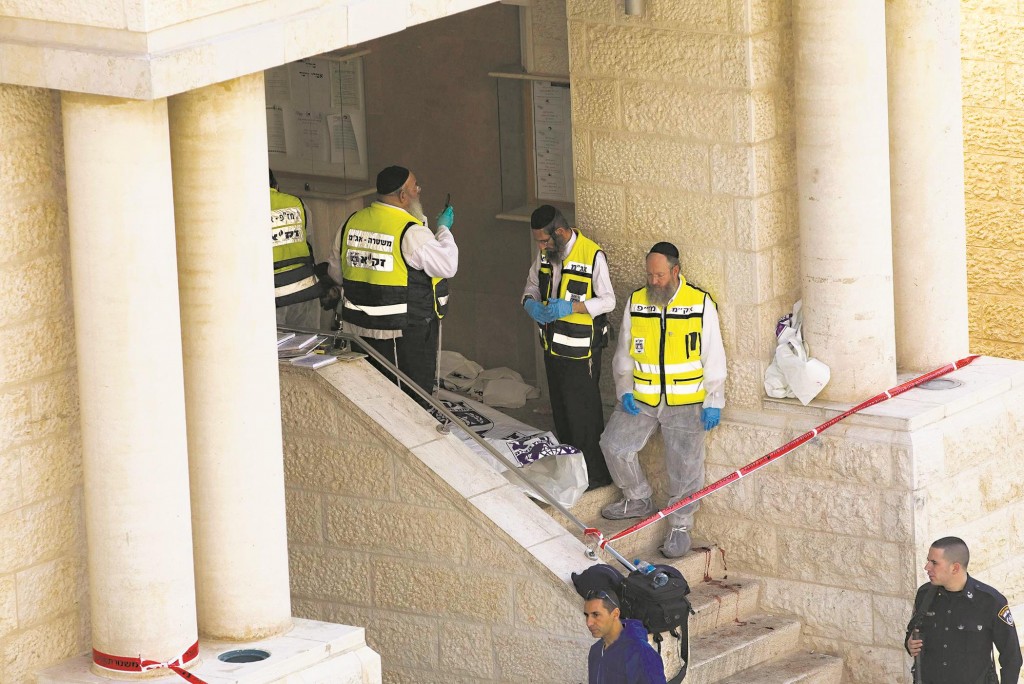 Was it an attack on a mosque? Were the Palestinians the real targets of the terrorists? Did four Jews just happen to die simultaneous to the Israeli police shooting of the two Palestinians? And do media organizations have a policy of showing pictures of dead Arabs but not dead Jews?

All these insinuations — and the usual more — were facetiously mixed in to the reportage starting in the early hours of Tuesday morning, as word of an unspeakable tragedy first began percolating. Four Jews lay in their blood on the floor of a Yerushalayim shul, still wrapped in their tallisos and tefillin, their lips stopped forever in middle of Krias Shema — and the Mediastan press were already churning on how to present the story in a supposedly post-racist world.

Some of their initial offerings were so egregious that CNN, battered by a ferocious barrage on Twitter, issued a rare apology for mistaken reporting.

Leading the list of what Honest Reporting terms the “top headline fails” is CNN’s ticker under an interview with Yerushalayim Mayor Nir Barkat, “Deadly Attack on Jerusalem Mosque.” That alternated with “Police Shot, Killed Two Palestinians.”

Most commenters chalked it up to, well, just CNN being CNN.

“Dear CNN: The Jewish people are victims of today’s attack. Not Palestinians, not a mosque. Get your facts straight,” said one user.

The ticker was quickly corrected and changed — but so was the “deadly attack” business.

“Four Israelis Die in Synagogue Attack,” was how the reframed CNN piece went.

CNN later apologized, saying that “our coverage did not immediately reflect the fact that the two Palestinians killed were the attackers. We erred and regret the mistake.”

The BBC also initially referred to the attack as on a mosque, but dissimilar to CNN, they never changed it from a “deadly attack” to something less. They didn’t have to.

“Incident at a Jerusalem Mosque,” was how the BBC called it. An incident, no less. The British have an absorbing and colorful language.

Over at the BBC’s print cousin, the Guardian’s editorial vacillations were evident. They ran a Reuters dispatch, which was originally headlined “Palestinians Kill Four in Jerusalem Synagogue Attack” and led with the sentence: “Two Palestinians armed with a meat cleaver and a gun killed four people in a Jerusalem synagogue on Tuesday before being shot dead by police…”

However the Guardian changed their headline to “Four Worshippers Killed in Attack on Jerusalem Synagogue” and in their lead they also excised any reference to Palestinians, publishing: “Two men armed with axes, knives and a pistol have killed four Israelis and wounded several others in a Jerusalem synagogue…”

What all this proves is not that the media cannot handle an attack with raw anti-Semitic overtones — that has always been known. The lesson is that the mainstream press’s bias is evident in a story we are all intimately familiar with. That bias is probably embedded in the stories we know nothing about as well.

The culprits and their scoops should be ignored, not copy/pasted and forwarded.