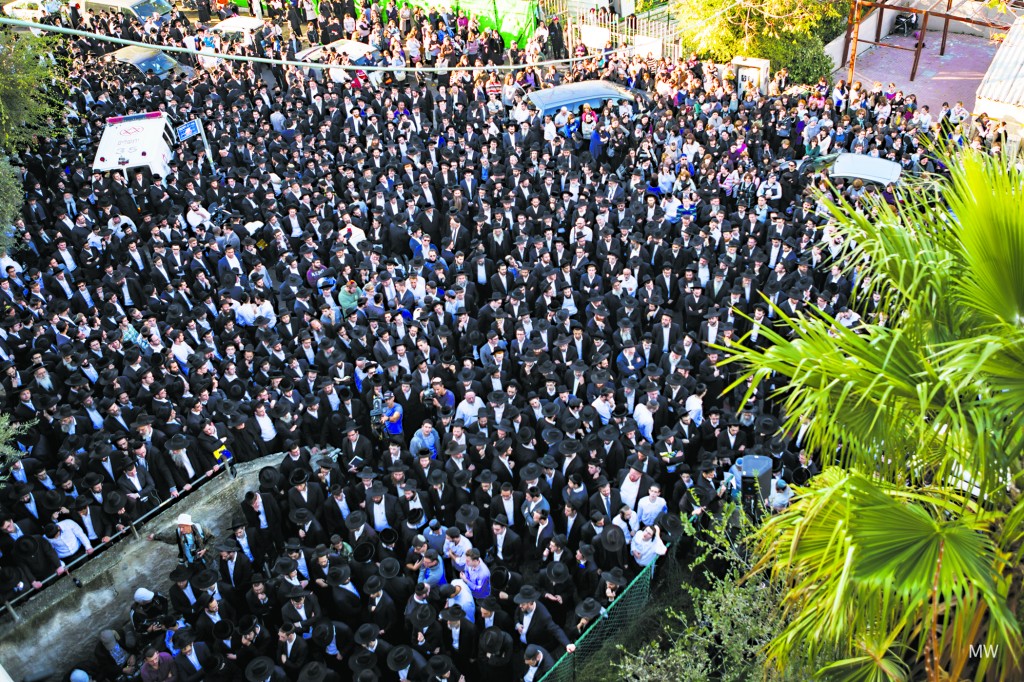 In the hours immediately following the massacre in Har Nof, Hamodia reached out in Eretz Yisrael, the United States and Britain to those who knew the victims so they could share some facts and memories with us.

Rabbi Goldberg, a British-born Rabbi, was originally from Liverpool. He studied for many years in the Gateshead Yeshivah and held a doctorate in chemistry.

While studying as a member of the Gateshead Kollel, he supported his family by operating a consulting business at night, utilizing his expertise in chemical powders.

He was a resident of Golders Green in London and worked in publishing before moving to Eretz Yisrael in 1993.

“He was the most wonderful person you could meet, a pillar of the community,” said David Osborne, a close friend. Rabbi Goldberg davened at Kehillas Bnei Torah most days for the last 10 years or so, he said.

“All he wanted was to live a peaceful life. His family are the nicest people you could meet. They had lots of children and several grandchildren.”

Yossi G. recalled for Hamodia: “I used to work in a bookstore for several years, where he was a regular customer and bought many sefarim. He always paid on time, always had a vort. He was one of the warmest people I’ve ever known, such a pleasant person. He always asked, ‘How are you? How’s the family?’”

“When I heard the news it just knocked me out,” Yossi said.

Friends recalled Rabbi Goldberg as the personification of a lev tov, a good and giving heart, loved by all.

“I remember when he first came to Camp Agudah in England to be a madrich [counselor],” recalled a long-time friend. “He came on Thursday. By Motzoei Shabbos there was nobody in the whole camp who was not his friend.”

Michelle Hirschfield, cousin of Rabbi Goldberg, told the BBC that he was murdered simply because he was Jewish. She added: “I remember his big smile. I remember his love of life, his concern for people, for his own family, greater family, and for the world at large. And it’s a very sad loss.”

Rabbi Avraham Shmuel Goldberg was buried in the Givat Shaul cemetery in Yerushalayim. He is survived by his wife, six children and grandchildren, ybl”c.

Rabbi Aryeh Kupinsky immigrated to Eretz Yisrael from the United States and worked in computers and as a mashgiach in a bakery. He had studied at the Yerushalyim yeshivah of Harav Tzvi Kushalevsky. Rabbi Kupinsky davened regularly at Kehillas Bnei Torah in Har Nof, where he was killed. He was known to never refuse anyone seeking assistance in any form, always looking for ways to help others.

“He was a tremendous baal chessed,” said Dovid Solomon, a fellow mispallel at Bnei Torah. “If anybody made a simchah, he was there to help, whether they had asked him to or not.”

Neighbors described Rabbi Kupinsky as a man of tremendous physical strength, with an even bigger heart.

“He cleaned out all of the shtenders in the beis medrash every Motzoei Shabbos,” said Mr. Solomon. “Before Yom Tov he would help move all of the furniture and sefarim around. He did all kinds of things that nobody knew about and that nobody thanked him for, but he never complained.”

An exceptionally dedicated family man, Rabbi Kupinsky once remarked, “When I say the words Avinu Malkeinu,I am overcome by emotion to think of how Hashem feels about us as His children.”

Friends said that he always carried himself with simplicity, had no airs about him, and was above politics.

Rabbi Aryeh Kupinsky was buried in the Givat Shaul cemetery in Yerushalayim. He is survived by his wife and five children, aged five to 16, ybl”c. His daughter Chaya Chana, a”h, tragically died two years ago in her sleep at the age of 13.

Rabbi Levine was born in the United States and immigrated to Eretz Yisrael after his marriage. He devoted himself to study, both at the Lev Avraham kollel in Mea Shearim and the evening kollel at Kehillas Bnei Torah, where he was murdered by terrorists on Tuesday.

Rabbi Levine was particularly remembered for his lengthy tefillos and tremendous dedication to Torah study.

“He was always the last one davening. He would get up at sunrise and go to bed at two in the morning. He hardly slept and always had a sefer in his hand.”

Friends recalled him as a quiet and unassuming person, who carried himself cheerfully and greeted everyone with a smile.

Rabbi Yerachmiel Levine, son of Rabbi Kalman Levine, eulogized his late father: “My father would study all day long and would return home at night only to learn some more until he would fall asleep in his chair. Abba, you were in the middle of saying the Shema when your soul left your body; the terrorists came and murdered you.”

Rabbi Kalman Levine was buried in the Givat Shaul cemetery in Yerushalayim. He is survived by his wife, nine children and five grandchildren, ybl”c.

Harav Moshe Twersky, a native of Boston, immigrated to Eretz Yisrael with his family in 1990 to serve as a maggid shiur at Yeshivas Toras Moshe in Yerushalayim. He lived next door to the Kehillas Bnei Torah shul where the attack took place and davened there regularly.

He was the elder son of Rabbi Isadore Twersky of Boston, founder of Harvard’s Center for Jewish Studies, and a grandson of Rabbi Joseph B. Soloveitchik.

Harav Twersky was a phenomenal talmid chacham with encyclopedic knowledge of Shas and its commentaries.

“When someone asked him a question that had to do with another source, he would stop and you could see his eyes go back and forth as he reviewed it by memory,” recalled a former talmid. “I remember when someone asked him a kushya in meseches Erechin. He said that ‘when I was 11 years old I asked my grandfather [Harav Soloveitchik] the same kushya, and he bought me an ice cream — maybe I should buy you an ice cream.’”

Students described him as an exceptionally reserved person who showed tremendous caring for talmidim. When one student’s parents didn’t want him to stay in yeshivah, Harav Twersky organized a minyan to say the whole sefer Tehillim at the Kosel at chatzos.

“When I was in the hospital with meningitis, he came to visit me. He brought drinks and danishes,” recalled the former talmid. “Then he read my chart and told me everything that was going on and what to expect. He was brilliant, and I really felt that he loved me.”

Harav Twersky was also a close student of Harav Elya Weintraub, zt”l, and, in addition to his greatness as a lamdan, had extensive knowledge of pnemius haTorah.

Not letting his genius or status prevent him from seeking any opportunity for growth, Harav Twersky used to walk into central Yerushalayim to hear the shalosh seudos Torah of Harav Tzvi Mayer Zilberger.

“He was a real kadosh,” related the talmid. “You got the impression that he was a truly holy person. Everybody in yeshivah called him ‘the Rebbe’ — only partly as a joke — because technically he was the Tolna Rebbe, but also out of awe.”

Zisha Noveseller of Lakewood was a chavrusa of Harav Twersky when they were both in their early twenties. “He had a gigantic mind, but what stood out above everything was his yiras Shamayim that was apparent in everything that he did.

“Despite his own brilliance and his status as a descendant of two of the greatest dynasties in Klal Yisrael, he was very soft-spoken and modest. “He was a yedid of Yidden from every camp,” he concluded.

Harav Twersky was buried in the Givat Shaul cemetery. He is survived by his wife, Miriam, and five children, three sons and two daughters, aged 23-33, and 10, ybl”c.