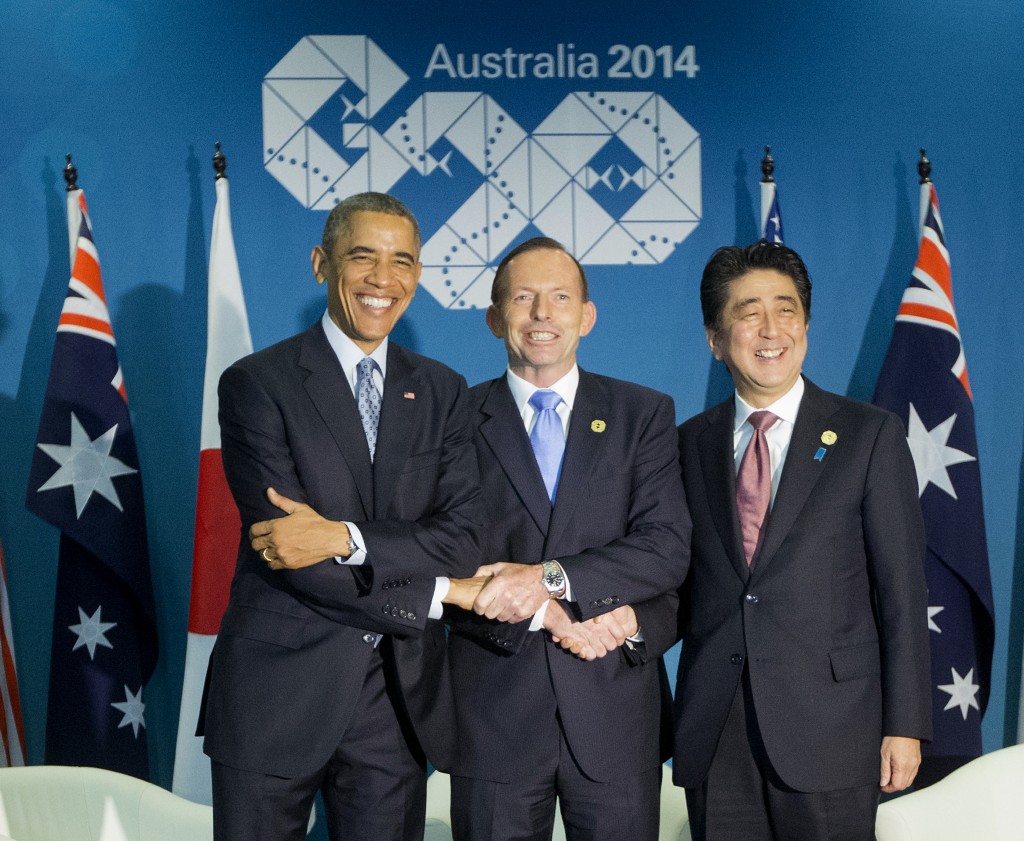 Under pressure to jolt the lethargic world economy back to life, leaders of G-20 nations on Sunday finalized a plan to boost global GDP by more than $2 trillion over five years. The fanfare, however, was overshadowed by tensions between Russian President Vladimir Putin and Western leaders.

The communique from the Brisbane summit of Group of 20 wealthy and emerging nations revealed that the plan for jumpstarting growth includes investing in infrastructure, increasing trade and the creation of a global infrastructure hub that would help match potential investors with projects.

Leaders also aim to reduce the gap between male and female participation in the workforce by 25 percent by 2025, saying that would put 100 million more women in employment and reduce poverty.

Speaking at the end of the summit, Australian Prime Minister Tony Abbott said countries will hold each other to account by monitoring implementation of their commitments to boost growth.

The G-20, criticized in recent years as being all talk and no action, was urged to deliver measurable results this year. Perhaps in response, the group said the International Monetary Fund and OECD will also play a role in monitoring progress and estimating the economic benefits of the growth plan.

“We’ll make sure they keep their feet to the fire,” she said.

The G-20 communique says if the $2 trillion initiative is fully implemented, it will lift global GDP by 2.1 percent above expected levels by 2018 and create millions of jobs.

Abbott said countries agreed on more than 800 new measures to spur the global economy, which the IMF describes as facing a “new mediocre.”

“People right around the world are going to be better off,” he said.

But the G-20, which represents around 85 percent of the global economy, faces an uphill struggle to implement its plan after international agencies downgraded their global growth forecasts in recent months. Growth in China and Japan has weakened, and Europe is teetering on the brink of another recession.

And experts warned that the countries would need to comply with every one of the 800 measures to achieve the 2.1 percent target, a virtually impossible task given the difficulties they will inevitably face in pushing some of the policies through in their home countries.

“There are two questions: whether the specifics are credible and whether the political backing by leaders is convincing,” said Thomas Bernes, an analyst with the Center for International Governance Innovation, a Canadian-based think tank.

Abbott said the group had been most productive on the issue of trade, calling it the “key driver of growth.” The leaders adopted reforms to streamline customs procedures and reduce regulatory burdens.

Despite Australia’s push to keep the summit focused on the economy, the meeting was largely overshadowed by tensions between Putin and Western leaders over the escalating conflict in Ukraine, where Moscow is supporting pro-Russian rebels in the country’s east.

Putin was the first leader to depart Australia, leaving before the communique was issued. He told reporters he left ahead of a final leaders’ lunch because he wanted to rest before returning to work.

Abbott has been particularly strong-worded in his criticism of Russia since a Malaysia Airlines plane was shot down in July over a part of eastern Ukraine controlled by Russian-backed separatists, killing all 298 on board. Australia lost 38 citizens and residents in the MH 17 disaster.

Abbott said he and Putin had engaged in a “very robust” discussion about the situation in Ukraine.

“I utterly deplore what seems to be happening in eastern Ukraine,” Abbott said. “I demand that Russia fully cooperate with the investigation, the criminal investigation of the downing of MH17, one of the most terrible atrocities of recent times.”

The G-20 also tackled the tricky issue of tax evasion by multinationals, declaring that profits should be taxed in the country where they are earned. There has been an ongoing effort by governments to crack down on the practice of big companies such as Google and Amazon moving profits earned in one country to others with lower tax rates.

The G-20 endorsed a common reporting standard for the automatic exchange of tax information, which will begin by 2017 or 2018.

Rights groups’ reactions to the communique were relatively positive. Oxfam said it was happy the leaders tackled tax evasion, but called for a global tax summit where all countries would have a say in deciding fair tax rules.

Tim Costello, chair of the Civil Society 20 group, or C-20, was relieved the communique specified that the beneficiaries of the additional growth would include the poor.

“We’ve taken a few small steps forward,” he said. “Inclusive growth, which really requires the benefits to flow to jobs and to the poor and to women, is in the text, rather than flowing to profits and the top 5 percent.”

Thousands took part in more than two dozen protests throughout the weekend, but only a handful of arrests were reported. Tensions briefly flared on Sunday when Aboriginal rights activists burned an Australian flag, but police didn’t intervene.