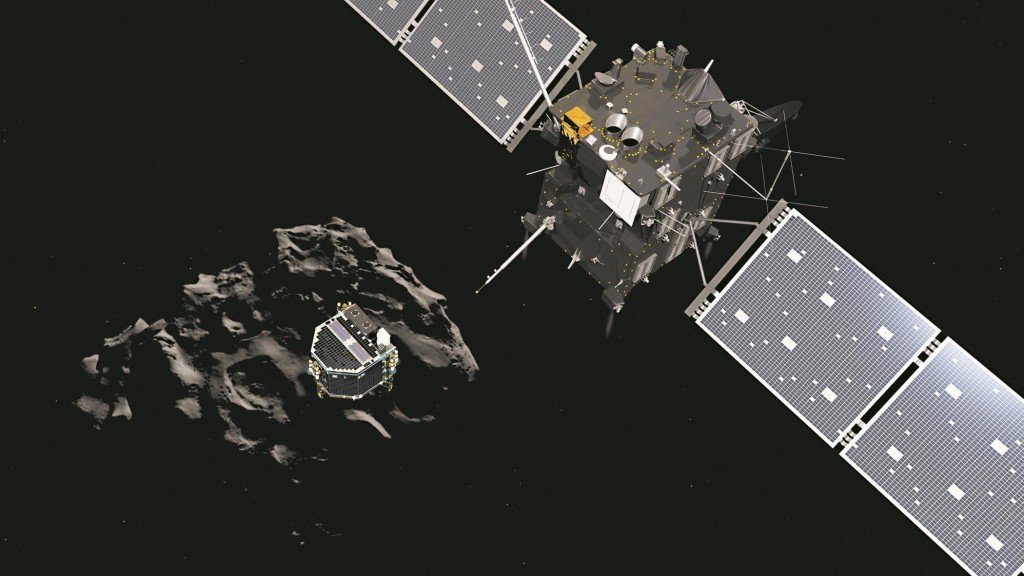 Landing with a bounce after traveling 4 billion miles, a European spacecraft made history Wednesday by successfully reaching the icy, dusty surface of a speeding comet.

The landing by the washing machine-sized crafter after a decade-long journey required immense precision, as even the slightest error could have resulted in stellar calamity.

Indications were that the spacecraft touched down almost perfectly, save for an unplanned bounce, said Stephan Ulamec, head of the lander operation.

Ulamec said thrusters that were meant to push the lander, called Philae, onto the surface, and harpoons that would have anchored it to the comet failed to deploy properly. Initial data from the spacecraft indicated that it lifted off again, turned and then came to rest.

Scientists were still trying to fully understand what happened and whether those failures would affect the lander’s ability to remain on the comet, called 67P/Churyumov-Gerasimenko. But so far, most of the instruments were working fine and sending back data as hoped, Ulamec said.

The landing team at mission control in Darmstadt had to sweat through a tense seven-hour wait that began when Philae dropped from the agency’s Rosetta space probe as both it and the comet hurtled through space at 41,000 mph.

During the lander’s descent, scientists were powerless to do anything but watch, because its vast distance from Earth — more than 300 million miles — made it impossible to send instructions in real time.

The head of the European Space Agency underlined Europe’s pride in having achieved a unique first ahead of its U.S. counterpart, NASA.

“We are the first to have done that, and that will stay forever,” said the European agency’s director-general, Jean-Jacques Dordain.

NASA contributed three instruments to the mission and its Deep Space Network of giant radio antennas has been key to communicating with Rosetta.

Eight-time spacewalking astronaut John Grunsfeld, now associate administrator for science at NASA, called the landing “a breakthrough moment in the exploration of our solar system and a milestone for international cooperation.”

“The data collected by Rosetta will provide the scientific community, and the world, with a treasure-trove of data,” he said in a statement.

Rosetta, which was launched in 2004, had to slingshot three times around Earth and once around Mars before it could work up enough speed to chase down the comet, which it reached in August. Rosetta and the comet have been traveling in tandem ever since.