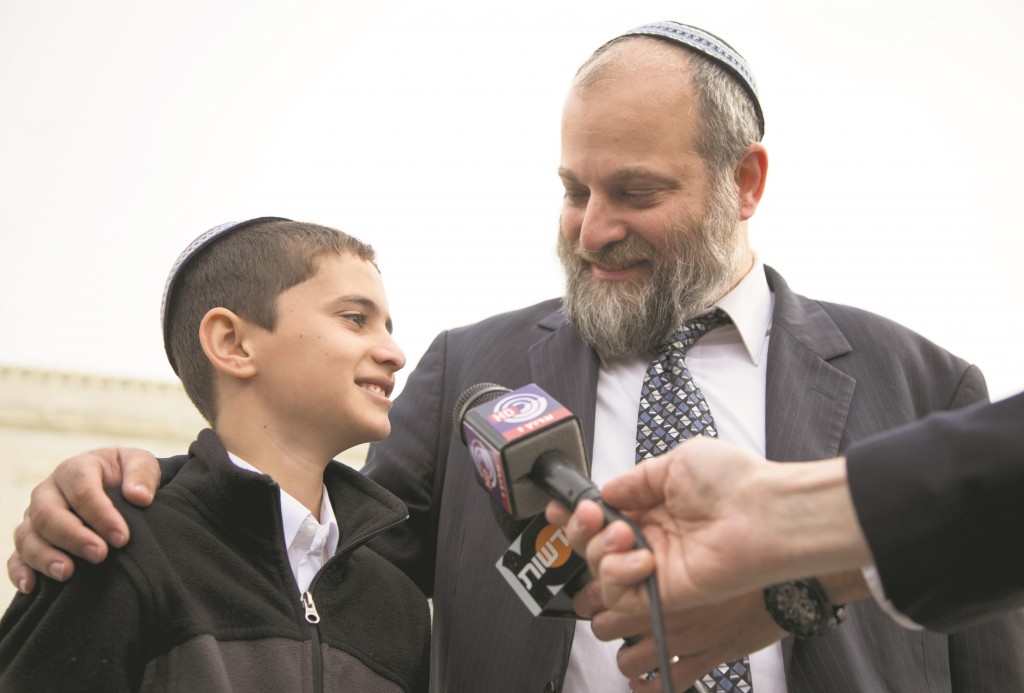 Middle Eastern politics infused the Supreme Court’s arguments Monday over a disputed law that would allow Americans born in Yerushalayim to list their birthplace as Israel on their U.S. passports.

The justices appeared divided over whether the law should be struck down as unconstitutional, as the Obama administration wants, or put into effect as a result of a lawsuit filed by the parents of Yerushalayim-born Menachem Zivotofsky.

Twelve-year-old Menachem, a baby when the case began in 2003, and his parents sat through the hour-long argument that saw justices wrestle with questions of the president’s primacy in matters of foreign affairs and the effect the court’s eventual decision could have on simmering tensions between Israelis and Palestinians.

Justice Elena Kagan called Yerushalayim a “tinderbox” at the moment and said the outcome of the case would be watched closely. “History suggests that everything is a big deal with respect to the status of Jerusalem,” Kagan said.

On the other side, Justice Antonin Scalia said of the law, “If it is within Congress’ power, what difference does it make whether it antagonizes foreign countries?”

The status of Yerushalayim has for decades been among the most vexing issues in Israeli-Palestinian relations. Israel has controlled all of Yerushalayim since the Six-Day War in 1967 and has proclaimed a united Yerushalayim as its eternal capital. The Palestinians have declared that east Yerushalayim will be the capital of their independent state.

U.S. policy has long refrained from recognizing any nation’s sovereignty over Yerushalayim and has held that the city’s status should be resolved through negotiations between the parties. Congress has for years tried to push administrations of both parties to recognize Yerushalayim as Israel’s capital. The U.S. has never enforced the passport law, on the books since 2002.

Like Kagan, the other liberal justices appeared willing to accept the administration’s argument that changing the wording on passports would damage the American role as a broker of peace in the Middle East and undermine the president’s credibility.

Justice Sonia Sotomayor used strong language in support of the administration’s position. Congress and the Zivotofskys are “asking the government to lie,” Sotomayor said. When Alyza Lewin, the family’s lawyer, protested, Sotomayor said, “How could you tell me it’s not a lie? You, the United States, are being asked to put on the passport that you believe the place of birth of this individual is Israel, and … the executive has said, no, we don’t think it was Israel, we think it was Jerusalem.”

The conservative justices were more skeptical of the argument put forth by Solicitor General Donald Verrilli Jr. They seemed open to Lewin’s argument that the passport language would not change U.S. policy toward Yerushalayim.

0No matter the issue’s sensitivity, Justice Samuel Alito said, “Our decision isn’t going to be based on any view that we may have about whether Jerusalem should be regarded as part of Israel or the capital of Israel.”

As he often does on a closely divided court, Justice Anthony Kennedy appeared to hold the controlling vote. Kennedy said at one point that the administration seemed to have the stronger argument. But he also suggested that a disclaimer on passports that American policy about Yerushalayim is unchanged could take care of the problem.

Verrilli doubted such a disclaimer would be effective. He called the status of Yerushalayim among the most vexing issues in the region.

The case is back before the court two years after the justices rejected lower court decisions that called the matter a political issue that should be resolved by Congress and the president without the help of the courts.

The federal appeals court in Washington then struck down the law as an unconstitutional intrusion by Congress on the president’s authority over foreign affairs.

Congress and the White House have argued for decades over support for Israel’s position on Yerushalayim.

In 1995, Congress essentially adopted the Israeli position, saying the U.S. should recognize a united Yerushalayim as Israel’s capital. In 2002, lawmakers passed new provisions urging the president to take steps to move the embassy to Yerushalayim from Tel Aviv and allowing Americans born in Yerushalayim to have their place of birth listed as Israel.

President George W. Bush signed the 2002 provisions into law but noted that “U.S. policy regarding Jerusalem has not changed.” President Barack Obama has taken the same stance.

In her arguments, Ms. Lewin also noted that if Congress’ law is implemented, the passports of U.S. citizens born in Yerushalayim “would be indistinguishable from all the other passports of individuals born in Tel Aviv or Haifa or anywhere else in Israel. That passport would not, when shown, be making any kind of political statement.”

That observation was repeated by Justice Scalia during the argument of Solicitor General Verrilli. If the law is implemented, Scalia said, “All you know is that the person was born in Israel. It could have been anywhere in Israel.”