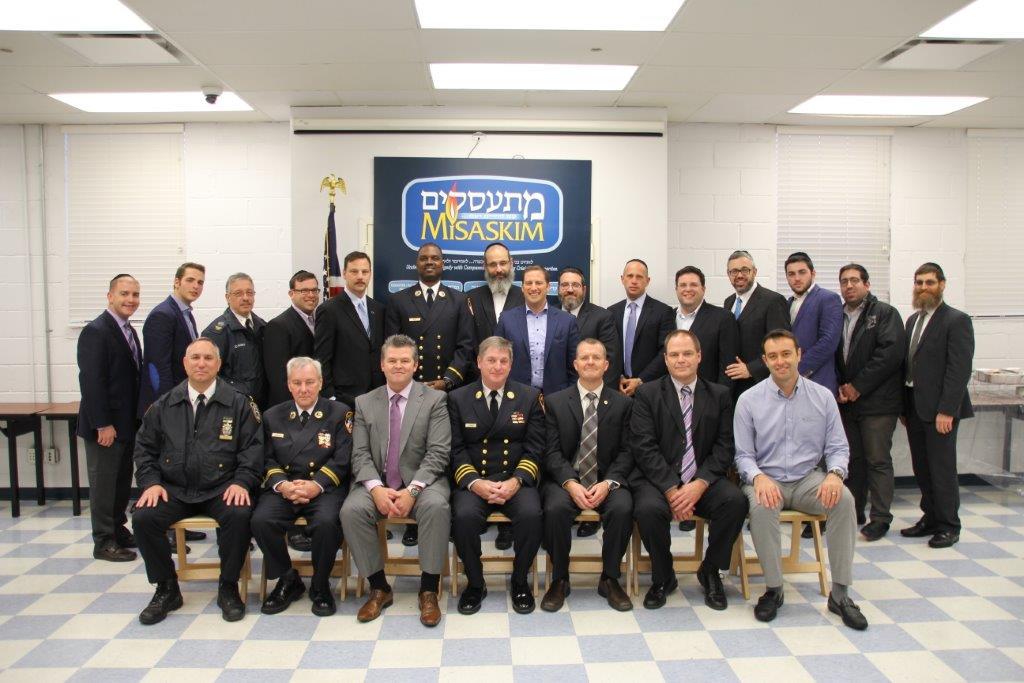 Thursday afternoon, Misaskim’s headquarters hosted a meeting which included representatives of its own organization, Hatzolah leaders, top Brooklyn fire department and police personnel, and several of their counterparts from Toronto.

“What you see here today, you will not see anywhere else,” Misaskim director Rabbi Yanky Mayer, who served as emcee for the event, told the group. “The wonderful bridges and relationships that exist between our community and the police [and] fire [departments] and so many other organizations is something to marvel [at].”

The gathering was organized by representatives of Gesher Canada, a relatively new organization based in Toronto, whose mission it is to coordinate between that city’s Orthodox community and government authorities.

“Our relationship with Misaskim is one that is cherished by cops,” said Brooklyn South’s Police Chief Owen Monaghan, who was the first speaker at the event. “We had a terrible crime here in Boro Park one year ago this week. We as the police came in to do our job, but who was there afterwards to help a family deal with such an event? That’s where Misaskim came in.”

The purpose of the meeting was to showcase to Toronto authorities the success and benefits of the warm professional relationship between organizations such as Misaskim, Hatzolah and Chaverim and local government authorities.

Leaders of Toronto’s EMS were in attendance. A Canadian police representative had been slated to attend, but was forced to cancel as a result of the recent terrorist violence in that nation’s capital. All speakers opened by conveying condolences on the tragedy.

FDNY Deputy Assistant Chief James Leonard gave an overview of his unit, which is also responsible for ambulance services, and its recent efforts in preparing to respond to possible Ebola cases. His closing remarks pinpointed the focus of the event:

“Public safety always comes first,” he said. “But you cannot do it without community support. We have all profited more that I can say from the mutual understanding and cooperation that we have in Brooklyn’s Orthodox community.”