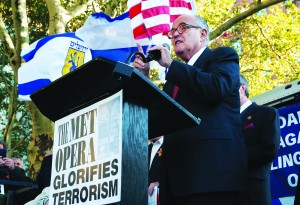 Mayor de Blasio defended the Metropolitan Opera’s right to show an opera criticized by many in the Jewish community as anti-Semitic and glorifying of Islamist murderers; he also criticized his Republican predecessor, Rudy Giuliani for protesting “The Death of Kinghoffer.”

“The former mayor had a history of challenging cultural institutions when he disagreed with their content,” said de Blasio at an unrelated news conference on Monday.

Giuliani joined a protest outside the Met on Monday against the opera, which is based on the 1985 killing of passenger Leon Klinghoffer on the Achille Lauro, an Italian cruise ship hijacked by four terrorists, members of the Palestinian Liberation Front. The 69-year-old was shot in his wheelchair and pushed overboard.

Among the other politicians taking part in the protest were U.S. Reps. Carolyn Maloney, a Democrat, and Peter King, a Republican.

Standing across the street from Lincoln Center, Giuliani said he wanted to warn people that this opera “is a distorted work.”

“If you listen, you will see that the emotional context of the opera truly romanticizes the terrorists,” he said. “…And romanticizing terrorism has only made it a greater threat.”

“I think there is a serious problem today in the world that has nothing to do with this opera,” de Blasio said. “There’s an anti-Semitism problem in this world today, particularly in Western Europe, that worries me greatly. That’s where my focus is. I don’t think an opera is what the focal point should be right now.

“The only thing I know about the opera is that the Metropolitan Opera has a right to show it,” he said.

Monday’s performance went on with a few orchestrated disruptions: Boos were shouted from scattered seats, and a voice kept yelling from a balcony, “The murder of Klinghoffer will never be forgotten!”

Klinghoffer’s daughters, Lisa and Ilsa Klinghoffer, released comments through the ADL to be included in the Met program. They say they believe the arts “can play a critical role in examining and understanding significant world events. ‘The Death of Klinghoffer’ does no such thing. It presents false moral equivalencies without context, and offers no real insight into the historical reality and the senseless murder of an American Jew.”

This article appeared in print on page 24 of the October 22nd, 2014 edition of Hamodia.