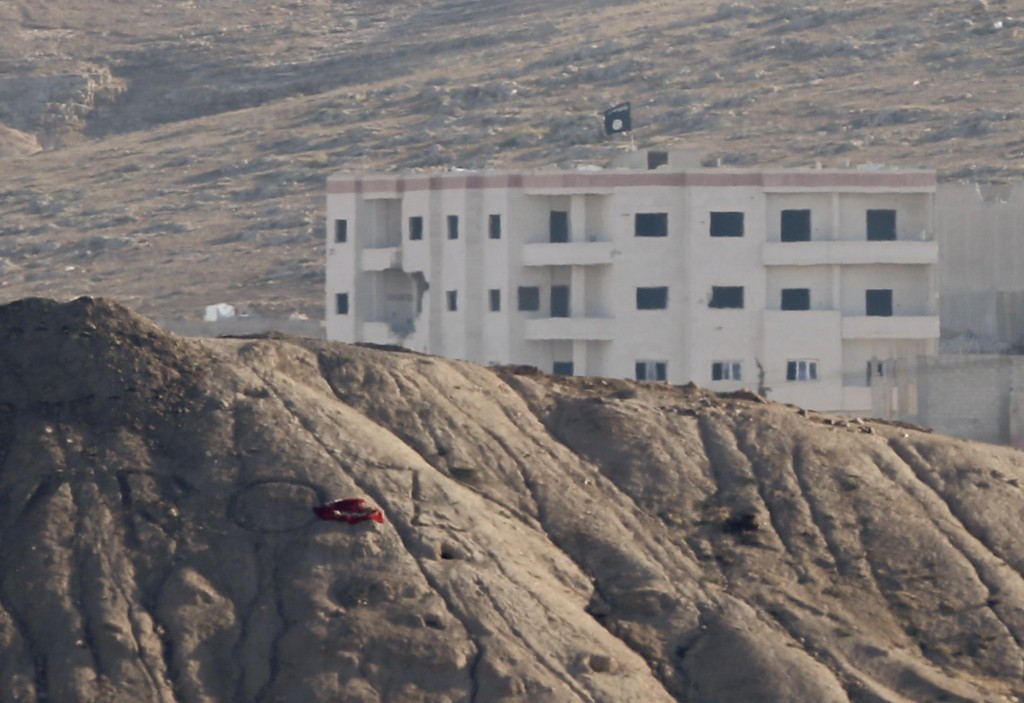 Islamic State backed by tanks and artillery waged a relentless assault Monday against a Syrian border town, advancing close enough to raise two of the group’s black flags on the outskirts despite stiff resistance from the town’s Kurdish defenders.

Just across the frontier in Turkey, the steady thud of artillery, gunfire and plumes of smoke rising over the rooftops testified to the intensity of the fight for Kobani, also known as Ayn Arab.

Since it began its offensive in mid-September, the Islamic State group has barrelled through one Kurdish village after another as it closed in on Kobani. The assault has forced some 160,000 Syrians to flee and put a strain on Kurdish forces, who have struggled to push back the extremists even with the aid of limited U.S.-led airstrikes.

Capturing Kobani would give the Islamic State group, which already rules a huge stretch of territory spanning the Syria-Iraq border, a direct link between its positions in the Syrian province of Aleppo and its stronghold of Raqqa, to the east. It would also crush a lingering pocket of resistance and give the group full control of a large stretch of the Turkish-Syrian border.

After heavy fighting overnight that left dozens dead on both sides, heavy clashes raged Monday to the south, west and east of the town.

“ISIS is advancing further toward Kobani day by day,” said Ismet Sheikh Hassan, the defense chief for Kurdish forces in the area. “ISIS is fighting with tanks and heavy weapons and they are firing randomly at Kobani. There are many civilian casualties because of the shelling.”

While the Kurds remain in control of Kobani, an Associated Press journalist on the Turkish side of the border saw two of the group’s black banners — one raised over a building and another from a nearby hill — at the town’s eastern entrance, indicating that Islamic State terrorists have established a presence on the town’s outskirts.

As fighting raged Monday within sight of the Turkish border, the country’s defense minister said the NATO alliance had drawn up a strategy to defend Turkey, a NATO member, if it is attacked along its frontier with Syria. The NATO move came at Turkey’s request, Defense Minister Ismet Yilmaz said.

Turkey has warily watched the fight for Kobani unfold. On Monday, at least 14 Turkish tanks took up defensive positions on a hilltop on Turkish soil near the beseiged town, while a shell from the fighting struck a house and a grocery store inside Turkey, but no one was wounded.