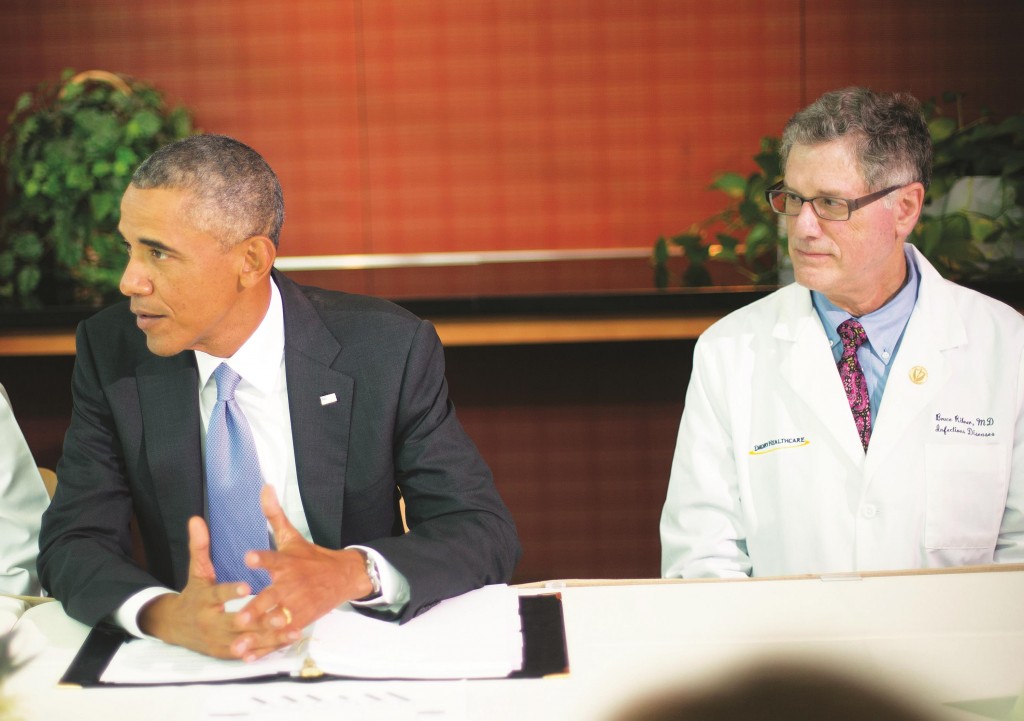 Calling the Ebola outbreak in West Africa a potential threat to global security, President Barack Obama is ordering 3,000 U.S. military personnel to the stricken region amid worries that both the financial and human cost of the outbreak is spiraling out of control.

“If the outbreak is not stopped now, we could be looking at hundreds of thousands of people affected, with profound economic, political and security implications for all of us,” Obama said Tuesday after briefings at the Centers for Disease Control and Prevention.

“It’s a potential threat to global security if these countries break down,” Obama said, speaking of the hardest-hit countries of Liberia, Sierra Leone and Guinea. At least 2,400 people have died, with Liberia bearing the brunt.

Obama outlined a series of new steps by the U.S. to help contain the outbreak, which he said is getting worse. The steps include sending military personnel, training health- care workers and erecting health- care facilities in Liberia.

He described the task ahead as “daunting” but said what gives him hope is that “the world knows how to fight this disease.”

White House press secretary Josh Earnest said the 3,000 troops would not provide direct care to Ebola patients. A substantial number will be stationed at an intermediate base in Senegal, Earnest said, with others at locations in Liberia.

The U.S. effort will include medics and corpsmen for treatment and training, engineers to help erect the treatment facilities and specialists in logistics to assist in patient transportation.

The World Health Organization warned that the number of Ebola cases in West Africa could start doubling every three weeks and that the crisis could end up costing nearly $1 billion to contain. Joanne Liu, president of Doctors Without Borders, said the global response was falling short. “The window of opportunity to contain this outbreak is closing,” Liu told a meeting Tuesday at the U.N. in Geneva.

Nearly 5,000 people have become ill from Ebola in Liberia, Sierra Leone, Guinea, Nigeria and Senegal since it was first recognized in March. WHO says it anticipates that figure could rise to more than 20,000.

With the addition of military personnel, administration officials said that the new U.S. initiatives aim to:

-Train as many as 500 health-care workers a week.

-Erect 17 heath-care facilities in Liberia of 100 beds each.

-Set up a joint command headquartered in Monrovia, Liberia, to coordinate U.S. and international relief efforts.

-Provide home-health care kits to hundreds of thousands, including 50,000 that the U.S. Agency for International Development will deliver to Liberia this week.