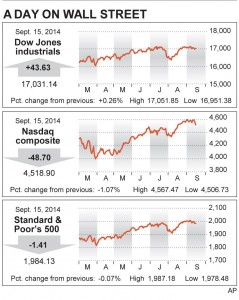 Fed policymakers start a two-day meeting Tuesday and many investors expect the Fed to indicate that it is closer to raising its key interest rate as the economy strengthens. The Fed has held the rate close to zero for over five years, and stocks have surged against that backdrop.

Among individual stocks, Molson Coors was the biggest gainer in the S&P 500.

The brewer’s stock rose $4.20, or 5.9 percent, to $76, after touching an all-time high. The brewer’s stock jumped on merger news in the beer industry. Heineken said Sunday that it rejected a takeover bid by SABMiller, the world’s second-largest brewer. Reportedly SABMiller tried to buy Heineken as a defense against an acquisition bid from industry leader Anheuser-Busch InBev.

The news on the economy on Monday was mixed.

U.S. manufacturing output declined in August for the first time in seven months, reflecting a sharp fall in production at auto plants. Output at manufacturing plants fell 0.4 percent in August after a 0.7 percent rise in July, the Federal Reserve reported.

On the other hand, a gauge of manufacturing in New York state jumped to 27.5 in August from 14.7 in July.

In government bond trading, prices rose. The yield on the 10-year Treasury note, which falls when prices rise, dropped to 2.59 percent from 2.61 percent late Friday, when it reached a two-month high.

Another big event that traders are watching this week is Thursday’s independence referendum in Scotland. With opinion polls showing the vote too close to call, there’s potential for some sizeable move in U.K. markets. The pound has turned volatile in recent weeks as opinion polls have narrowed. On Monday, the pound was 0.2 percent lower at $1.6231.

This article appeared in print on page 12 of the September 16th, 2014 edition of Hamodia.