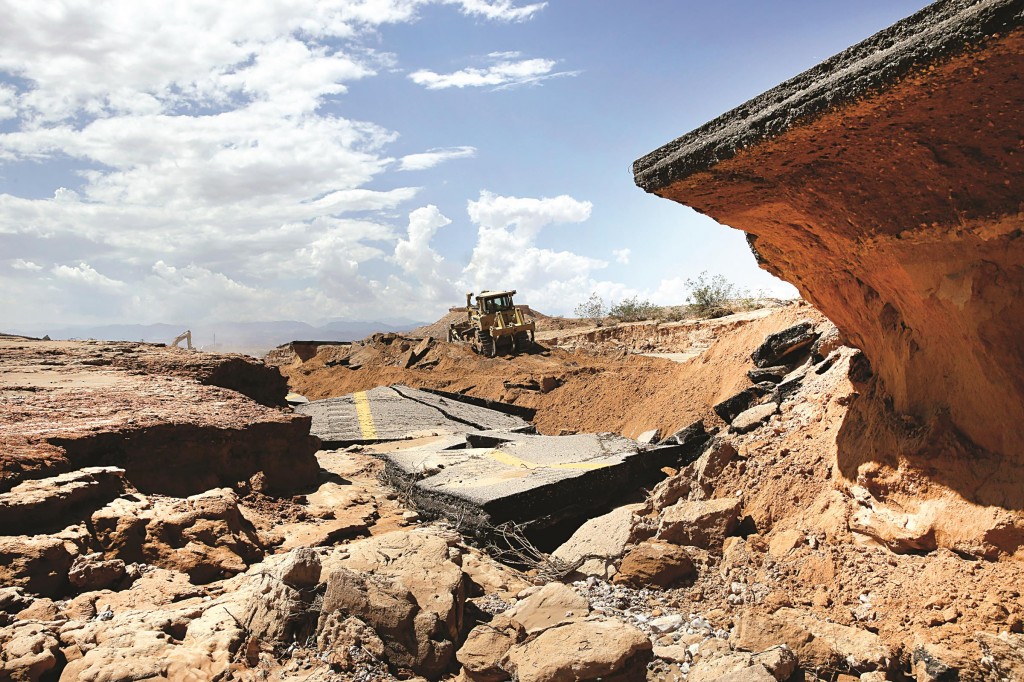 In what some term the area’s worst storm in decades, a 2-mile-long stretch of Interstate 15 in rural Moapa was destroyed by 4 inches of rain that lashed the roadway in just an hour on last Monday. The dying throes of Tropical Storm Norbert dumped as much rain on the area in 60 minutes as Las Vegas gets in a year.

The mother of all road detours has come for thousands of vacationers, sightseers and long-distance truckers, including delays of eight hours or more, with vehicles diverted onto a gantlet of winding two-lane roads that squiggle into the cactuses and scrub brush.

The roundabout has resulted in millions of dollars in losses for regional trucking companies and their customers. Drivers on already tight schedules — and with legal limits on how long they can spend on the road — have thrown up their hands.

“The worst backup I’ve seen in 25 years as a long-distance trucker,” said Ken Leth, 58, a driver for Las Vegas-based Truline Corp. trucking company who says he has clocked 3 million road miles. “You couldn’t get up and running. It was 20 miles an hour most of the way.”

“It’s been tough,” said Paul Enos, chief executive of the Nevada Trucking Association, which represents 530 companies. “Some people are getting desperate.”

In Nevada, 94 percent of all manufactured goods are delivered by truck — versus 69 percent nationally, he said. Much of that cargo travels along I-15, a commercial artery that in the damaged area handles 25,500 vehicles per day.

Since the storm hit, I-15 has been closed in both directions, and state transportation crews have worked around the clock to repair the damage. Officials opened one lane in each direction by late Friday, but only be for cars and light trucks.

That means, for at least another week, 18-wheelers will have to continue on a circuitous route through two states.

“Our system is equipped to handle those ‘worst-in-100-years’ storms, but this was much worse than that,” said Mario Gomez, an assistant engineer with the Nevada Department of Transportation.