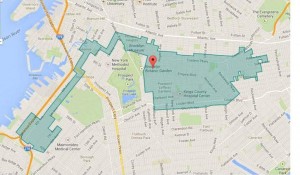 With a record dozen New York legislature seats open due to retirement, elections or corruption, the state was bound to have some competitive election, a change from the usual 93 percent to 7 percent outcomes incumbents receive.

Both Jesse Hamilton, who served as chief of staff to Adams, and Rubain Dorancy claim an array of endorsements and union backing in their quest to represent the 20th district, which includes the Jewish community in Crown Heights and sticks out like an excavator truck to grab a slice of Boro Park’s western edges. Hamilton has his boss’s backing, while Mayor Bill de Blasio supports Dorancy.

In an interview with Hamodia on Sunday, Hamilton, 51, discussed his efforts at bringing the black and Jewish communities together in the aftermath of the Crown Heights riots, his support for aiding parents of yeshivah students, and what can be done to stop the knockout scourge.

You’ve been in public service a long time if you were at the Crown Heights riots in 1991.

We held forums, and the project is still going strong. Devorah Halberstam will be the next president. She is one of the founders of the Jewish Children’s Museum and spoke out when her son [Ari, Hy”d] was murdered for a bias crime (Sic. It was a terror attack perpetrated by a Lebanese terrorist on the Brooklyn Bridge in 1994 — Ed.).

Anytime there was a swastika drawn, it was erased within one day by Jewish men and women and the community, people of color coming together, denouncing any bias crimes in the community. By taking away the swastikas, people understood: We do not tolerate anything that is biased.

Then I’ve been involved with the civilian police in our community, which have police patrols in the community. And also [participated in condemning] the Stark murder at Borough Hall. When that happened, we immediately mobilized. We didn’t have to think about it twice. We mobilized and we went down there because of our strong relationship.

While we’re talking about bias attacks, there was a flare up last year in knockout assaults. The black and Jewish communities came together to condemn it. And now it’s starting again. People are scared to go out, they’re scared to let their kids out. What can be done to combat that?

Well, when it first happened we were investigating it as being bias crimes, hate crimes. We went to the house of the young man who was assaulted by three other people. He was punched in the face and knocked to the ground.

Last year. As we started to investigate it, we realized that it was a bias crime, but it was part of this knockout game. So we had several press conferences.

This is something that we have to protect our children against. You don’t want to send your child out to be part of this knockout game. So now we’re working with Project Care, working with the precinct council in the 71st police precinct to figure out how we’re going to do it.

We know this happens around the time the kids are getting out of school, or around recreational periods. And there are certain corridors that we know the schools are at. We have identified potential people who commit the crime, because the average person is not going to enjoy the knockout game. Not everyone is going to go, “I’m going to go knock somebody out to today.”

So it’s children who basically have nothing else to do and find this to be something that’s fun. But it’s dangerous, because you can be hurt and you can be killed. So we’re looking at going into the schools and say, no one should knock out anybody. It’s a crime.

Have you seen any noticeable progress in this?

Yeah, it happened several months ago in the summertime. That’s when things usually flare up. And because the community has been proactive in monitoring what’s happening, we haven’t seen it for a long period of time. Now it’s flared up again, so the police department, the community, Project Care, the borough president, all the stakeholders are looking at this very seriously.

You can patrol and do as much as you can, but you can’t patrol against someone who is crazy. We can try to minimize it as much as possible, stamp it out. But we live in New York City, so if someone is crazy, they’re crazy.

OK, let’s go to some other topics. The Senate is divided. You have the Republicans, you have the Democrats and you have the IDC, which is the middle. Why would you want to go to Albany? What do you want to accomplish over there?

Could you be specific to our community, our readership? We all have the same housing and education problem, but the solutions are vastly different for our community than for other communities.

I live behind a yeshivah next to 770 (Lubavitch World Headquarters). We all pay property taxes and we all pay school taxes. And my kids used to go to private school, and I was paying more than yeshivah [parents]. So it was a double taxation. If I’m paying school tax and I’m not sending my kids to a public school, and have to pay for tuition for private school, I’m being taxed twice. I’m paying for the public school system, which I’m not participating in, and have to pay to the private school.

So the yeshivah and my private school dilemma is hard. I have two children. Some people may have four or five children who want to have their education in a religious environment and that should be their choice. There has to be more help — school voucher or tax credit for parents who do not send their kids to public school.

To be specific, will you support the Education Investment Tax Credit that was proposed for this year’s budget? It passed in the Senate and didn’t pass in the Assembly.

Yeah, I think at the end of the day everyone wants quality schools, good education and it shouldn’t matter where you get it from. If the public schools are not providing education that you feel you should have for your children, you shouldn’t have to pay for the public school system. You should be able to have assistance for sending your kids to the school of your choice.

I’m in favor of having assistance for people who send their children to private schools and yeshivos. I’ve gone through it. It’s a financial drain on many households, and they’re literally going into debt to make sure their kids get a solid education. Right now, under the previous administration, in my community only 17 percent of the people graduated on time. Seventeen percent.

Are you endorsed by the teachers union?

All the teaching unions, the UFT and CSA, have endorsed me.

Did you have to give any promises? They don’t take it very easily, this tax credit.

I think everybody wants to make sure that you have the most resources that they could possibly get for their organization. So they want more money to educate their kids, because they’re teaching all the children — the ones with disabilities, the ones who don’t have the support at home. It’s a monumental task to do. And so any money that comes out of the system, there’s less resources they have for the majority of the population of the kids in the school system.

You mentioned education and housing as the two things you’re going to go to Albany to fight for. Any personal issue you have that you would want to fight for?

Immigration is a big issue also. We have one of the largest immigrant populations in the city. We have a large Puerto Rican, Dominican, Latin American population, and also a growing Asian population. Then you have in the Crown Heights section a large Orthodox community that’s expanding, and one of the largest Caribbean communities, East Flatbush, in Brooklyn.

Right now the Dream Act, the New York State Senate voted it down, which would have given college tuition assistance to undocumented children. But it was voted down, which is an added burden on children going to school and trying to become positive people in our community. These are kids with good grades, working towards improving their life, being a productive citizen in our community and we’re telling them: no, get a minimum wage job.

How old were you when you first decided you wanted to go into public service?

It started in college. I went to college and it was the first time going to upstate New York, Ithaca College, and it was a different environment. I could be myself, rather than being tough. So I was able to be myself and my personality started to emerge. I just wanted to be helpful.

My grandmother was involved in the Civil Rights struggle. My mother operated the first municipal credit union in South Bronx. So I had a family tradition of being a community activist. My mother ran for the school board when I was younger and my father was on the board of Lincoln Hospital. So I was always surrounded by community activism and involved in it at a young age. But I didn’t truly take a leadership role until I got to college.

What is your relationship with the local Jewish community?

I have a long working relationship with the Jewish community, and I will continue to do so. I didn’t start this just yesterday. I started 25 years ago. So everybody knows who Jesse Hamilton is and they know what I stand for. We don’t tolerate swastikas.

When there was a bias crime, we put up posters in the community that we’re not going to tolerate any of this and that we are going to be proactive in finding out who you are.

But when they put my name, they put it in Hebrew, Yishai. So I would go to the shuls and I would say, I denounce the bias crimes against elderly women and the racial epithets. My name is Jesse Hamilton. And they’d say, oh, that’s Yishai.

So I’ve been around for a long time, and I will continue to be around to fight for the Jewish community.

This article appeared in print on page 6 of the September 5th, 2014 edition of Hamodia.