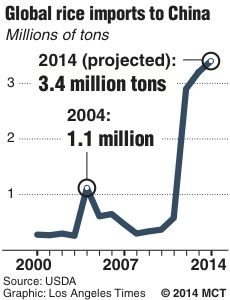 Greg Yielding was given a quixotic task: Travel to China and determine if consumers there would be willing to eat American rice.

So he set up tables at some of the most popular supermarkets in southern China, hung American flags and began dishing out steamy samples of rice from Arkansas and California.

“At first, they’d say, ‘There’s rice in the U.S.?’ ” said Yielding, head of emerging markets for the U.S. Rice Producers Association, a Houston-based trade group. “And we’d have to show them a map to explain that it’s grown in California and the South. Then they’d try it, and they would really like it.”

Chinese importers, distributors and grocery chains lined up. Selling U.S. rice to China seemed like a slam-dunk. But eight years after Yielding’s first venture on behalf of the U.S. industry, not a single shipment of American rice has officially made it into Chinese hands.

That won’t happen until the two countries agree on a so-called phytosanitary protocol, which determines the necessary steps U.S. rice exporters must take to mitigate pests such as insects. The disagreement highlights the growing pressure on U.S. agricultural producers to either accommodate China or risk being shut out of the world’s largest emerging consumer market.

That might not have mattered a decade ago, when U.S. farmers could rely on domestic buyers or traditional foreign markets such as Mexico and Canada. Today, China’s swelling appetite for food is touching agribusiness everywhere and forcing companies to choose whether to adapt.

Those that comply are seeing dividends. American agricultural exports to China rose to a record $25.8 billion last year, from $5 billion a decade earlier.

Until a few years ago, no one would have considered exporting much rice to China, the world’s largest producer and consumer of the grain.

Tim Johnson, president and CEO of the California Rice Commission, called it “the ultimate example of selling ice to the Eskimos.”

But starting in 2012, China went on a spree, scooping up millions of tons of the grain from countries such as Vietnam, Pakistan and India. China is now on pace to import a record 3.4 million tons of rice this year — six times more than it did in 2011, according to the U.S. Department of Agriculture.

Chinese regulators want the U.S. rice industry to expand the use of insect traps down the supply chain and keep records of their findings. The USA Rice Federation, a trade association in Washington, D.C., that represents millers, merchants and 90 percent of the country’s rice growers, called the Chinese demands “unrealistic and onerous.”

The U.S. Department of Agriculture’s Animal and Plant Health Inspection Service declined to provide details about the negotiations. A spokeswoman said the agency was currently reviewing the latest Chinese response, received Aug. 1.

Dairy farmers in Nevada also built a first-of-its-kind milk-powder plant to meet China’s preference for whole-milk powder rather than the skim-milk powder standard in the U.S.

But there are industries that remain shut out.

While other products struggle to win access, the U.S. rice growers are hopeful that officials in Washington and Beijing can come to terms as early as next year. If they do, analysts estimate, U.S. rice exports to China could reach several hundred million dollars a year. That would make China a top buyer of the American grain, on par with Mexico and Japan.

Though it produces only 2 percent of the world’s rice, the U.S. accounts for nearly 10 percent of the rice traded globally — enough to make it the fifth-biggest exporter. About half the rice grown in the U.S. ends up abroad. Still, rice consumption in China is so high that the country could eat through America’s annual production in 17 days.

American rice producers can’t meet that sort of mass demand — nor do they want to. Their interest is in selling packaged rice to China to fill a high-end niche. The rice-producers association’s survey of Chinese consumers buttressed that idea. Despite the concerns of Chinese regulators, shoppers in China overwhelmingly perceived U.S. rice as a safe alternative in a country hit by myriad food-safety scandals.

Josh Sheppard, a fourth-generation rice grower in Biggs, Calif., about 60 miles north of Sacramento, said he’d welcome Chinese buyers because they probably would pay more for his grains than U.S. customers — much the way Japanese buyers currently do. That’s especially important now, when drought has cut rice acreage in the state by 25 percent.

“We don’t want to compete down in the gutter. We consider ourselves a premium product, like a fine wine,” said Sheppard, who heads a rice-farming cooperative in Butte County that’s already made plans to export to China.

The cooperative is managed by Stuart Hoetger, co-founder of Stogan Group, an agricultural consulting firm in Chico, Calif.

Hoetger has arranged a partnership between the rice growers and Chinese food and agriculture conglomerate Wufeng.

Medium-grain rice known as Calrose grown by the cooperative is being shipped in limited quantities to Chinese ports, where Wufeng is redirecting it to customers in small markets such as the Solomon Islands, the idea being that Hoetger and his growers will be ready to ship to China shortly after a trade agreement is finalized.

“If China asks for something, you do it,” Hoetger said. “You ask any farmer that’s sold to China in the last few years, and they’ll tell you they’ve made a lot of money.”