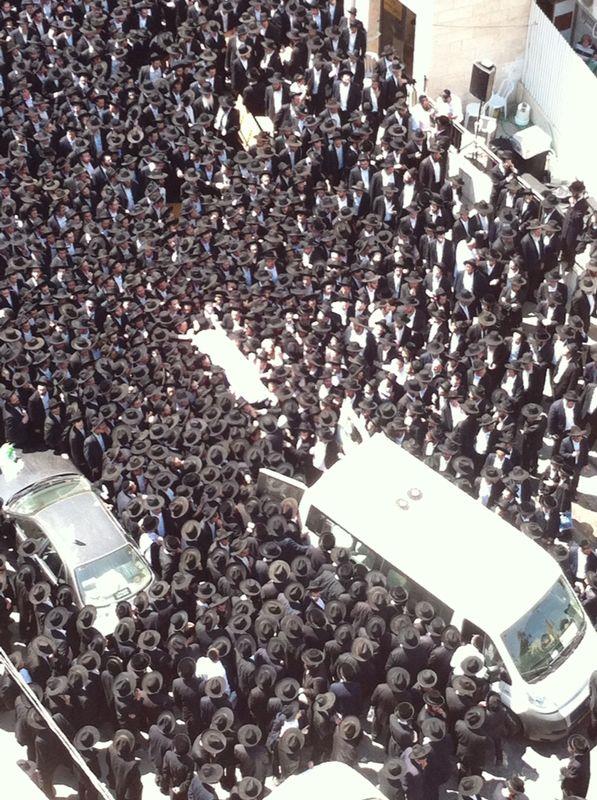 In the heat of the summer in Yerushalayim, thousands gathered Friday morning to give kavod ha’acharon to habachur Aaron Sofer, z”l, tragically niftar last week and only found on Thursday.

American bachurim and avreichim, Israeli bnei Torah, chassidim, Sephardim, everyone felt a part of this tragedy that has befallen the community. Most of the volunteers who helped in the search did not know Aaron Sofer personally, but they were impelled by “areivim kol Yisrael”; at the levayah the same feelings prevailed.

The levayah set out from the street in front of the yeshivah where Aaron learned, the yeshivah of Harav Tzvi Kaplan, shlita, on Rechov Even HaEzel in the Ezras Torah neighborhood.

The first maspid was Harav Yaakov Waldenberg, Rav of the Ezras Torah neighborhood, a grandson of Harav Eliezer Waldenberg, zt”l, mechaber of Tzitz Eliezer. He began by stating that whatever Hashem does is not only for the good, but it is also just; it is all omek hadin, the profundity of justice.

He discussed the halachah of eglah arufah (read this past Shabbos): When a body is found outside the city, the zekeinim and shoftim of the city came forth and proclaim “Yadeinu lo shafchu es hadam hazeh,” our hands did not spill this blood. But who would think of accusing them of such a thing? The Gemara (Sotah: 44) says that what they are saying is that they didn’t let him leave the city without food and drink — without his needs being attended to. Harav Leib Chasman, zt”l, Mashgiach of Yeshivas Chevron, said that this means that if they did give the man food and drink, they fulfilled their obligation of responsibility of Yidden for one another. “Kaper na le’amcha Yisrael, forgive Your nation Yisrael,” the kohanim then pray. “Since we tried our best to help find Aaron, not neglecting him, chas v’shalom, may we all be zocheh to kapparah and the Geulah,” Rav Waldenberg concluded.

Next, Harav Yitzchak Tuviah Weiss, Gaavad of the Eidah Hachareidis, mourned the loss of a ben Torah, a scion of chashuve Rabbanim, calling it a loss not only to the bereaved parents, family and friends, but to all of Klal Yisrael, as Aaron was surely destined to be a marbitz Torah too. Harav Weiss concluded his hesped with a call to all to learn from Aaron and strengthen themselves in Torah and maasim tovim as Rosh Hashanah approaches.

Harav Yerucham Kaplan, father of Harav Tzvi Kaplan, was the next maspid. “Baruch attah be’voacha u’varuch attah be’tzeisecha!” he began. Aaron was born into a Torah family, lived the life of a ben Torah, and was niftar as a ben Torah. Bilam requested, “Tamus nafshi mos yesharim,” he wants to die as a Yid dies. The Chofetz Chaim says: To die as a kosher Yid — of which even Bilam realized the value — one must live like a Yid. It may not always be easy, but that’s what it takes. Aaron was zocheh to live his life in the tent of Torah and to pass away a ben Torah.

Found after a week of yissurim, Aaron was still wearing his jacket and hat. A real ben Torah doesn’t change his garb during bein hazmanim. “You were Aaron with all the bigdei Kehunah,” the Rosh Yeshivah said emotionally.  “You took the beis medrash with you on all your pathways, even on your last and fatal one, and arrived at the beis din shel maalah with 23 years of Torah and yiras Shamayim, kulam shavim l’tovah.”

Aaron, he said (speaking in English), was a masmid — every hour of learning was a full hour. He learned with a geshmak, he never missed tefillah b’tzibbur, and he always came early to prepare to daven before davening. He called home twice a day, and never did anything without his parents’ consent. He was medakdek b’mitzvos, checking into every detail again and again until it was perfectly clear. Reb Moshe Tzvi said that his son was surely going straight to the Yeshivah shel Maalah as an adam hashalem.

He thanked all the volunteers and the organizations for their help in the search, and all of Klal Yisrael for their tefillos and kabalos tovos on behalf of his son.

It was announced that Gedolei Yisrael request that women light Shabbos candles early, and men learn something extra before Shabbos in memory of Aaron.

The levayah then left to the Eretz Hachaim cemetery, just outside Beit Shemesh, where Aaron came to kevurah near his grandfather, at the auspicious time of Erev Shabbos after chatzos.