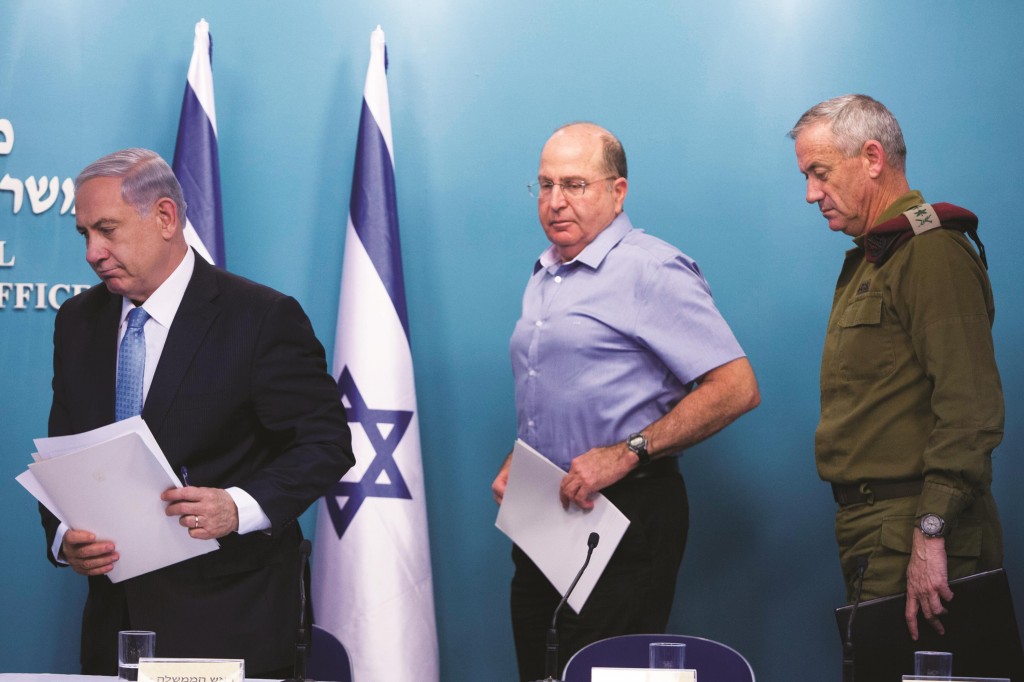 Israeli Prime Minister Binyamin Netanyahu defended the ceasefire with Hamas in a broadcast to the nation on Wednesday evening, saying that the terrorist organization suffered serious damage and did not win its demands at the end of 50 days of fighting.

The speech came after a day when Netanyahu faced a barrage of criticism for an outcome which many in the country found bitterly disappointing.

“A thousand Hamas terrorists were killed, many of them commanders. Thousands of rocket arsenals, launch sites and weapons caches were destroyed along with hundreds of command centers,” said Netanyahu.

“Hamas did not achieve any of its demands,” the prime minister stated, as he was flanked by Defense Minister Moshe Yaalon and IDF Chief Lt.-Gen. Benny Gantz.

Netanyahu expressed confidence that a long period of quiet in the south had been secured.

Defense Minister Moshe Yaalon spoke after Netanyahu and said that the goal of the operation was to return “quiet and security to the citizens of Israel, who have been suffering for many years.”

Yaalon met with leaders and residents of the hardest-hit communities and towns in the south, he said, and they had “revealed incredible courage and faith.”

“We have said that we will not accept such a reality” of rockets continually showering down on Israel and that Israel “will continue to pound Hamas if it resumes its attacks across the border.”

Gaza, he said, does not look like it did 51 days ago, “and when the dust settles Hamas will realize that it gained no achievements.” He added that the leaders of Hamas know they have not had any successes.

So far, Israel has committed only to expanding the flow of civilian goods and humanitarian and reconstruction aid into the Hamas enclave, provided the truce is honored. Demands for a seaport and a lifting of the blockade, as well as Israeli demands for demilitarization of Gaza have been put off for negotiations to begin a month from now.

“We have no problem with civilian support for Gaza,” said Mark Regev, a spokesman for Netanyahu. “We don’t want to see Hamas rebuild its military machine.”

While the air raid sirens have fallen silent — at least for the time being — angry sounds of discontent could be heard from newspaper columnists, residents of the south and members of the government coalition itself.

“After 50 days of warfare in which a terror organization killed dozens of soldiers and civilians, destroyed the daily routine [and] placed the country in a state of economic distress…we could have expected much more than an announcement of a ceasefire,” analyst Shimon Shiffer wrote.

“We could have expected the prime minister to go to the President’s Residence and inform him of his decision to resign his post.”

Nahum Barnea, one of Israel’s most popular columnists, expressed concern “that instead of paving the way to removing the threat from Gaza, we are paving the road to the next round, in Lebanon or in Gaza.”

“The Israelis expected a leader, a statesman who knows what he wants to achieve, someone who makes decisions and engages in a sincere and real dialogue with his public,” he wrote. “They received a seasoned spokesperson, and very little beyond that.”
Senior journalist Ben Caspit said that there was no victory for Israel in a conflict that resulted in “a collapsed tourism industry (and) an economy approaching recession.”

Coalition members whose sniping at the prime minister’s handling of the crisis was almost unprecedented during wartime, were at it again on Wednesday.

Foreign Minister Avigdor Lieberman said that Israel must not make any diplomatic deal with Hamas.

“It is impossible and forbidden to trust lowly murderers. Therefore, we are against a ceasefire that allows Hamas to rearm and wage another battle against Israel whenever it finds it comfortable,” the foreign minister said.

A poll released earlier in the week showed that public support for Netanyahu has plunged dramatically. Just a few weeks ago, at the start of the military campaign in Gaza, Netanyahu’s support had reached an extraordinary 82 percent. But as of this week, only 38 percent of Israelis said they were satisfied with his leadership, according to a Shiluv Millward Brown and iPanel poll released on Monday. Only three weeks ago, approval for Netanyahu was at 63%.

Perhaps the most stinging comments came from the south, which has borne the brunt of the fighting.

“I have lost total confidence in the Israeli government and the leadership that declares slogans which you eventually realize are just slogans,” the head of the Eshkol Regional Council, Haim Yellin, told Army Radio on Wednesday.

He cautioned residents of the area who evacuated to wait at least two days before returning home, to ensure that the situation has stabilized. About two weeks ago, the IDF announced it was safe to return, but those who did found themselves under attack again almost immediately as the ceasefire collapsed.

Arutz Sheva reported that people in the Gaza Belt region are disappointed with the prime minister for accepting a ceasefire with Hamas.

Tamir Idan, who heads the Sdot Negev Regional Council, said that “if the reports in the media are right, and the agreement for a ceasefire is for one month only, in which Hamas’s demands for constructing ports will be discussed, then this is a surrender to terror.”

He also refused to accept Israel’s lack of response to a last-minute attack by Hamas that killed two men in Kibbutz Nirim on Tuesday.

“Israel’s tacit acceptance that it is alright [for Hamas] to fire without limits, and without a response, before the ceasefire goes into force, is a very grave matter. We demand that the Israeli government and the IDF stand behind their commitment to respond in a meaningful way to any fire.”

Itamar Shimoni, Mayor of Ashkelon, said that any compromise with Hamas is a surrender to terror. “The residents of Israel and the south wanted to see a decision in this campaign, but this will apparently not happen,” he stated.

However, Netanyahu’s national security adviser, Yossi Cohen, urged listeners to Army Radio on Wednesday to understand that, contrary to the chorus of criticism, much had been achieved.

Cohen said that Israeli soldiers and civilians did not die in vain. “I think that a situation has been created that gives us the potential for a new reality and for a new diplomatic horizon.”

Cohen argued that the international community had come to the understanding that the status quo in Gaza  is untenable. “Therefore in Gaza they won’t get a seaport unless they agree to be demilitarized…they won’t get a single screw unless we are assured that it won’t be used to help Hamas rearm,” he said.