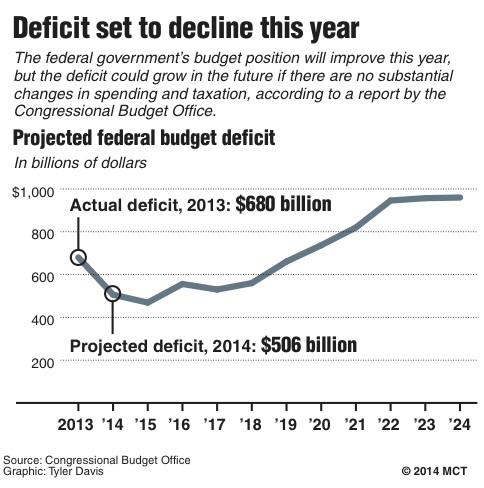 The federal deficit continues to decline, thanks to budget cuts, slower growth in Medicare costs and increased tax revenue, but the nation’s long-term fiscal outlook remains troubled, according to a report Wednesday from the Congressional Budget Office.

At $506 billion for fiscal 2014, the federal deficit is much smaller than those of recent years and is now 2.9 percent of gross domestic product — down from a high of 10 percent of GDP in 2009, during the Great Recession.

Though economic growth has lagged at an average annualized rate of less than 1 percent for the first half of the calendar year, the CBO said it expects stronger economic activity in the second half will push growth to 1.5 percent for the year. The unemployment rate is expected to continue to decline, it said.

Despite improvements in the economic outlook after years of fiscal battles between Congress and the White House, the nonpartisan budget office warned that long-term projections remain dim.

The forecast released Wednesday shows a slightly higher budget deficit for the year than was projected in April, as revenue dropped “mostly because of lower than anticipated receipts from corporate income taxes.”

The ability of corporations to dodge taxes has become a heated political issue that President Barack Obama has vowed to address this fall.

Looking ahead, the budget office said long-term growth will remain below average, 2.2 percent through 2024. Federal spending — largely from a projected 85 percent increase in health-care costs — is expected to push deficits back up.

Such a mismatch would send debt on track to consume 77 percent of GDP in 2024 — more than double the debt load that occurred when President George W. Bush was in office.