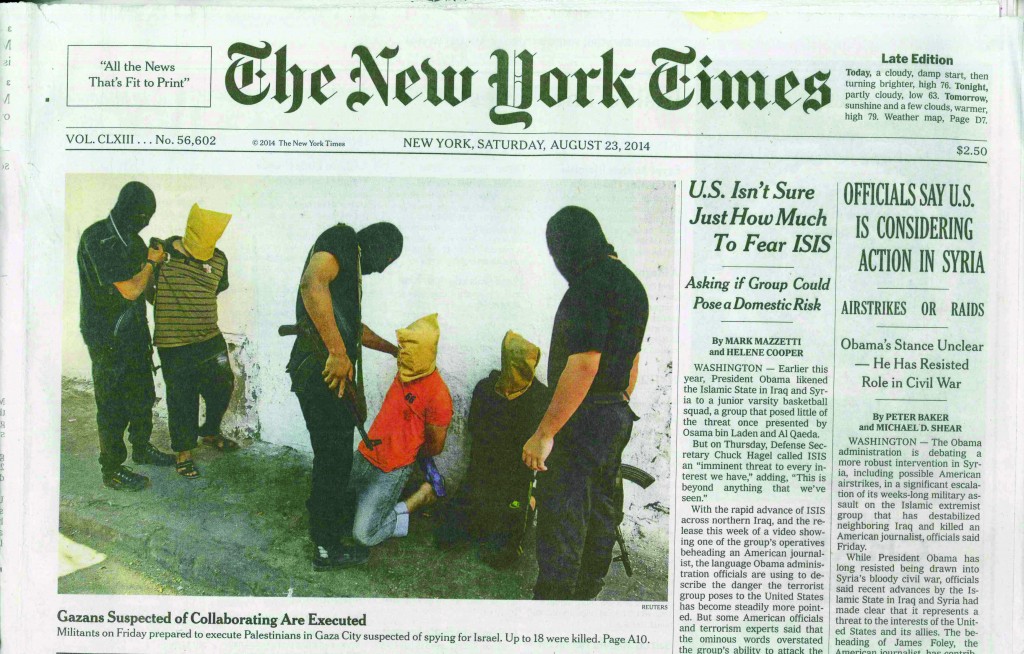 Back in 1911, legendary newspaper editor Arthur Brisbane, giving advice to other people running newspapers, said, “Use a picture. It’s worth a thousand words.” And thus the saying, “A picture is worth a thousand words,” was born. It has been the one constant in the evolution of the media over the last 100 years since Brisbane first said it; a visual is simply more powerful than the printed word alone.

Although it is largely understood as a higher standard of evidence, it is quite clear that is not the case. During the early days of Operation Protective Edge, for example, many pictures and videos were shared, broadcast and published which were alleged to be of innocent “victims” of Israeli “atrocities.” Many of these photos, however, were from places like Syria, where both Assad and ISIS are butchering civilians, providing ample fodder for misrepresentation.

The most famous case of this was back in 2000, when yeshivah student Tuvia Grossman was stabbed and beaten by an Arab horde on his way to the Kosel. Grossman and his friends were saved by a group of Israeli border police, and an AP photographer took a picture of a bloodied Grossman with the Chief Superintendent of the Israeli East Jerusalem Border Police, Officer Gidon Tzefadi, standing over him, waving his club at the mob in an effort to protect him. The New York Times ran the photo, but they captioned it, “An Israeli policeman and a Palestinian on the Temple Mount.”

That lie of a caption led many people to believe that Tzefadi was actually beating an innocent Arab boy, when in reality he was saving someone innocent from a terrible end at the hands of the people he was supposedly abusing. In other words, it represented the picture to be something it was not.

Other times it is more blatant.

In the 2006 Lebanon war, Reuters had to retract pictures taken by photographer Adnan Hajj after he was caught using Photoshop to manipulate his photos to make Israeli military actions look much worse than they really were. That came at the same time that there were allegations of picture staging and improper captioning by media outlets who were more or less just reporting whatever Hizbullah told them as fact.

In the weekend editions of The New York Times and the Wall Street Journal, an identical picture was featured on the front page. In the picture one can see three men with bags over their heads, hands tied behind their backs. They are against a wall, and surrounded by three black masked terrorists. These men, it turns out, were executed by Hamas in middle of the street, accused of providing Israel with the information that led to the successful strike that killed three Hamas leaders.

It is encouraging that The New York Times is willing to concede that such barbarism actually did occur. But one needs only to compare the two photo captions, one from WSJ and one from The Times, and it will be clear that there is something wrong.

The WSJ picture has bold type on top of it proclaiming “Justice, administered Hamas-style,” and a caption below which reads, “Broad daylight: Hamas militants executed 18 people Friday, some on crowded streets in the middle of the day, accusing them of aiding Israel.”

In 27 words, the Wall Street Journal was able to give a short summary of the atrocity that took place. Hamas took people, without a trial or any sort of legal process, and publicly executed them in order to discourage anyone from entertaining any thought of not falling directly in line behind them. That is justice, Hamas-style.

Surely the liberal New York Times, with its love for the American legal system, the presumption of innocence and its hatred of the death penalty, would be outraged enough to accurately portray this despicable behavior to its readers. That shouldn’t be too much to ask for, should it?

The Times caption reads simply, “Gazans suspected of collaborating are executed: Militants on Friday prepared to execute Palestinians in Gaza city suspected of spying for Israel. Up to 18 were killed.”

Maybe it’s the low bar of expectations that The New York Times set for itself that lends itself to us being happy that they printed the picture at all. It’s that same low bar that makes one thankful that The Times did say they were “suspected” of collaboration, and not “collaborators.” But that’s about it.

Consider this. The editorial board of The Times has time and time again written editorials that promote the idea of a moral equivalence between the Israelis and Hamas. It is clear where they stand on this; they want their readers to believe that the position and actions of Hamas are just as valid as Israel’s.

But that argument would suffer a heavy blow if their readers were to see the barbarism with which Hamas treats its own people. Especially if they were to compare that to Israel, where the military protocols are constantly being revised by the Supreme Court — wouldn’t that make for a grand moral equivalent?

So they need to sugar-coat it, and caption the photo in a way that it seems more benign. Instead of a mass execution in the street without any sort of due process, the readers see an execution of traitors — which is easier to stomach.

And The Times continues its shoddy reporting on Israel, proving that besides the new headquarters, not much has changed at The New York Times since 2000.