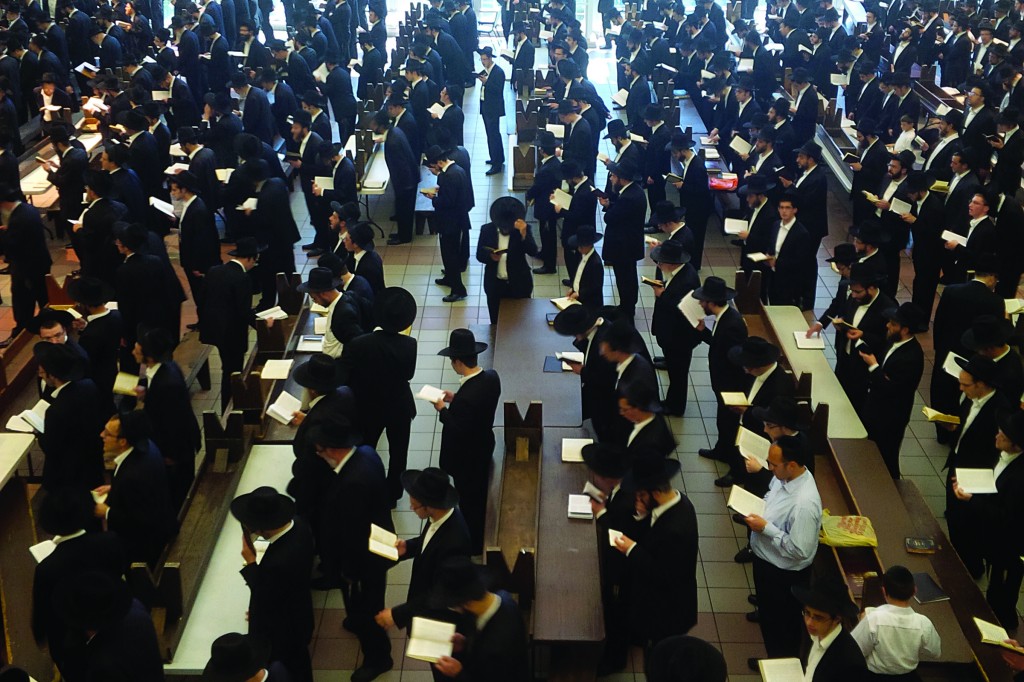 As efforts to find Aaron Sofer intensified, the Jewish community rallied behind the family in their time of crisis. Aaron, a yeshivah student in Yerushalayim from Lakewood, New Jersey, disappeared without a trace last Friday.

The parents, who have flown to Israel, made an emotional appeal to the public on Tuesday for help in finding their son.

“I want to thank everyone for all the help, but I ask you, please, please, please — I beg of you, beg you — please, if anyone sees any whereabouts of Aaron, please call the police immediately!” his mother, Chuldah, said in tears.

The FBI and the American Consulate have joined hundreds of local police and volunteers in the search for the 23-year-old American who has been studying in Yerushalayim for about one year.

“The police are working tirelessly on all fronts, and all options are being strongly investigated,” Sofer’s father, Moshe, said. “We would like to thank the American Consulate, the office of the Consul General, the FBI and the Israeli Police and ZAKA for all their efforts in trying to find our dear son Aaron.”

The family offered a 100,000 shekel reward on Tuesday to anyone who helps them find their son.

Aaron Sofer, who has been studying at Harav Tzvi Kaplan’s yeshivah in Yerushalayim, was last seen on Friday around midday in the Jerusalem Forest, where he had gone hiking with a friend. The two went up a steep incline together, but got separated on the descent.

The friend repeatedly called Aaron’s name to be sure he was still behind him, and Aaron answered. But then he called and heard no answer. He called again, and still no answer. Because of the steepness of the terrain he was unable to climb back up and look for him, but instead complete the descent. When Sofer did not appear by six that evening, the friend filed a missing-person report.

“The family would like the search and rescue operation to be more focused and intensified.”

Hirth told Hamodia that the family is very grateful for the efforts of the police department heretofore, and felt that they were doing all that they could.

Hirth mentioned the Muhammad Abu Khdeir murder in the same forest last month, by Jewish assailants, compounded by heightened tensions with Palestinians, as additional cause for alarm.

“It’s well known that a murder took place recently in that forest, and especially with the ongoing tensions with Palestinians, we feel there should be a military presence and involvement in the search for Aaron,” he said.

Sofer is described as approximately 5 feet 9 inches tall, slender, with a close-cropped red beard, wearing glasses, a white shirt, yarmulke and black trousers at the time of his disappearance.

Anyone with information that may assist in locating Sofer has been asked to call 02-539-1520, or the Israel Police hotline at 100.

Meanwhile, in Lakewood, hundreds attended a press conference at the Lakewood Town Hall on Tuesday morning to raise awareness of the situation.

New Jersey Congressman Chris Smith expressed the hope that his constituent Aaron Sofer, will be found and returned to his family, and called for the State Department to assist in every way possible.

“I learned about Aaron Sofer over the weekend and became very concerned for his well-being. I immediately sent a letter to Secretary of State John Kerry Monday, urging that the State Department take every action to help in the effort to locate Aaron,” said Smith, a senior member of the House of Representatives Foreign Affairs Committee.

“Today, in response, Secretary Kerry’s chief of staff, David Wade, assured me that the Department ‘was totally committed to assisting Aaron and his family,’” Smith said.

As a result, Kerry’s office has been applying pressure on the FBI in Israel to lend a hand.

Smith and his staff have spoken with Aaron’s father and uncle, both of whom are in Israel to assist and advance the search.

“I hold to hope that Aaron will be located and returned to his family safely,” Smith said. “Until that day comes, he and his family are in our prayers, and I will work with the State Department to use all resources available to find him and bring him to safety.”

“My thoughts are with Aaron, his family, and the entire Lakewood community as the search for this bright, devout, and loving young man continues. I’m deeply concerned about his disappearance and have been in consistent contact with the State Department and U.S. officials on the ground in Israel since this was reported. I’m praying for his safe and speedy return. I will continue to press for all possible resources to be used to help locate and return Aaron to his family.”

Rav Yisroel Schenkolewski, a community activist in Lakewood, told Hamodia that “it is going to be national news across the U.S. This [press conference] is to send the message to Israel that they have to … do everything that they can to find this boy.”

“Chris Smith said that if there is a need he would drop everything and take the next plane to Israel to do whatever he can,” Schenkolewski said.

“It is critical that the media does not lose sight of this,” Moshe Sofer said. “As any parent could understand, we are desperate to find our son and ask that he is not forgotten during this critical time.”

New York State Assemblyman Dov Hikind told Hamodia after the press conference, “Time is of the essence. Every hour that goes by and we do not find Aaron is reason for greater concern.

“It is very scary and we hope everything will be good. But there is a lot of concern that the necessary resources were not drawn on from the beginning.

“They should treat him no differently than if he was a missing soldier. We all know the importance of the learning of so many yeshivah students.

“My nephew left on a plane yesterday with a plane packed with boys headed to learn in yeshivos in Eretz Yisrael. The government must take seriously the responsibility to protect them,” he said.

The Assemblyman, echoing the call of Rabbanim, urged everyone to say Tehillim and take upon themselves some additional Torah or mitzvah to provide zechuyos for Aaron Sofer.

“I am deeply concerned over the disappearance of New Jersey student Aaron Sofer in Israel and I stand in solidarity with his family. My thoughts are with them and the Lakewood community during this trying time. By all accounts, Aaron is a devout and dedicated student, who traveled to Israel to enhance his knowledge and deepen his understanding of sacred Jewish texts. For yeshivah students like Aaron, there is no greater pursuit than to live and study in Jerusalem, while worshipping at Judaism’s holiest sites.

“Ever since I was notified that Aaron went missing in Israel, my office has worked very closely with the State Department, U.S. Embassy and Consular officials in Israel, and the Israeli Embassy in Washington, D.C. While investigators are pursuing every lead, we keep Aaron and his family in our thoughts and prayers.”