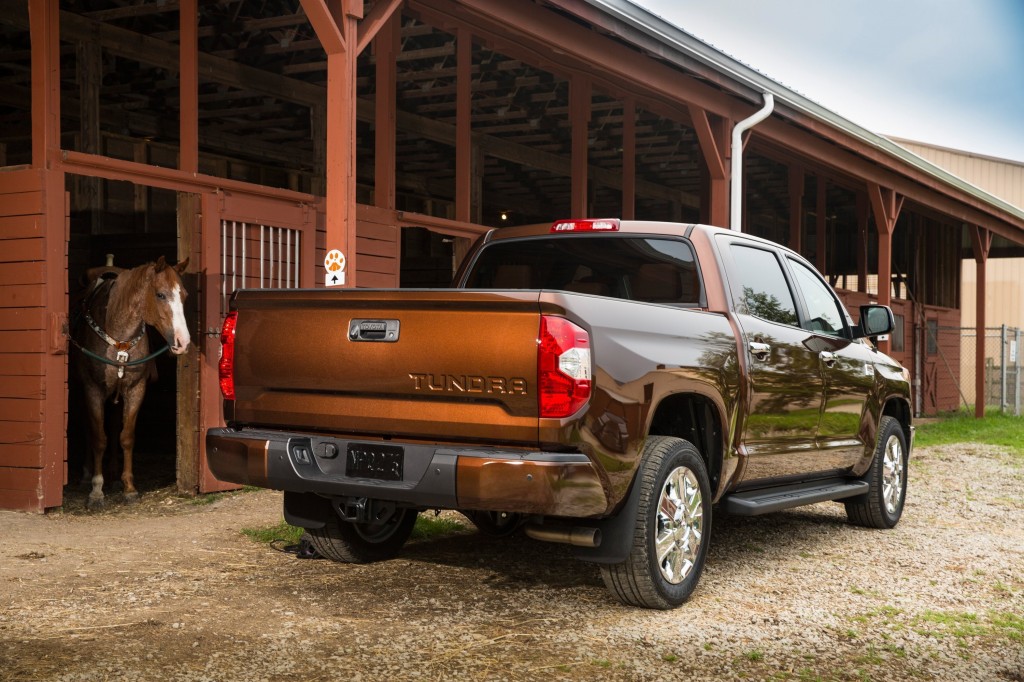 This is the runners-up ball.

Each year, sales of trucks from General Motors, Ram and Toyota are left in the dust by Ford’s F-Series, often by a wide margin. In 2013, Ford’s pickups swallowed nearly 40 percent of the full-size truck market. It was America’s bestselling vehicle for the 32nd consecutive year.

This leaves the Chevy Silverado and GMC Sierra, the Ram 1500 and the Toyota Tundra to fight for what’s left. (Nissan’s Titan also exists, yet with less than 1 percent of the market, it may as well not.)

But that doesn’t necessarily mean these non-Fords should be overlooked. Each has been significantly upgraded in the past year with excellent results.

Here’s a look at all three, very different models, one from each major truck maker. One focuses on efficiency, another on luxury and the third is a heavy-duty work truck.

The Ram’s 3.0-liter turbodiesel makes 240 horsepower and 420 pound-feet of torque. It’s matched up with an eight-speed automatic transmission, and this smooth pairing can tow a whopping 9,200 pounds.

Better yet, the EPA rating of 19 mpg in the city and 27 on the highway is tough to beat. That’s remarkable for a truck that feels like it could tow medium-sized office buildings. During a week of mostly highway drives, we averaged 24 mpg.

While the ample torque was always appreciated for quick initial pickup, buyers should note that 240 horses aren’t a lot for passing or on ramps. But that was the only flaw we noticed.

It piled on nearly the entire catalog, including an upgrade to the crew cab (four full-size doors), all-wheel-drive, navigation, an adjustable air suspension, 20-inch alloy wheels, the RamBox cargo area in the side of the truck bed, heated front seats and steering wheel, and a backup camera and parking sensors.

That’s a hefty price tag, though it’s unfortunately not out of step with the rest of the high-end, full-size truck segment. Regardless, the Ram is impressive, quiet and efficient. No wonder the brand’s sales are up nearly 22 percent for the first seven months of 2014.

It’s odd that the least-expensive truck of this trio is also the one representing the luxury truck market. But Toyota’s Tundra 1794 is actually a bit of a bargain.

Texans buy a lot of trucks, so Toyota aligned itself with the Lone Star state by naming the 1794 after the year that the oldest working ranch in Texas was founded. Toyota opened a plant on this San Antonio site in 2006, and the Tundra has been built there ever since.

The 1794 sits atop the Tundra hierarchy, and our tester costs $49,170. But that gets you a lot of truck. Highlights include perforated leather seats that are heated and cooled up front, a seven-inch touchscreen navigation system, blind-spot monitoring, a moonroof, LED daytime running lights, 20-inch alloy wheels, and a trick rear window that rolls down.

The rear seats on this Tundra Crewmax are so large you could rent them out on Airbnb for the weekend. The rear seat cushions also flip up to stow your gear when not in use.

Despite a third-generation redesign for the 2014 model year, this is not a particularly advanced truck: V-8 engine, six-speed automatic transmission, optional four-wheel drive; that’s it. Fans of fuel-saving technology like cylinder deactivation, eight-speed transmissions, turbocharging or diesel engines should look elsewhere.

The EPA rated our tester at 13 mpg in the city and 17 mpg on the highway. We averaged 15 mpg in a week of mixed driving.

But the 5.7-liter engine and its 381 horsepower and 401 pound-feet of torque can tow 9,000 pounds. And it did deliver effortless, quiet power, making the truck feel light on its feet in daily driving.

While Toyota has always struggled to steal truck sales from the Big Three, 2014 has been a good year for the Tundra. Sales are up by more than 11 percent through July, and with a bread-and-butter luxury truck like the Tundra 1794, we can see why.

Putting the heavy in heavy duty, this tow-friendly monster rounded out our trio.

A 6.0-liter, V-8 turbodiesel churns out 397 horsepower, and 765 pound-feet of torque can tow up to 13,000 pounds. It’s bolted to a six-speed Allison automatic transmission that worked fine, save for a slight shudder when shifting from reverse to drive.

While the Ram’s diesel engine is more of an efficiency play, the GMC relies on its diesel for towing prowess. As a result, fuel economy isn’t much of a concern for this Sierra Denali; the EPA doesn’t even require fuel-economy estimates, because its gross weight is over 8,500 pounds. A week of testing during mostly highway miles left us with an average of 17 mpg.

The engine is plenty strong, though it sounds like a bus. Fortunately, everything in this generation of GM’s trucks and SUVs (including Chevy Silverado, Suburban and Tahoe and GMC’s Yukons) has a quiet interior.

Our only complaint with the road manners of this truck was the suspension. Our tester came with the $255 off-road package that included Rancho shocks. For on-road use, they did little to smooth out bumps.

The rest of the Sierra Denali is plenty refined. GMC is the more upscale brother to the everyman Chevy, and the Denali line takes that one step further.

It also comes with enough USB ports to run a smartphone charging service.

Luxury aside, this is a big truck for big spenders with big things to tow.

Times take: Efficiency and towing prowess make the diesel the Ram to buy

EPA fuel-economy rating: 19 mpg in the city, 27 on the highway

Times take: Low on tech but high on livability

EPA fuel-economy rating: 13 mpg in the city, 17 on the highway