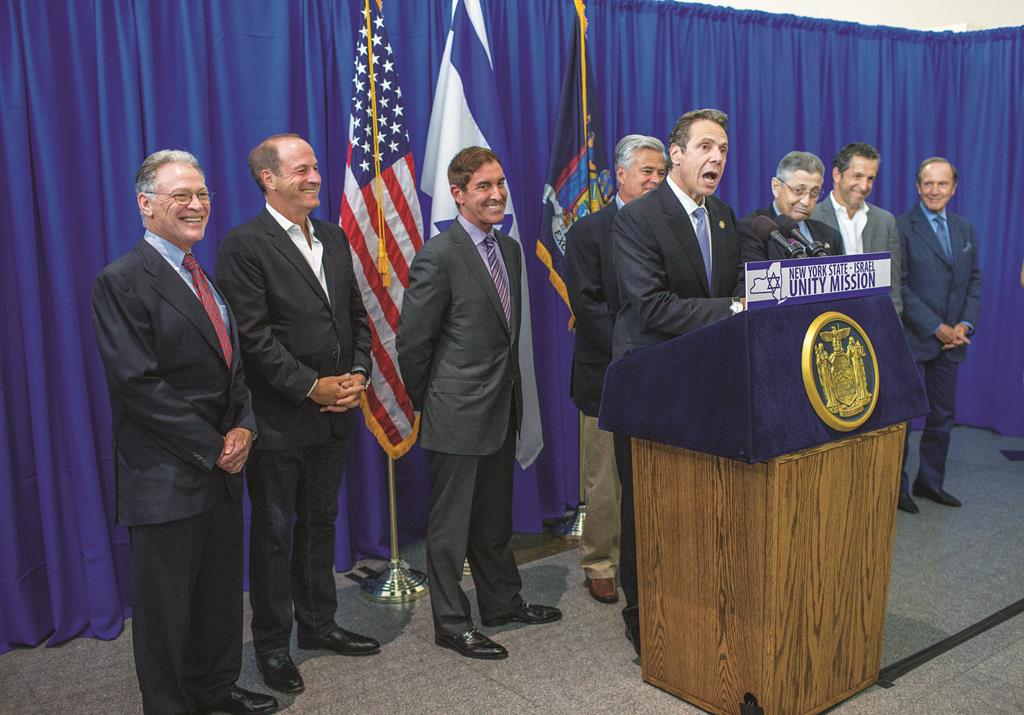 Speaking at the airport before taking off on an El Al Airlines flight to Israel, Gov. Andrew Cuomo on Tuesday dismissed a Palestinian invitation to visit their territories, saying that his maiden international trip as governor is to support Israel’s right to defend itself against terrorism.

“Everyone wants the killing to stop,” said Cuomo, hosting a brief news conference at John F. Kennedy International Airport on Tuesday afternoon. “There is no doubt. But at the same time, Israel must have the right to defend itself.”

Joining Cuomo, a Democrat who is up for reelection in the fall, are Senate co-leaders Dean Skelos, a Republican, and Jeff Klein, an Independent Democrat, along with Assembly Speaker Sheldon Silver, a Democrat.

They all dismissed a letter written on Tuesday by Riyad Mansour, the Palestinian ambassador to the United Nations, inviting the group to visit the Palestinian territories and experience “all sides of the conflict, not just one.”

“The Israeli government protects its people with its missiles,” Silver said. “The Palestinians, from what we know in Gaza, protect its missiles with its people. That’s the fundamental difference.”

Cuomo said that there was no time for a detour to the Palestinian areas on a tightly scripted trip.

“This is a very short trip,” the Democratic governor said. “We’re only on the ground for about 30  hours and it’s been scheduled to the minute. So there is not a lot of flexibility in this trip.”

The group, which also includes business leaders and Daily News owner Mortimer Zuckerman, will land in Israel on Wednesday morning and return home the next day. A Cuomo spokesman says they will meet with Israeli President Reuven Rivlin, as well as with New Yorkers living there to hear their stories and concerns about life under rocket fire.

Cuomo’s re-election campaign said that they will be footing the bill for the governor, as well as staff members going along. The legislative leaders are each paying separately.