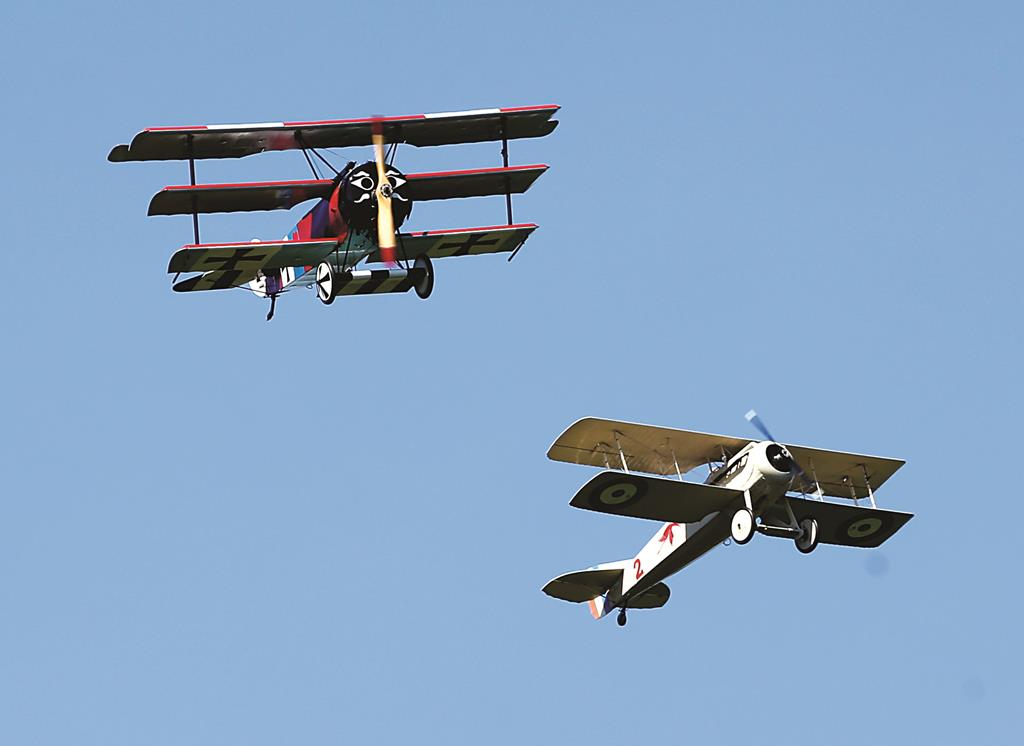 There’s still a place where buzzing biplanes swoop in pursuit of German triplanes, where pilots in open cockpits let their scarves flutter in the wind.

The sights and sounds of World War I flight are re-created regularly at the Old Rhinebeck Aerodrome in New York’s Hudson Valley, where an original American Curtiss JN-4H “Jenny” shares the sky with reproductions of a French Spad VII and German Fokkers.

“I get to shoot down a Fokker triplane every Sunday afternoon,” said air show director Chris Bulko, who flew the Spad. “I call it playing with the toys here and sharing them with everybody else, and inviting them into our sandbox.”

The aerodrome 80 miles north of New York City is one of a few places scattered around the world that put on air shows based on World War I, which began July 28, 1914. The attraction also boasts a museum and hangars packed with planes from the dawn of flight up to World War II. But the weekend air shows bring the crowds. Saturday shows highlight the early history of aviation. Sundays are devoted to WWI.

Men dressed in old-time overalls start balky engines with a hard pull down on propellers. Bulko blows kisses to the crowd on takeoff and chases a doppelganger of the Fokker triplane that was piloted by Manfred von Richthofen (aka the Red Baron). No machine guns here, though pilots show off their skill by flying through falling streams of toilet paper.

Flying could be deadly for the young pilots, some of whom were teenagers. Planes were wood-framed, fabric-covered and flammable. Enemy pilots attacked with the sun behind them to blind their prey, sometimes amid barrages of anti-aircraft fire. Machine guns jammed. There were no parachutes.

“It’s a dangerous business simply because the planes are not reliable, in many respects. They are also sometimes difficult to fly,” said John H. Morrow Jr., an expert in WWI aviation who teaches history at the University of Georgia.

Many of the planes that made it through war were destroyed as surplus, a big reason why originals are so rare. Aerodrome founder Cole Palen bought a few old planes in 1951 when a Long Island hangar at the site of Charles Lindbergh’s trans-Atlantic take-off made way for a shopping plaza. Palen collected pre-WWII planes for the rest of his life and reproduced hard-to-find historical planes, usually with original engines.

In 1960, he put on his first air show at an old farm he bought in the Hudson Valley. Though Palen died in 1993, the not-for-profit organization is now run by other vintage air buffs. Paid pilots and staff are helped by volunteers, many who are enamored of the comparatively clunky aircraft.

The Jenny, for instance, has a top speed of around 75 mph, but pilot and head mechanic Ken Cassens notes it had a “pretty advanced engine for its time” as he gave a post-flight tour of the plane.