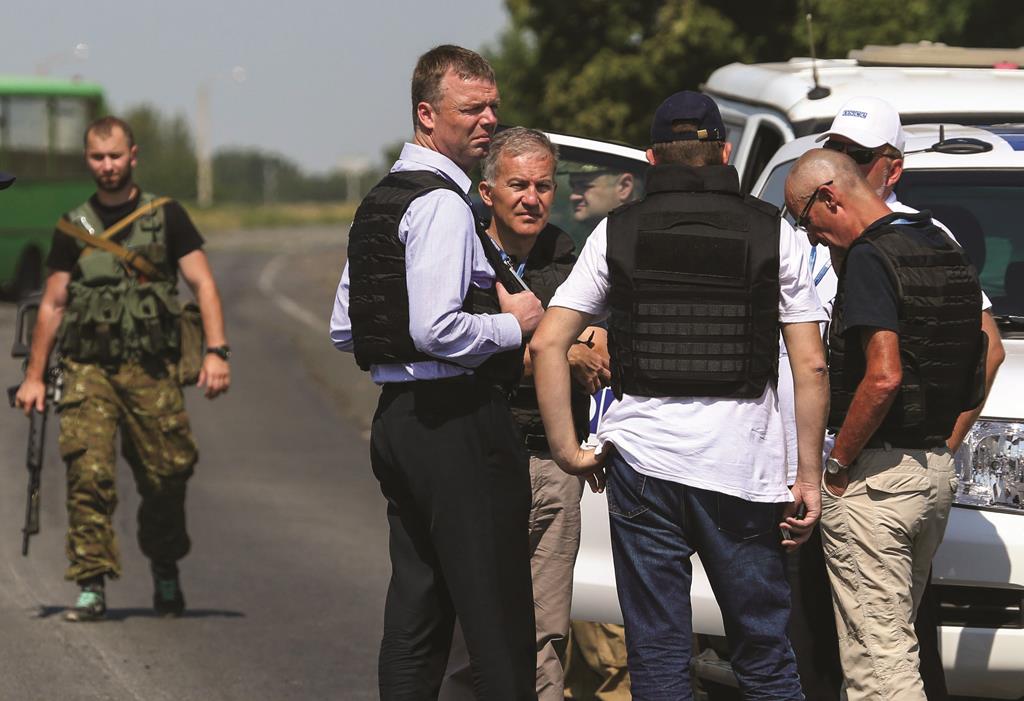 Russia fought back on Wednesday over new U.S. and EU sanctions imposed over Ukraine, where fighting between Moscow-backed rebels and government troops has intensified since a Malaysian airliner was shot down.

The confrontation between Moscow and the West entered a new phase this week, with the United States and European Union taking by far the strongest international steps yet against Moscow over its support for Ukraine’s rebels.

New EU and U.S. sanctions unveiled on Tuesday restrict sales of arms and equipment for the oil industry, while Russian state banks are barred from raising money in Western capital markets.

Moscow said the sanctions were “destructive and short-sighted” and would lead to higher energy prices in Europe and damage cooperation with Washington on international affairs.

On Wednesday it banned imports of Polish fruit and vegetables and said it might expand the ban to the entire EU.

On the ground in Ukraine, heavy fighting between government forces and the separatists has been taking place near the site where Malaysian flight MH17 crashed into wheat and sunflower fields on July 17, shot down by what Washington and Brussels believe was a missile supplied by Russia.

Kiev accused the pro-Russian rebels on Wednesday of fortifying the area, including with land mines, to prevent the site from being properly investigated. The land mine report could not be independently confirmed. Ukraine is party to a treaty banning land mines; Russia is not.

“Russia’s actions in Ukraine and the sanctions that we’ve already imposed have made a weak Russian economy even weaker,” U.S. President Barack Obama said in Washington on Tuesday. “If Russia continues on this current path, the costs on Russia will continue to grow.”

German Economy Minister and Vice Chancellor Sigmar Gabriel said the measures would hurt the European economy but would hurt Russia more. The price was worth paying, he added: “At a time of war and peace, economic policy is not the main consideration.”

Even so, Russian markets rallied, as investors deemed the sanctions less severe than feared, with Russian stocks, bonds and the rouble rising.

Moscow denies Western accusations that it has armed and supported rebels who are fighting Ukrainian forces in eastern Ukraine. But Western countries say flows of heavy weapons across the frontier have only increased since flight MH17 was shot down on July 17, killing all 298 people on board.

Ukrainian military spokesman Andriy Lysenko said the rebels were digging in for battle near the crash site: “They have brought a large number of heavy artillery there and mined approaches to this area. This makes impossible the work of international experts trying to start work to establish the reasons behind the Boeing 777 crash.”

Ukraine’s fragile economy is also taking a battering. Parliament will consider austerity budget amendments on Thursday that are key to receiving IMF support and to assign more financing for the army.