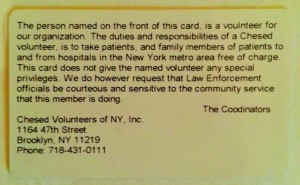 Drivers for chessed organizations such as Chai Lifeline, Shomrim and Misaskim will be able to use special  identification cards that will allow them to transport patients and volunteers without interference from New York City agents, the Taxi and Limousine commissioner said Wednesday.

The agreement with Commissioner Meera Joshi, arrived at during a meeting held at Assemblyman Dov Hikind’s office in Boro Park, followed an incident in June that resulted in a volunteer from the Chesed organization receiving a summons and having his car impounded after he attempted to transport two women  to Manhattan for  medical treatment.

Car services, defined as any car that must be ordered in advance and whose drivers are paid, must be registered with the TLC.

The summons was quickly dismissed and the driver’s car returned, but the event highlighted the need for some classification for volunteer drivers. That led to Wednesday’s meeting.

“Today’s measures will go a long way toward making sure there are no further mistakes by TLC officers in this regard,” Hikind, a Brooklyn Democrat, said in a statement.

The new protocols include the use of identification cards to chessed volunteers, allowing them to easily identify themselves and their function. Phone numbers of registered charitable groups will be given to the TLC to allow officers to contact dispatchers to ascertain that a driver is indeed performing volunteer duties.

Hikind said that the TLC will also undertake additional sensitivity training for their officers, educating them with respect to community traditions such as the frequent use of chessed carpools.

The framework of the agreement having been planned in advance, several chessed organizations prepared ID cards and distributed them to members.

This article appeared in print on page 10 of the July 24th, 2014 edition of Hamodia.