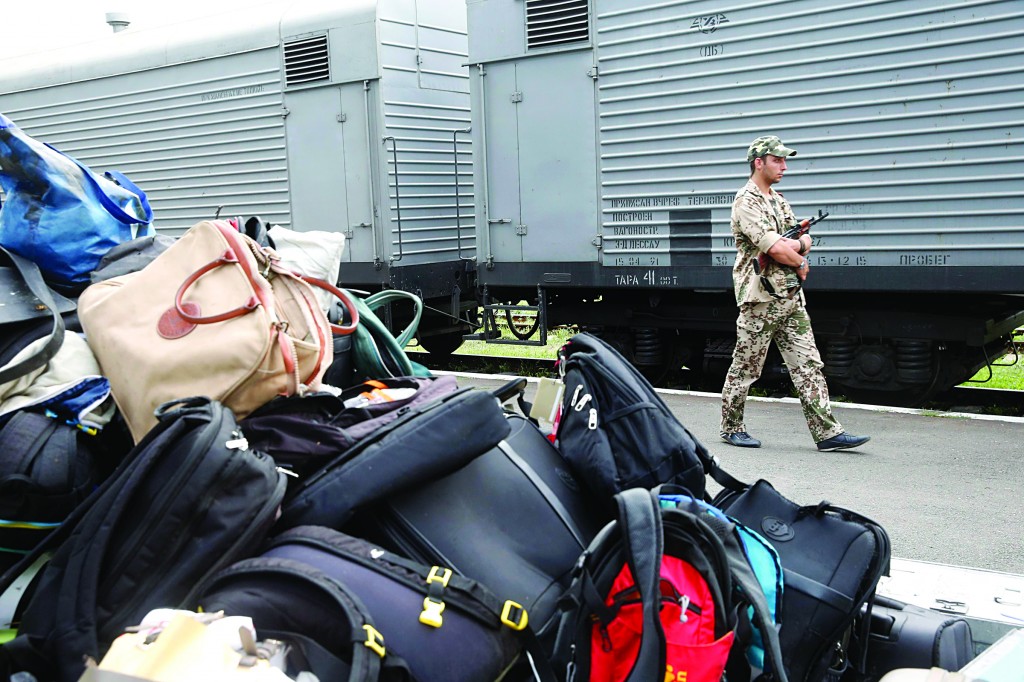 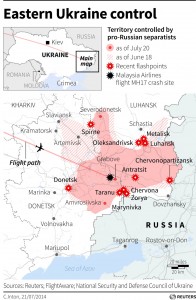 A train carrying the remains of most of the almost 300 victims of the Malaysia Airlines plane downed over Ukraine left the site on Monday, after the Malaysian prime minister reached a deal with the leader of pro-Russian separatists controlling the area.

The aircraft’s black boxes, which could hold information about the crash in rebel-held eastern Ukraine, will be given to the Malaysian authorities, Prime Minister Najib Razak said, indicating he had bypassed Kiev, which has lost control of much of the east.

At the United Nations, the Security Council unanimously adopted a resolution demanding those responsible “be held to account and that all states cooperate fully with efforts to establish accountability”.

The expected handover of the bodies and the black boxes, and reports by international investigators of improved access to the wreckage of the airliner four days after it was shot down, takes place against calls for broader sanctions against Russia for its support for the rebellion, though Western leaders are struggling to agree a united response.

The Malaysian leader said he had reached an agreement with the separatists for recovered bodies to be handed over to the authorities in the Netherlands, where the largest number of victims came from.

Dutch Prime Minister Mark Rutte told a news conference that a train carrying around
200 body bags was on its way to rebel-held Donetsk and then to Kharkiv, which is in Ukrainian government hands, from where the bodies would be taken back to the Netherlands to be identified.

The shooting down of the airliner on Thursday sharply deepened the Ukrainian crisis, in which separatist gunmen in the Russian-speaking east have been fighting government forces since pro-Western protesters in Kiev forced out a pro-Moscow president and Russia annexed Crimea in March.

Shaken by the deaths of 298 people from across the globe, Western governments have threatened Russia with stiffer penalties for what they say is its backing of pro-Russian militia who, their evidence suggests, shot the plane down.

But, with Russia challenging them to produce proof, some of those taking a firmer line are saying the acid test will be if the separatists improve access to the site and Russia stops supporting them.

European Union foreign ministers are due to discuss further penalties on Tuesday, but the most they are expected to do is to speed up implementation of sanctions against individuals, and possibly companies, agreed in principle last week before the plane was brought down.

Emotions ran high in the Netherlands, where prosecutors opened a war crimes investigation.

“It is clear that Russia must use her influence on the separatists to improve the situation on the ground,” Prime Minister Rutte said.

“If in the coming days access to the disaster area remains inadequate, then all political, economic and financial options are on the table against those who are directly or indirectly responsible for that,” Rutte said.

“Now’s the time for President Putin and Russia to pivot away from the strategy that they’ve been taking and get serious about trying to resolve hostilities within Ukraine,” he said at the White House.

European security monitors said gunmen stopped them inspecting the site when they arrived on Friday, and Ukrainian officials said separatists had tampered with vital evidence, allegations echoed by Obama.

“What are they trying to hide?” Obama said.

But the spokesman for the European security monitors said they had had unfettered access on Monday, and three members of a Dutch disaster victims identification team arrived at a railway station near the crash site and inspected the storage of the bodies in refrigerated rail cars.

As they went about their work, fighting flared in Donetsk, some 40 miles from the site, in a reminder of the dangers the experts face operating in a war zone.

The government in Kiev denied sending the regular army into the center of Donetsk, which pro-Russian separatists captured in April, but said small “self-organized” pro-Ukrainian groups were fighting the rebels in the city. Four people were killed in clashes, health officials said.

The rebels’ military commander Igor Strelkov said up to 12 of his men died in Monday’s fighting.

Donetsk is at the heart of a rebel uprising against rule by Kiev, and Ukrainian President Petro Poroshenko has promised to retake the city as part of what Kiev calls its “anti-terrorist operation” against the separatists.

Russia’s defense ministry challenged accusations that pro-Russian separatists were responsible for shooting down the airliner and said Ukrainian warplanes had flown close to it.

The ministry also rejected accusations that Russia had supplied the rebels with SA-11 Buk anti-aircraft missile systems — the weapon said by Kiev and the West to have downed the airliner — “or any other weapons.”

Secretary of State John Kerry laid out what he called overwhelming evidence of Russian complicity in the shooting down of the Malaysia Airlines plane, and expressed disgust at how the bodies of the victims had been treated at the crash site.

“Drunken separatists have been piling bodies into trucks and removing them from the site,” he said on NBC on Sunday. “What’s happening is really grotesque, and it is contrary to everything President Putin and Russia said they would do.”

Media images of the rebel-controlled crash site, where the remains of victims had lain decomposing in fields among their personal belongings, have turned initial shock and sorrow after Thursday’s disaster into anger.

Australian Prime Minister Tony Abbott said he had spoken to Putin for the first time about the disaster. At least 27 Australians were on the flight from Amsterdam to Kuala Lumpur.

Abbott said an Australian investigation team was in Kiev but had been unable to travel to the site. He said there had been some improvement with the Ukrainian government offering access.

“But there’s still a [very] long way to go before anyone could be satisfied with the way that site is being treated,” Abbott said. “It’s more like a garden clean-up than a forensic investigation. This is completely unacceptable.”