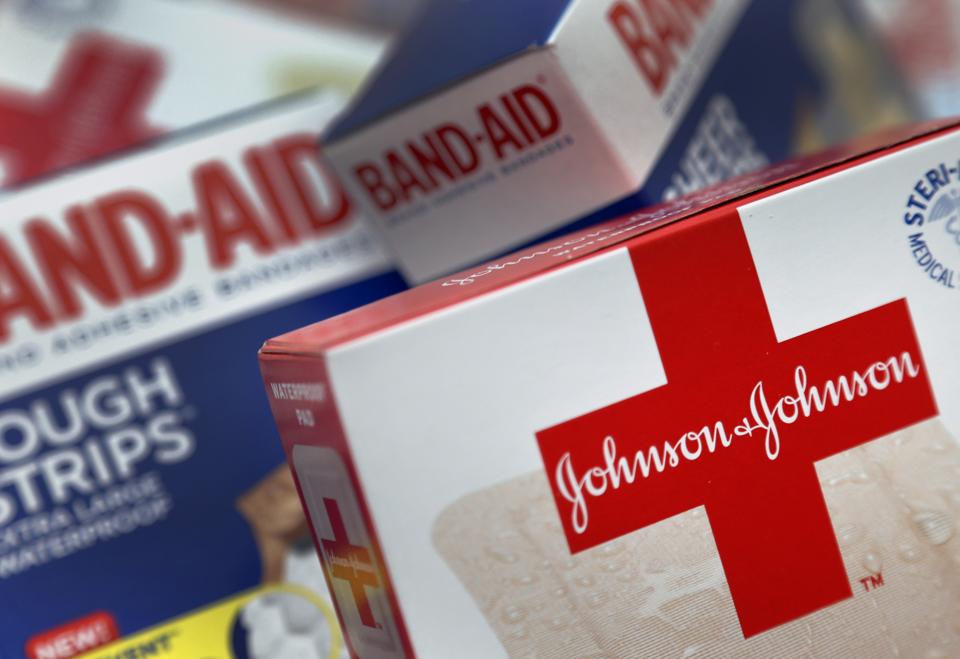 The world’s biggest maker of health-care products raised its 2014 profit forecast for the second time since January, again up by a nickel to a new range of $5.85 to $5.92 per share, excluding one-time items.

Still, J&J shares fell in Tuesday trading after company officials cited two drags on second-half revenue: the June 30 sale of its Ortho-Clinical Diagnostics business for about $4 billion; and expected new competition for Olysio, J&J’s new treatment for chronic hepatitis C. Shares closed down $2.10, or 2 percent, at $103.28.

Earnings, adjusted for non-recurring litigation and other costs, came to $1.66 per share. Analysts surveyed by Zacks Investment Research expected $1.54 per share, on average.

The maker of Band-Aids, medical devices and biologic drugs said revenue rose 9.1 percent, to $19.5 billion, from $17.88 billion a year ago. Analysts had expected $18.85 billion.

The company “seems to have turned the corner on its string of unpleasant surprises, and is delivering mostly positive surprises,” said Erik Gordon, a professor and analyst at University of Michigan’s Ross School of Business.

The New Brunswick, New Jersey-based company said prescription-drug sales rose 21 percent to $8.51 billion. That was led by Olysio, at $831 million in the quarter, as well as Xarelto for preventing heart attacks and strokes ($361 million) and Zytiga for prostate cancer ($562 million). J&J’s two newer drugs for rheumatoid arthritis and other immune-system disorders, Simponi and Stelara, both grew by more than 40 percent, lifting the immunology franchise to $2.63 billion in total sales.

The strong performance of prescription drugs recently has helped it regain the lead over J&J’s device business and offset the lagging consumer segment, which is still recovering from dozens of product recalls since 2009.

Most of J&J’s nonprescription medicines, including Tylenol, Motrin and Benadryl, are now back in stores, boosting their total sales nearly 8 percent to $1 billion. Consumer-product sales increased 2.4 percent to a total of $3.74 billion.