Convention Another Step for Cleveland’s Comeback 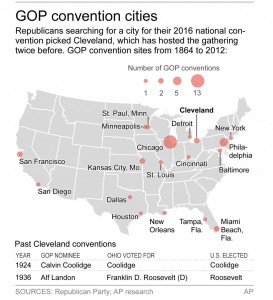 The vote by a Republican panel to make Cleveland its host for the party’s 2016 national convention could be a big step in the city’s efforts to remake a hard-bitten image forged by decades of misfortune.

The GOP’s site selection committee backed Cleveland’s convention bid on Tuesday and the full Republican National Committee is expected to give its approval when it meets in Chicago next month.

It’s not difficult to quantify what hosting the convention will mean for Cleveland and the region. Estimates are that the 30,000 delegates and as many as 15,000 media types would spend more than $400 million during their stays in and around Cleveland.

But local officials have been saying for weeks that it’s not just about the money — it’s about a new image Cleveland can project to the world.

Outside of Detroit, Cleveland’s ailing sister city to the north, few places in the U.S. have suffered like Cleveland has the last 50 years. The population has nosedived. It’s once brawny manufacturing base has been decimated. The Cleveland public school system is a mess. Its sports teams have been mired in mediocrity. Its series of bizarre crimes have created a kind of Gothic urban nightmare.

But what most of the world does not know is how hard the city’s leaders, both political and civic, have worked to burnish Cleveland’s image. The working estimate is that in the last 10 years, more than $4.5billion has been spent or is about to be spent on downtown development. Its streets are not paved with gold, but they are kept clean and empty storefronts have been turned into venues that draw a considerable number of people downtown again.

And, in a city with a declining population, the one neighborhood that has seen growth is downtown, as young adults find it a desirable place to live.

Cuyahoga County Executive Ed FitzGerald is in a tight spot, of sorts. He’s a Democrat running for governor against a popular incumbent, John Kasich, who may or may not be the 2016 Republican candidate for president.

But no one has accused FitzGerald of shirking his duties during the pitch to Republicans. He said his administration started early, even before it took office, in trying to interest both parties to consider some day holding their conventions in Cleveland. Now that it’s happened, he said the city, which is led by a Democratic mayor, and the county will work closely with Republicans to ensure its convention is a great success.

This article appeared in print on page 12 of the July 9th, 2014 edition of Hamodia.