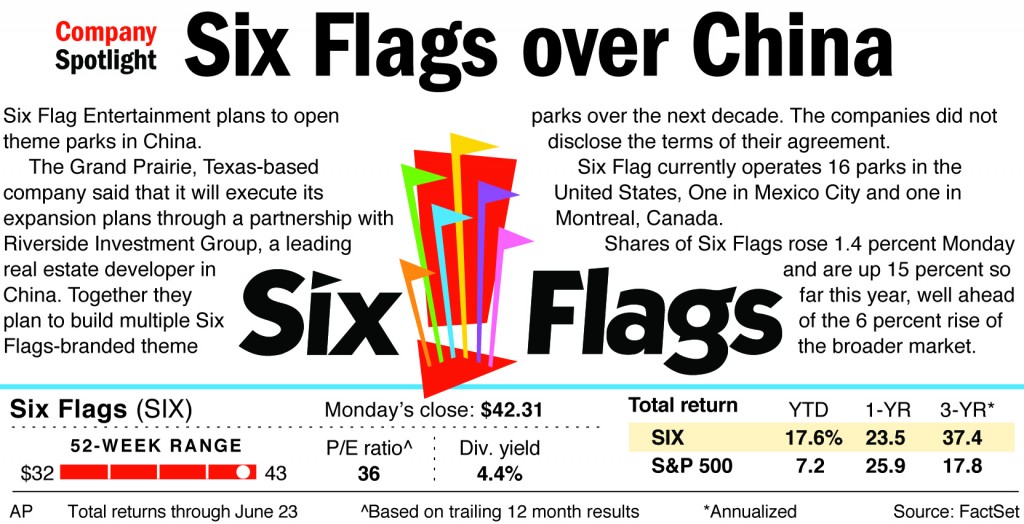 Six Flags said it has formed a partnership with Riverside Investment Group Co., a leading real-estate developer in China, to build “multiple Six Flags-branded theme parks” in China in the next decade.

“Our international expansion strategy is focused on finding the right partners in the right markets, and Riverside Investment Group will be the perfect strategic partner for us in China,” Jim Reid-Anderson, Six Flags’ chairman, president and CEO, said in a statement. “We are honored to be working with this world-class organization as we continue taking the Six Flags brand to growing markets outside North America.”

Likewise, Riverside Investment Chairman Li Zhe said in the statement, “We are honored to enter this strategic relationship with Six Flags and expand the entertainment offerings in China. We are confident this world-class brand and unique form of entertainment will attract millions of guests to our parks.”

Terms of the arrangement were not disclosed. Riverside Investment Group was registered in Canada in 1997.

In April, Six Flags Entertainment said it was partnering with Meraas Leisure and Entertainment, a Dubai-based real-estate development company, to open a Six Flags-branded park in Dubai in the United Arab Emirates. That project is slated to open in 2017, the two companies said. It will be located in Jebel Ali, Dubai’s leading port.

Six years ago, Six Flags announced similar international deals for parks in Dubai and Qatar, but those were never developed. In 2009, Six Flags filed for bankruptcy to restructure $2.7 billion in debt. When it emerged from bankruptcy in 2010, Six Flags moved its headquarters to Grand Prairie from New York.

Six Flags has revenues of $1.1 billion annually and operates 18 parks in the U.S., Mexico and Canada.