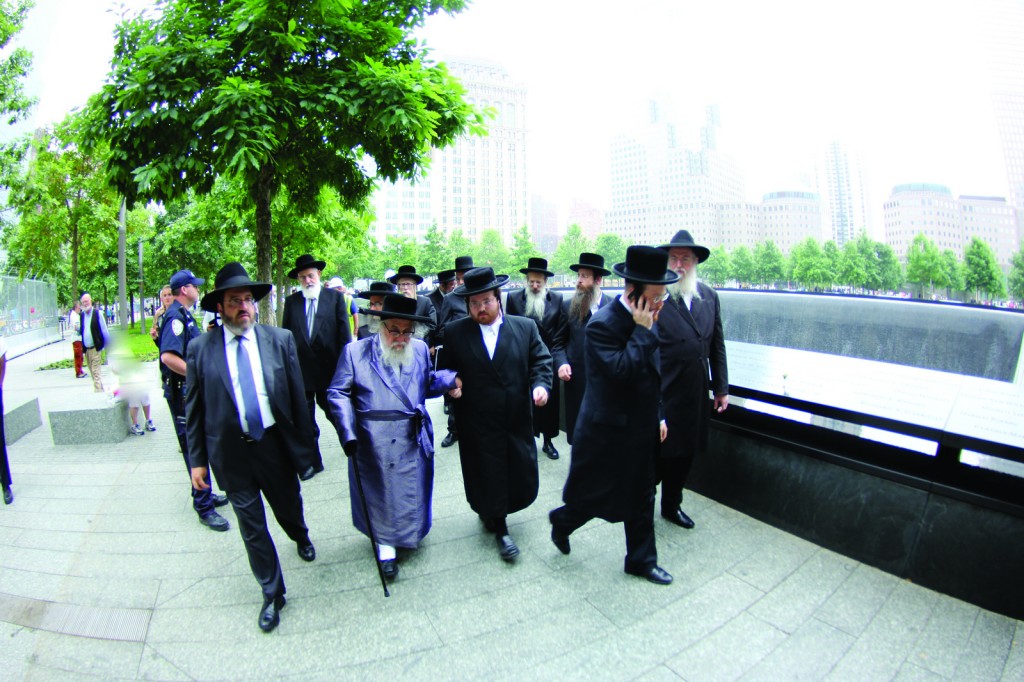 Following a visit Thursday to the newly opened 9/11 Memorial Museum in Manhattan, a broad group of Rabbanim representing the New York City area issued a halachic ruling that Kohanim were permitted to enter the site, even though the remains of thousands of unidentified victims are interred underground.

Harav Yitzchok Stein, the Foltitchaner Rav and the Rosh Av Beis Din of Karlsburg, told Hamodia on Tuesday that last week was the second visit by the Rabbanim to the site of the worst terror attack in the United States.

The Rabbanim were accompanied by Dr. Bradley Adams, who heads the Forensic Anthropology Department at the New York City Medical Examiner’s office and is in charge of all recovery operations at Ground Zero.

The visit was arranged by Misaskim and headed by Harav Yechezkel Roth, the Karlsburger Rav, shlita, and comprised of dozens of Rabbanim from a cross section of Orthodoxy.

“I asked at least 25 questions from the two professionals who went around with us, and they answered very clearly,” Harav Stein said. “Then we consulted with the Karlsburger Rav, we agreed that it was muttar and everybody agreed with that psak.”

Of particular concern was the air conditioning duct that pumped cold air into the morgue, where the thousands of unidentified remains are kept in individual pouches. If any opening led into the building, that would disqualify Kohanim from entering.

However, Adams assured the Rabbanim that the system was totally separate and unconnected to the rest of the building.

“Not only did they satisfy us,” one Rav who participated told Hamodia, “they satisfied us l’chat’chilah.”

Much of the psak was based on a Maharsham, who was asked about a museum in Germany that contained Egyptian mummies. There is also a teshuvah by the Minchas Yitzchak on the permissibility of Kohanim entering a museum that contained soaps allegedly converted by the Nazis from human fat.

In his drashah to his kehillah on Shabbos, Harav Moshe Tuvia Lieff, Mara d’Asra of Agudas Yisrael of Avenue L, marveled at the respect and awe museum workers and security personnel greeted the delegation.

“It was just an amazing thing,” Harav Lieff said. “The whole thing was a big kiddush Hashem from beginning to end.”

Nearly every kehillah in the tri-state area was represented in the visit Thursday, which featured a tour of the layout of the complex.

Following the meeting, the Kedoshim who perished tragically on 9/11 were honored, with the learning of a perek Mishnayos, the recital of Kaddish, Kel Malei Rachamim and Hanosen Teshuah Lamelachim — a tefillah for the welfare of the government.

The visit concluded with Harav Roth showing his hosts a teshuvah he recently wrote in permitting a 9/11 agunah to remarry. The chasunah took place last week.

“It was very moving for them,” Harav Stein said.