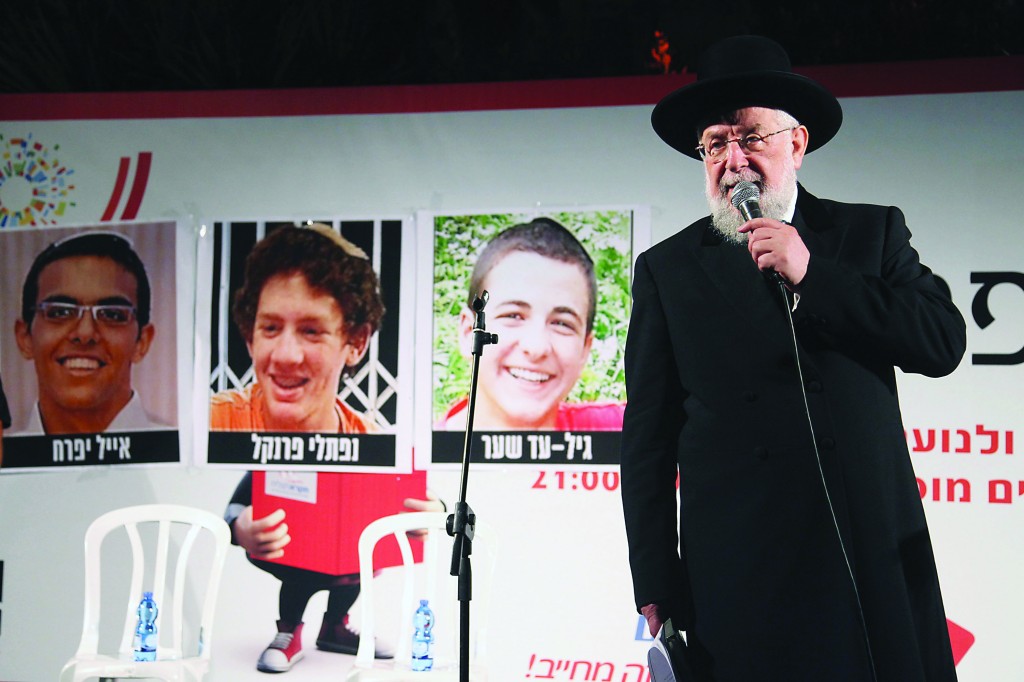 The outpouring of support for the families of the three kidnapped teenagers continued on Monday as family, friends and public officials offered their tefillos and words of comfort, many of them coming in person to visit the families.

Iris and Ori Yifrach, the parents of Eyal Yifrach, spoke with reporters for the first time on Monday, making an emotional appeal to their son and to the nation, and called on the public to continue to pray for their son and the two other kidnapped boys, Naftali Frankel and Gilad Sha’ar.

“Our Eyali, we love you,” said his mother. “The Jewish people is praying for you — look at the beauty of the Jewish people. Hug Gilad and Naftali tightly. You are strong for them and for all of us. Our heart is torn, broken, but with this the heart believes, believes that you [all] will return home  in peace, healthy and whole.”

Mrs. Yifrach thanked the public for their support:

“Our Jewish People, we love you, from all the heart, we feel your warmheartedness to the bottom of our hearts and it passes to our children. This is what gives us strength, in the merit of your prayers, our Jewish people, all of us are strong.”

Eyal’s father said: “We believe this great unity of the people strengthens Eyal, Gilad and Naftali,” he said. “These forces reach the children and in this merit they will be strong and steadfast. We are believers and the children of believers; we believe that everything that G-d does, He does for the good.”

They asked everyone to continue praying and to be united.

At the Knesset, an unprecedented prayer service was led by Knesset Speaker Yuli Edelstein. MK’s from across the religious and political spectrum participated, along with hundreds of Knesset staff, lobbyists and press. They all squeezed into a conference room for Minchah and to recite Tehillim, The Jerusalem Post reported.

Many swayed with their eyes closed as they recited: “From the depths I call to You G-d, G-d hear my voice; May Your ears listen to the sound of my beseeching request.”

Sharansky visited the Yifrach and Sha’ar homes on Monday, and recalled his experience as a dissident alone in a Soviet prison.

“When I was in prison, in total isolation, I felt strong because I knew that world Jewry was standing strong with me. I am certain that Eyal, Gilad, and Naftali are feeling the same powerful support of world Jewry today,” Sharansky was quoted by The Jerusalem Post as saying.

“This is the first time that a kidnapping of a child or anyone has taken place in our community,” Rami Lieber, spokesperson for Nof Ayalon, where the Frankels live, told Tazpit. “The community is a very supportive one — psychologists and social workers have been helping out with the family’s children since the kidnapping.”

“This is a very warm community; we look out for each other. There is an emergency response team made up of community members that takes care of families during times of crises,” explained Berger. “We’ve been working in shifts, taking turns to bring dinner and anything else the Frankel family needs during this time.”

“We feel like we’ve been receiving a big hug from everyone,” says Ittael Frankel, an aunt of Naftali’s. “I know that everyone is doing everything possible in Israel and outside — it’s a big help.”

From the U.S., the family of Naftali Frankel, who has dual citizienship, has received an outpouring of support from friends and family.

Frankel’s grandparents moved to Israel from the Flatbush neighborhood of Brooklyn in 1956. Although Fraenkel, 16, was born and raised in Israel, he paid brief visits to the U.S. while growing up, said his aunt.

On Sunday night, over 300 people from Nof Ayalon and the surrounding area gathered for tefillos in the community’s yeshivah for the safe return of the three boys, Ynet reported.

As members of the press waited for the prime minister’s wife, Sara Netanyahu, to arrive at the Frankel family on Sunday evening, Adi Berger, a neighbor, made her way through the crowd carrying a plate of food and snacks that she and other neighbors had prepared.

“We are heartened by the response, of people gathering to daven, little children saying Tehillim, older people crying out to Shamayim in tears. We are moved by it, we thank you and ask you to continue,” said Rachel Frankel, Naftali’s mother, on behalf of the parents of the three teenagers who were kidnapped by terrorists last Thursday night.

In answer to the parents’ request, their names have been on the lips of hundreds of thousands of Jews in Israel and around the world during these days: Naftali Frankel (Yaakov Naftali ben Rachel Devorah), Eyal Yifrach (Eyal ben Iris Teshura) and Gilad Sha(Gilad Michael ben Bat Galim).

As many as 50,000 people came to the Kosel to daven for the boys, Hamodia’s Hebrew edition reported on Monday morning. The gathering was representative of all those whose hearts go out to the families of the boys, all types of Jews from all walks of life, and all ages, were there together, davening for Hashem’s mercy.

It was noted that the huge crowd appeared spontaneously. There was no formal organizing effort, only word-of-mouth and the deep feelings of the solidarity of Klal Yisrael together in a time of anguish brought them there.

Earlier in the day, Rabbi Lau had issued a call to the thousands of emissaries of Chabad around the world to join in a unified tefillah at 7:00 p.m. “This is the time for unity,” wrote Rabbi Lau, “to show that all Jews are responsible for one another … We will show our enemies that Am Yisrael chai v’kayam, the People Israel lives.”

Prayer rallies have been held throughout the country, and not only among the religiously observant. In Tel Aviv, for example, hundreds of secular Jews gathered in Rabin Square, where Rabbi Yisrael Meir Lau, Chief Rabbi of Tel Aviv, led them in prayer for the safe return of the boys.

On Erev Shabbos, over 2,200 young people from Tel Aviv participated in an atzeres tefillah for the three teenagers, part of a program including a Leil Shabbos meal organized by Chabad.