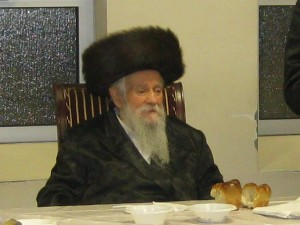 Orphaned at age 4 in Depression-era America, Aharon Yaakov Brandwein was charged by the previous Skverer Rebbe, zt”l, with a mission: Preserve and continue the venerated name of Strettin.

At the time of his petirah on Shabbos morning, it was a mission accomplished.

“All my years I gave away my blood for Strettin,” the Strettiner Rebbe of Boro Park wrote in his tzavaah.

The Rebbe, who was 79, devoted vast resources and years of his
life to finding manuscripts and disseminating the teachings of Strettin, Strelisk and Alik. He established a beis medrash on Boro Park’s 47th Street and had an open house for hundreds of people seeking direction in life or who needed a compassionate ear.

“He was a real fartzeitishe Yid who soaked up the old world and gave it over to his children, grandchildren and Chassidim,” his son-in-law, Rabbi Naftali Friedman, told Hamodia as he was returning from the kevurah.

Aharon Yaakov was born in 1935 to Harav Yechiel Mechel , the Turka-Strettiner Rebbe, and Rebbetzin Rivka Necha Brandwein. Tragically, his father was niftar when he was just 4 years old. Undeterred, he was firm in his belief that he must keep the glorious Strettiner tradition alive, he said in later years.

“He kept himself strong through everything, with the entire chassidishe levush,” Rabbi Friedman said. “He wasn’t mevater on anything.”

His insistence on preserving the handiwork of his ancestors received an endorsement from Harav Yaakov Yosef Twersky, zt”l, the previous Skvere Rebbe, in 1963. Following his chasunah to his Rebbetzin, Rochel Freida, the daughter of Harav Naftali Teitelbaum, the Etchete Rebbe, the Skvere Rebbe made the couple a sheva brachos and urged the chassan to become a Rebbe.

“Your father was a Rebbe, you have to continue [the Chassidus],” the Rebbe said.

In truth, the Strettiner Rebbe was from a previous generation. His sister, 40 years his senior, was married to Harav Pinchas Dovid Horowitz, zt”l, the first Bostoner Rebbe who lived from 1876 to 1941.

He barely remembered his illustrious brother-in-law, but he was close with his nephews, Harav Moshe and Harav Levi Yitzchok, zt”l, the Bostoner Rebbes of Boro Park and Har Nof, respectively. Although many years his senior, they respected him as a Rebbe from a prior era.

The Rebbe initially lived in the Beis Medrash Elyon community in Monsey, before he moved to Boro Park. He made it his life’s mission to find unpublished manuscripts of his forebears and bringing them to the light of day.

The Rebbe was niftar on Shabbos morning, with his two sons surrounding his bed.

The levayah was in the Strettiner beis medrash, where, upon his strict instructions, there were no hespeidim. His two sons and his son-in-law said divrei pereidah, followed by Reb Mendel Seidenfeld, who in name of kehillah, appointed the Rebbe’s son, Harav Yechiel Mechel Brandwein, the new Rebbe.

Kevurah was in the Beth David cemetery in Elmont, Long Island, near his father and mother.

Shivah will be observed in the beis medrash, 1811 47th Street, until Friday afternoon.

This article appeared in print on page 1 of the June 16th, 2014 edition of Hamodia.