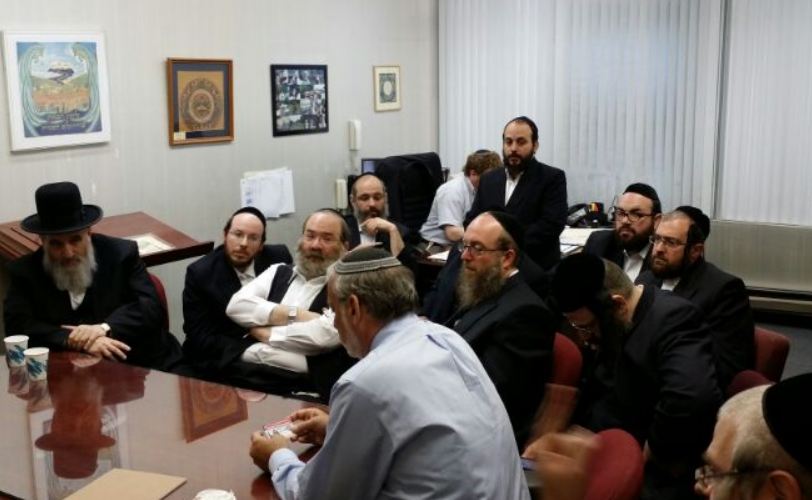 Following the mistaken impounding by a traffic agent of a Chesed car taking patients to hospital treatments, commissioners from New York City’s Taxi and Limousine Commission met with Jewish officials to devise a new protocol to protect volunteers.

Ray Scanlon, Bella Vais and Allan Fromberg of the TLC met Friday at the Boro Park office of Assemblyman Dov Hikind to discuss the incident which took place last week Monday and draw lessons from it.

Yeshaya Liebowitz, a Chesed volunteer from Boro Park who was transporting two women for cancer treatment at Manhattan hospitals, was stopped by an agent and had his car impounded. The agent falsely wrote in a summons that the women had called a dispatcher and were then seen paying the volunteer.

Car services, defined as any car which must be ordered in advance and whose drivers are paid, must be registered with the TLC.

Liebowitz’s car was returned hours later, along with an apology from the TLC. But it was obvious that the agency was unfamiliar with the extensive volunteer system in Orthodox areas, where several transport groups take — free of charge — patients to medical appointments or family members for hospital shifts.

“I tried to explain that Chesed is a [volunteer] organization, it is not hired, it wasn’t for money,” Liebowitz told Hamodia last week. “But he didn’t want to listen.”

Chesed notified Yanky Meyer, founder and president of Misaskim, a disaster relief organization, who tweeted about the incident. That set off a swamp of condemnations by city officials.

As the following day was Shavuos, a meeting was arranged for Friday, which was also attended by Chesed and Shomrim officials.

The new protocols call for identification cards to be issued for workers from Chesed and similar organizations to better identify themselves as charity volunteers, phone numbers supplied to the TLC allowing officers to contact charity group dispatchers to ascertain that a driver is legitimate, and sensitivity training for TLC officers.

“Our objective today was to avoid additional problems in the future and I believe these initial protocols that we agreed to today will go a long way towards that end,” Hikind said.