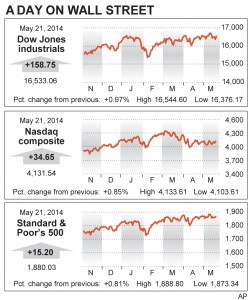 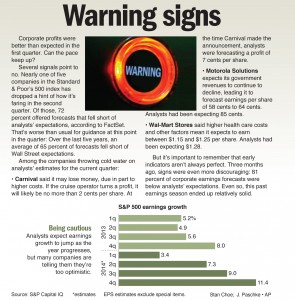 Major U.S. stock indexes mounted a solid comeback Wednesday, recovering their losses from the prior day and finishing on track for a weekly gain.

It was the Dow Jones industrial average’s biggest gain in five weeks.

In the absence of any major new economic data, investors focused on companies reporting quarterly earnings or otherwise garnering headlines.

Tiffany & Co. was a favorite early on, vaulting more than 9percent on a sharp increase in earnings and revenue.

Investors got a closer look at discussions held by the Federal Reserve’s policymakers in their most recent meeting last month. Wall Street’s reaction was muted, however, and the market kept on the upward trajectory it set upon early on.

U.S. index futures rose before the opening of regular stock trading. The market opened higher and stayed in positive territory throughout the day.

“Since there was no real solid news to continue into a two-day sell-off, we’re getting a little bit of a bounce today,” said Joe Peta, a managing director of Novus.

The Dow and Nasdaq remain down for 2014.

Bond prices fell, driving the yield on the 10-year U.S. Treasury note up to 2.54 percent from 2.51 percent late Tuesday.

All 10 industry sectors in the S&P 500 rose, led by consumer discretionary and energy stocks.

The stock market has fluctuated between gains and losses on an almost daily basis as investors try to get a better handle on the trajectory of the economy following a weak start to the year.

That pattern continued even after the S&P 500 hit a high early last week.

In all, the market has changed course from one day to another nearly 60 percent of the time so far this year, something not seen since 2008 during the financial crisis, Peta said.

“It is a schizophrenic market that doesn’t seem to have much of a memory from one day to the next,” he said.

The Fed meeting minutes released Wednesday shed little new light on a key question for many investors: When will the Fed start raising interest rates?

Fed officials discussed how to unwind the support the central bank has given the economy once they decide to begin raising the Fed’s key short-term rate. Because the economy is still recovering, most analysts don’t think the Fed will start raising rates before the second half of 2015.

The market got a more detailed look at corporate America with a new batch of company earnings.

Tiffany said its earnings spiked 50 percent in the first quarter as worldwide sales jumped by double digits and the company raised its prices. The results beat analysts’ expectations and the jeweler raised its earnings forecast for the year. Tiffany’s stock jumped $8.07, or 9.1 percent, to $96.30.

Online payments system provider Qiwi vaulted 20.7 percent after the company raised both its profit and revenue outlook for 2014 after a strong first quarter. The stock rose $7.21 to $42.12.

Not all stocks had such a good day.

PetSmart dropped $5.17, or 8.3 percent, to $57.02 after the pet store chain reported disappointing revenue for the first quarter and slashed its earnings outlook for the current quarter and year.

Trading volume was lighter than usual Wednesday, something that’s likely to continue this week as the Memorial Day weekend nears.

Investors will get a fresh batch of data on housing and the economy on Thursday, as well as earnings from Hewlett-Packard, Best Buy and Sears, among others.

This article appeared in print on page 8 of the May 22nd, 2014 edition of Hamodia.