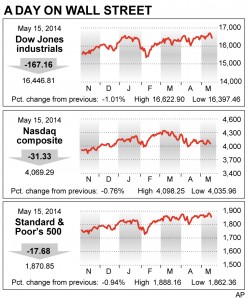 Investors retreated from stocks Thursday, leading the Dow Jones industrial average to its worst day in five weeks, after disappointing earnings from Wal-Mart and mixed news about the global economy.

The latest economic data from the United States was mixed: Factory output fell. But fewer people sought unemployment benefits, evidence that hat solid hiring should continue. The news was more disappointing in Europe, where the economy of the 18 countries that share the euro saw output rise just 0.2 percent in the first quarter.

“People are just a little bit nervous about the entire global economic environment at the moment,” said Ryan Larson, head of U.S. equities at the Royal Bank of Canada.

The Dow was dragged down by Wal-Mart, which fell $1.91, or 2.4 percent, to $76.83. The company reported lower earnings for its most recent quarter and warned that the current one was not expected to be much better.

The company, like many other retailers, blamed harsh winter weather. Department store operator Kohl’s fell after announcing a drop in first-quarter earnings. Kohl’s ended down $1.82, or 3.4 percent, to $52.21.

One bright spot was Cisco Systems. The telecommunications equipment maker jumped $1.37, or 6 percent, to $24.18. It was one of only two stocks in the Dow 30 to rise. Cisco reported earnings that were better than expected.

But the bigger story of what happened on Wall Street was in the bond market.

Bonds had their best day since early February, when measured by the Barclays U.S. Aggregate bond index, a broad gauge of the entire market, from Treasurys to corporate debt.

The yield on the U.S. 10-year note hit its lowest level in 10 months, dropping to 2.49 percent. At the beginning of the week, the 10-year had a yield of 2.66 percent. That is an extraordinary move for bond yields.

Typically, such a movement in the bond market would signal that there was something wrong with the U.S. economy. But recent economic data has been mixed at worst. For example, the Labor Department reported lower factory output for last month, but released a report showing the number of Americans who filed for unemployment benefits fell to a seven-year low.

To add to the mystery, U.S. consumer prices rose at their fastest pace in nearly a year in April, the Labor Department said Thursday. The consumer price index, an often-quoted barometer of inflation in the U.S., rose by 0.3 percent last month due to higher food and gas prices. Inflation is on pace to rise 2 percent this year. While not alarming, it is noticeably higher than a year ago.

In a normal environment, investors don’t buy bonds at 2.5 percent interest if inflation is running at 2 percent. It’s just not worth it.

One explanation is that foreign buyers raced into the U.S. Treasury market looking for safety, causing a distorted move in prices, traders said. Despite their fall, yields of U.S. government bonds are higher than those of some developed economies.

The Russell 2000 is down 9.3 percent from its March 4 high, and at one point Thursday fell into what is known on Wall Street as a correction. That is when a stock or stock index falls 10 percent or more from a high.

This article appeared in print on page 8 of the May 16th, 2014 edition of Hamodia.